After an almost perfect edition in November 2021, Welcome to Rockville was back 6 months later for 2022 at Daytona Speedway with such an almost perfect line-up. With bands such as KISS, Papa Roach, Korn, Megadeth, Guns & Roses, Shinedown, Smashing Pumpkins and Nine Inch Nails headlining, it was hard to ask for more.

On Thursday, under direct sun and a temperature approaching 45 degrees Celsius, many attendees were inconvenienced by the heat to say the least. Fans could be seen spraying water on themselves at the various mist stations, and fire hoses were installed in front of the various stages to refresh the most adventurous, patiently waiting for long hours to see their favorite band up on the barricade. 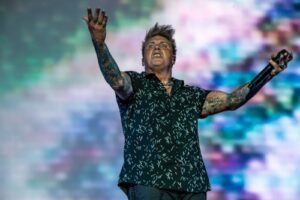 Favorite performance on Thursday, without a doubt, was Jacoby Shaddix and Papa Roach who opened the evening with an energetic performance so intense even the SiriusXM Octane team (who were present at the time of their performance) came to ‘headbang’ with the fans. Starting the hour long set with their brand-new song ‘Kill the noise,’ Papa Roach revisited several of their biggest hits including the most popular with the crowd, ‘Last Resort.’ The band was then followed by Five Finger Death Punch where pyrotechnics, confetti and interactions with the huge crowd were on the menu. A moment of contemplation and a flag signed later to recognize and appreciate the service of the hundreds of soldiers on site. Lead Singer Ivan was able to thrill people giving an incredible performance. In order to close this perfect first day as well as to close their last tour, the legendary band KISS took to the the main stage. Staying true to themselves, Make-up, Full costumes, moving platforms and pyrotechnics were on the docket for tonight. Although no new songs have been released since 2012, the band has been able to corral the crowd with an onslaught of their greatest hits. 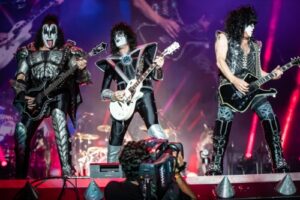 After a Thursday without problems, the weather was unfortunately not on the side of festival organiser Danny Wimmer Presents for the next 2 days. Strong thunderstorms as well as hurricane type wind warnings forced the closure of the site on several occasions through Friday and Saturday. Bands such as Bush, Dirty Honey, Alexisonfire, Sick of It All, Saul, Underoath, Breaking Benjamin, Skillet, Rise Against as well as the 2 headliners Korn and Guns N’ Roses were all cancelled to a great displeasure of fans. We must not forget that May is the beginning of hurricane season in Florida and that all this, while not expected, was normal for the area from June through to November. Nevertheless, 2 bands, Ministry (Friday) and Shinedown (Saturday), gave memorable performances late evening in the rain shortly before the site closed. The crowd, ignoring the rain, sang-along, simply refreshed and happy to escape daily lives by enjoying one of their favorite artists. 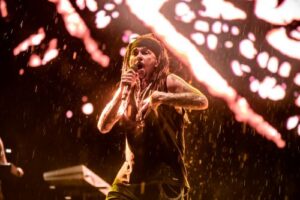 Following 2 chaotic days, filled with frustrations and hateful comments on social networks, the sun and heat retuned Sunday to close the 11th edition of Welcome to Rockville in style. The day went as planned, with no evacuations or schedule changes. I don’t know if DWP had planned this day, or if it was just a coincidence, but women were in the spotlight on Sunday! With bands such as Motor Sister, Lilith Czar, Lacey Sturm, Bones UK, Spiritbox, Poppy, The Pretty Reckless and Halestorm, women who dominate in the world of Rock/Metal music were very well represented. Surprisingly, DWP might have misjudged the popularity of the Mongolian band The Hu who gave their performance on the Rockvillian side stage, (a smaller stage with little space for the crowd) where an extremely large crowd piled up and overflowed into nearby rest and dining areas in order to have the chance to see them live. After this experience, The Hu is undoubtedly ready for the big stage. 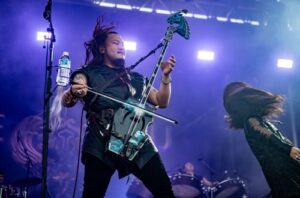 Nine Inch Nails had the chance to rock the stage and close out this year’s Welcome to Rockville at Daytona Speedway on Sunday, May 22. After releasing 2 albums simultaneously at the beginning of the pandemic, the band is finally back on the road in the UK as well as the United States with their 2022 tour. Despite their 34 years of existence, the band has lost none of its energy and was able to please fans by playing a barrage of their biggest hits, but not one piece off the new album, maybe saving for the tour. Following many complaints from fans due to cancellations, and since this is not the first time the weather has hindered proceedings of the festival. Welcome to Rockville, regardless of location, Danny Wimmer Presents have stepped up and made offerings of discounted tickets for next year, or partial refunds for this year’s pass holders.

Dates for May 2023 have already been announced, but no confirmation of bands so far. If you haven’t had the chance to attend one of DWP‘s festivals yet this year, there are still dates and tickets available for Louder Than Life (September in Louisville, KY) and Aftershock (October in Sacramento, CA) festivals. Do yourself a favor and pick some up today, there are NOT to be missed. 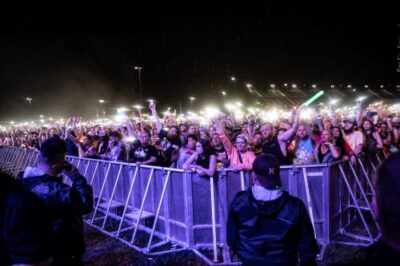 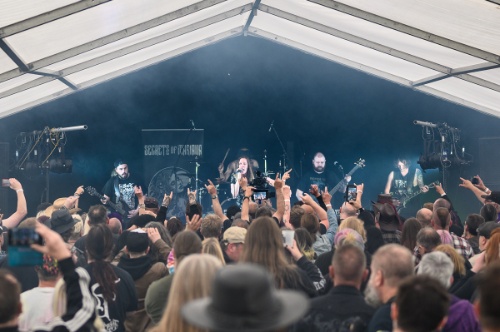