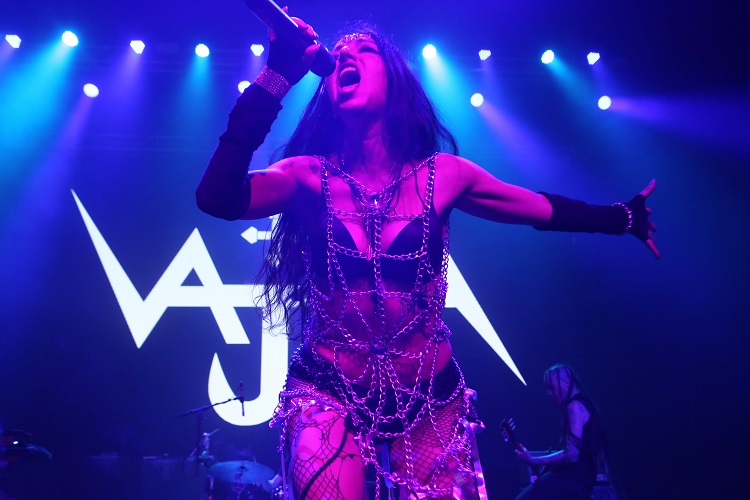 “We will be back on the road after three years. It’s been such a wild, difficult ride during that time for all of us, and we can’t wait to finally share space and experience playing songs from ‘Irkalla’ live for the first time ever.” – VAJRA 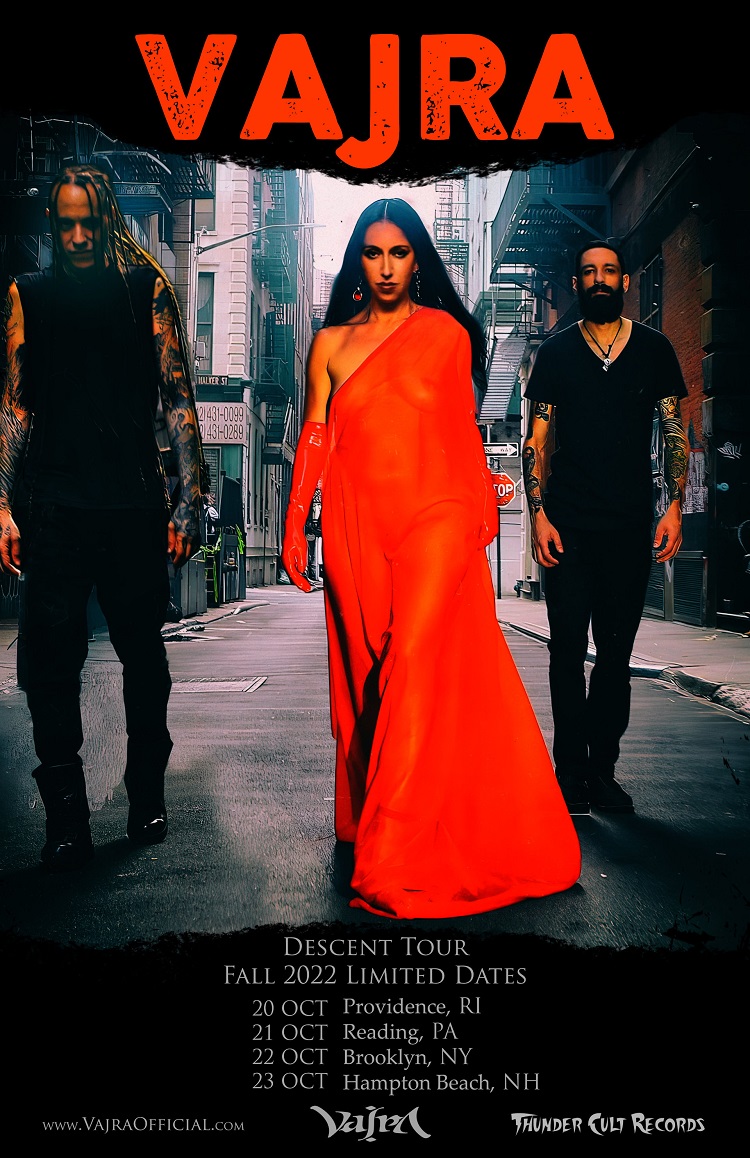 The band has also released the official music video for “Crown or Crucify.” The single, which reached TOP 40 on the Mediabase Active Rock Chart, is off of their Thunder Cult Records released EP, Irkalla.

“We are currently in the studio with Sahaj Ticotin (Ra, Motley Crue) recording the second album, follow-up to our ‘Irkalla’ EP, which was released last year. Also, in the spirit of Jane’s Addiction’s “The Gift”, we’re creating a 100% DIY short film, inspired by the Sumerian classic hero myth ‘The Descent of Inanna‘.” 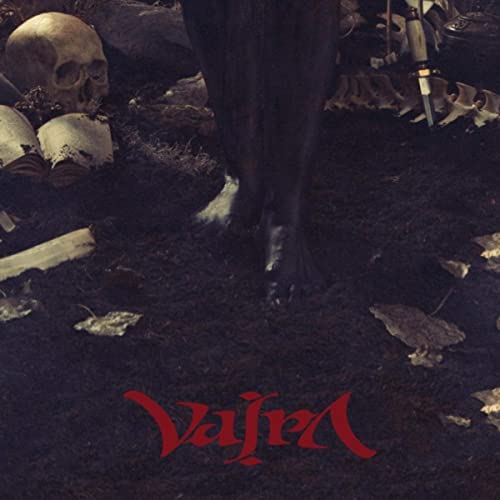 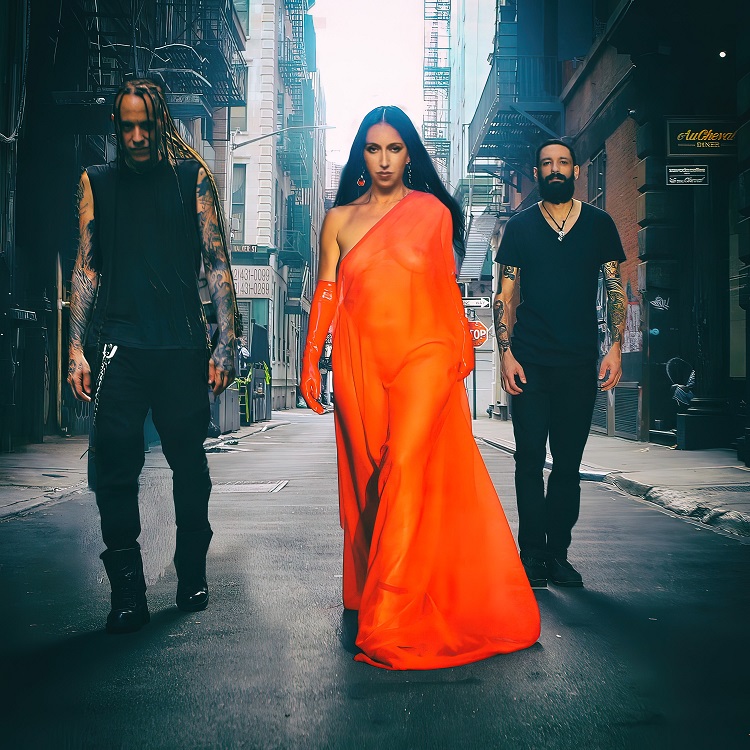 At its core, Vajra can be called dark rock, but the spectrum isn’t always pinned to the tinges of the abyss. Hauntingly dark and hypnotic, Vajra’s music weaves Eastern Indian themes with melodic, progressive rock, creating foreboding and mysterious lullabies. “The influences are varied,” affirms Pinna. “Living in different places like Mumbai, Tuscany, NOLA, San Francisco and New York color my experience. Dad was a monk before he met my mom, and his spirituality has infused the way I perceive my experience. I’ve studied yoga, meditation, dance, composition at Julliard and law, and I have this condition called Synesthesia, which affects how I process music. Nature, life, art, Tarkovsky, von Trier, Kubrick, Lynch, philosophers and consciousness astronauts (e.g., Terence McKenna, Alan Watts, Baba Ram Das, Joseph Campbell, etc.), mysticism, the occult, history, dance and politics are influences. Musically, it’s a lot of everything including Tool, A Perfect Circle, Om, Classical Hindustani, Alice In Chains, Duran Duran, Black Sabbath, Deftones, Pink Floyd, Kate Bush, Fever Ray, soul music, The Mars Volta, etc. And, I believe there is divinity in creativity.”

“We are travelers who go outside the bounds of a sense-based perception to catch a musical or lyrical idea and then translate it to the material realm. When we get out of our own ways, we are translators or conduits for energies that move through us. Honoring what comes through is important for us. Musically, lyrically, and visually we explore what we are driven to explore, and we release what we decide to release when the time is right,” offers Pinna. “It’s mainly instinct. We usually release on auspicious days. For ‘Irkalla’, each release also was released on a day that was a derivative of three in terms of numerology. For ‘Pleroma’, it was the summer solstice.”

The long silence between debut self-produced cult album Pleroma (2012) and the group’s inspiring and mind-bending EP, Irkalla – both featuring powerhouse session drummer and long-time friend, Blake Fleming (ex-The Mars Volta) – was the product of a rigorous touring schedule and a complex confluence of unexpected life events that paused Pinna’s songwriting. Indeed, the creation process for Irkalla pushed forward in the darkest shadows and the most brilliant of lights.

“Things shift and move throughout the album depending on the song and each moment within the song,” Pinna reveals. “Perhaps the music and lyrics of Irkalla reflect an esoteric space to explore the dark night of our souls. What is important is that the music may provide a portal to go on a journey. The journey will be different for each individual. My musical heroes have done this for me.”

Conceptually, Irkalla is the first part of a trilogy exploring the various levels of consciousness. Not the medical definition, but rather the philosophical (Eastern and Western) and esoteric. The use of the Sumerian word, “‘Irkalla’,” which is a mythological Underworld of sorts for which there’s no return, is both metaphorical and literal. The trials and tribulations Pinna experienced while writing Irkalla appeared overlapping and ceaseless: her own personal Hell. Like an alchemist, she used her venture into the lowest level of consciousness as a theme that slithered throughout the album’s six snake-like songs. The metaphoric association to the ancient Underworld also plays out in the bonus tracks on Irkalla , where Vajra deconstruct their influences and spirit animals into a three-part music ritual dedicated to the Shadow Queen (her Sumerian name is Ereshkigal and her Greek counterpart is Hekate).

“Irkalla focuses on the lowest level of consciousness,” Pinna says. “It is the base, material, selfish, ego aspects of ourselves (i.e., the ego-driven, lie, cheat, steal, aspects of the self). It is the place that we must shine a light and acknowledge before we move to the next levels of awareness. Also, I’m obsessed with the Sumerian history right now. I was contemplating Goddess energy, and when and what prompted what I see as an imbalance between the masculine and feminine energies. I was wondering what it really meant to have a God and why it was considered, by some, a ‘He.’ I’m also fascinated by what is behind the concepts of heaven and hell.”

Irkalla was produced by New York native Daniel ‘Sahaj’ Ticotin (Ra, Mötley Crüe). Pinna was introduced to Ticotin in 2018 after both were on different spiritual missions while in India. The twosome hit it off as former expats and with similar interests in music. The majority of the sessions were captured in Los Angeles, with keyboards and some harmony vocals being put to proverbial tape at Pinna’s home studio in New York. The drums were also tracked in upstate New York at a different studio by Fleming. Based on his impressive work for the non-album single, “The Mirror,” Vajra again hired two-time Grammy winning studio ace Camilo Silva F. Between Ticotin’s sage experience as producer/mixer and Silva’s deft mastering job, ‘Irkalla’, with all its hidden caves and spectacular peaks, sounds positively explosive.

For sure, Vajra have the future pegged to today with the launch of riveting music videos and the broadcast of their striking Tas Limur (Volto, Tool) designed cover art. It’s from here that the adventurous outfit will continue to unfurl angels and demons, light and dark, as they prowl into the future on new indie Thunder Cult Records.

“It’s time to get to know Vajra” – Loudwire

“Powerful, catchy and sentimental all at once.” – Revolver 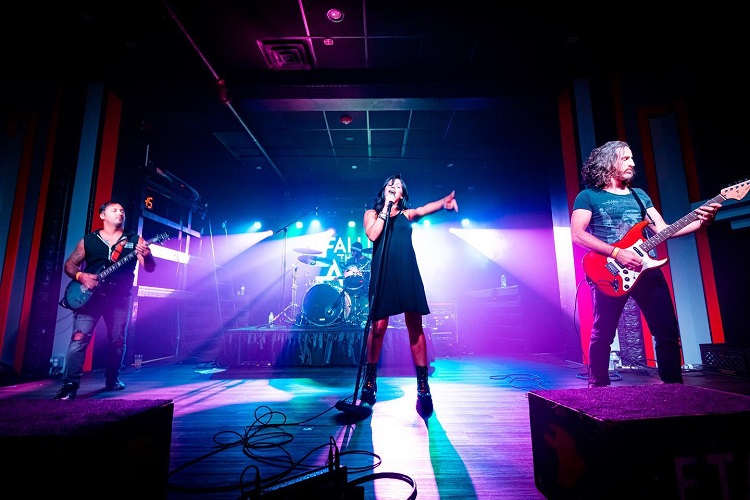 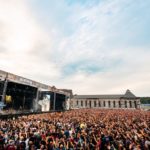