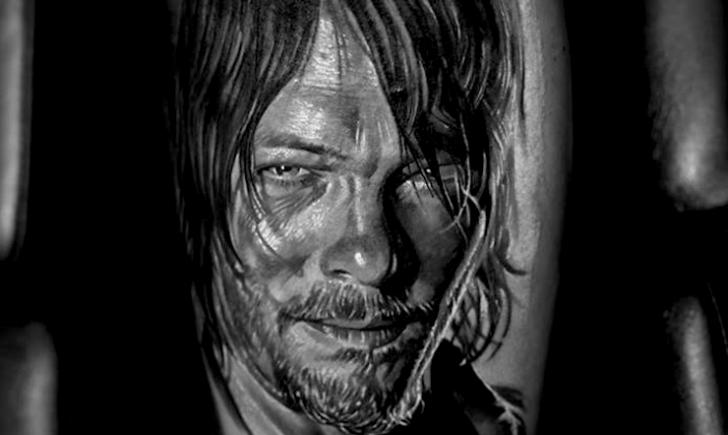 With each new season of AMC’s The Walking Dead, comes a fresh batch of Walking Dead tattoos from all over the world. This show about the zombie apocalypse based on the comic book of the same name (which is still ongoing by the way), has become a phenomenon unlike any other. Its fans are true lovers of the story, of the characters, and of course, the zombie genre. Everyone has their favorite characters. Most of the female fan base is in love with Daryl, who is not even an original character from the comic book, but entirely created for the show. Fans wait for each new seasons and are at the edge of their seats every Sunday night. Without giving too much away, and trying to avoid any spoilers, here is the new crop of Walking Dead tattoos preceding Season 7. Enjoy these Top 10 Walking Dead Tattoos:

Daryl Dixon, in a hero pose in just another normal day of fighting the zombie apocalypse.

Here we see Michonne and Daryl as part of this Walking Dead sleeve that includes other iconic zombies and scenes from the show, including the infamous “DON’T OPEN, DEAD INSIDE” sign on the double doors that sent chills up fans spines in Season 5.

A classic zombie from the comic books is chillingly iconic, and perfect for a tattoo.

Oh Maggie. I can’t say enough about how this tattoo makes me feel.

Hyper-realistic Daryl tattoo for all the Daryl lovers out there!

Rick, the ultimate hero and leader, seen here with his main weapon of choice.

Look at the detail of this tiny tattoo of that iconic zombie from the very first episode.

So much of the story can be seen on this fan’s back. Most of the seasons are represented in this realistic, black and gray Walking Dead tattoo.

Carol, who is a night and day different character in the show than in the comic book, has also become a fan favorite. She is ruthless but has a heart of gold. 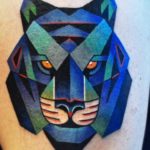