Tattoos in Borneo – The Living Practice

Borneo on its own is an interesting place. Despite its size – it’s actually the third-largest island in the Asian region – the country managed to remain largely unoccupied in the early stages of modern history. The country has remained massively preserved due to this, and currently houses one of the oldest rainforests in the world.

But their claim to history fame is more than just their impressive rainforest. The tribal communities living in modern Borneo have actually been traced back to those who lived there over 50,000 years ago. Let that sink in a moment… the same blood line, the same families, have been living in the same place for over 50,000 years. That’s impressive. I don’t know about you – but my family doesn’t stay put for even a few years.

There are several different tribes living within the island, including the Ibans, Kayans and Kenyahs, but they are all covered under a blanket name: Dayak. The Dayak tribes are some of the most fascinating in world history. They believed strongly in magic and ritual, similar to the Aztecs, but with an even stronger sense of community and social structure. These ancient tribes were strongly associated with headhunting, which had an intricate function in their rituals and belief in magic. Alongside headhunting, tattoo played a large part in their belief system and ritualistic lifestyles. During the early years of the tribe’s history, tattoos had meaning, generally associated with magic or the afterworld. For example, hand tattoos. During life, they stood for status, but during the process of death, these hand tattoos became of even greater importance. The Dayaks believed that the tattoo would glow, illuminating the pathway to the River of the Dead where the deceased would find his or her final resting place in the Otherworld.

Although some tattoos within the Dayak culture span across all of the tribes, there are some significant differences in other designs and formats that vary by tribe. The men of the Kayan tribes, for example, tattoo for ornamental reasons – strictly for decorative, body improvement purposes. The Sarawak Kayans, however, tattoo the backs of their hands and fingers if they have taken the head of their enemy. If the defeat and beheading of the enemy was a result of a group effort, those who took part in the process are allowed to only tattoo one finger – generally the thumb. Members of the Kayan tribe that live along the Mendalan River only allow their Braves – their warriors – to tattoo the back of their left thumb. That is, unless they have been classified as a ‘head-taker’, in which case, they receive a tattoo on the upper thigh. This, to the Mendalan Kayans, is the highest honor of tattoo marking. The women of the Kayan tribes utilized a much more complex approach to tattooing. Their designs, which were of greater complexity and size than that of the men, would span the reaches of their forearms, backs of the hands, the entire thigh through to the knee, and the feet. This process would take place over approximately four years, beginning with the fingers and uppers of the feet when the female child reached the age of ten. The entire ordeal had a specific, ritualized order. The year following completion of her fingers and feet, the young girl’s forearms would be completed. The next year would see her thighs partially completed, with the next sequential year completing the project. It was extremely important that this process be completed before the young girl was of childbearing age, as the Kayans deemed it immoral to be tattooed once becoming a mother. It was a widespread believe that the tattoos would allow the women to enter the Mythical River of Teland Julan after death, while untattooed women would not even be allowed to approach, let alone bathe. When it came to the application of tattoos, there was also a strict ritual exercised by the tribes of Borneo. Men would carve the designs to be used into wooden blocks but would never actually perform the final process. It was considered to be a woman’s job. The tools used by these tattooing women were rudimentary. The artist’s set was often kept in a wooden box and included two or three ‘prickers’ and an iron ‘striker.’ The ‘prickers’ were crafted from wood and resembled a rod with projected sharp points at the tip. The head of the object was fastened to a chunk of resin which had several sharp, needle-like objects rooted inside. The ‘striker’ was simply a small portion of iron partially covered with string. The ink substance was crafted from soot, water, and sugar cane juice, and generally kept in a small wooden cup of some sort.

To being the process, the women would smear ink across the designs carved into wooden blocks – the only part of the process the men were allowed to participate in. These blocks resembled stamps, with the design being carved to stand above the surface of the block. They were then pressed firmly into the skin in order to leave behind an impression of the design. Assistants of the artist would stretch the skin around the area to be tattooed, usually with their feet. The ‘pricker’ would be coated with the ink pigment and would be moved along the imprinted design while being struck across the top with the ‘striker,’ thus pushing the ink-covered needle under the skin. As it sounds, the process was extremely painful and, as there was no disinfectant of any sort, would often ulcer upon completion.

The markings employed by the Borneo tribes were similar in design to those of their surrounding neighbors, such as Bali and Java. Some reoccurring themes presented in Borneo island tattoos are figures of dogs, stars, and what is known as a rosette – a design believed to resemble the eye of the dog. Most surprisingly, comparable designs, methods, and instruments have been located in Polynesian tattoo patterns. This find has archaeologists speculating that the art form was shared between Stone Age tribes worldwide – quite an extraordinary task, given the lack of internet or social media! Even with the increasing technology and processes of today’s modern tattooing, these island tribes continue to utilize the traditional designs and methods of their ancient culture. While it may sound barbaric to you or me, they are upholding their cultural history and allowing historians a rare glimpse into history – the living history of the island’s tattoo culture. 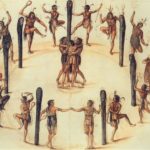