A CONVERSATION WITH ERIC BASS FROM SHINEDOWN – CAROLINA REBELLION 2016

Shinedown is an incredibly successful American rock band. If their name doesn’t ring a bell, you’ve definitely heard at least one of their songs playing on the radio at one point or another. They’ve gone through a few lineup changes through the years, yet remained consistent with the quality and style of music they create, getting better and louder as they go. Smash hit after smash hit, Shinedown understands how to satisfy the eardrums of their hardcore fan base as well as new fans.

We were not originally scheduled to interview any members of Shinedown at Carolina Rebellion, but when offered some time to chat with Eric Bass, we were thrilled. The talented bassist shared a bit about how he met his current bandmates, what it’s like to play overseas, and also let us in on the meaning behind some of his tattoos.

Eric:  We do what we can…pick up whatever scraps we can…

Rockwell: You’re going to be headlining tonight in front of 80,000 people.

Eric: I love it man. I love it wherever they show up. We can play for 80,000 people or for a theatre. It doesn’t matter how many there are as long as they’re giving it back to you. It’s really nice when there’s 80,000 giving it back to you. People always ask: “what are your favorite shows that you’ve played?” I’ve got two that spring to mind. One is the Download Festival in the UK, you know 100,000 people jumping up and down. The other one is the first time we went over to Europe. We played a small place in Glasgow, Scotland that I’m sure a lot of people have played. King Tut’s Wah Wah Hut, it holds about 200 people. That was one of the craziest, best shows I’ve ever had. It’s all about crowd reaction.

Rockwell: Tell us about the new album.

Eric: We came out with a new album called ‘Threat to Survival’. We worked really hard on it. We had several different producers on it and one of them was myself. We actually had eight different mixers on the record.

Rockwell: They let you Produce (joking)?

Eric: That’s actually what I did before I was in the band. That’s how I met the guys in Shinedown. I Produced ‘Cut The Cord’ and we’re really really proud of it. It’s probably the most organic record that we’ve done process-wise. Everything was getting done all at one time. It was great… it was like a big melting pot of creativity.

Rockwell: You’re on tour with two of the bands playing this festival, who are those two bands?

Eric: Right now we are actually sort of on tour… We’ve done five or so off shows with P.O.D. and Five Finger Death Punch. First of all, the P.O.D. guys, we have nothing but love for them. They’re fantastic people with fantastic vibes and we love hanging out with them. Five Finger… it’s so much fun to play with them and we’re actually going on tour with them later in the year. We’re super excited about that, and once again great people. Tour has always been about family no matter who the bands are. It’s your home away from home so everyone has to be comfortable and we do our best to have a really good family environment on tour.

Rockwell: Let’s talk about your ink. What do you have so far?

Eric: This arm is basically just lyrics from different things that I love. I’m not sure if I want to blend it all together, I kind of like the way it is, patchy like this. This is probably my favorite tattoo that I have, it’s my compass. It’s faith, hope, love and home. I’m from the South so home is in the South… and then faith, hope and love. It kind of ties around to this. These are just all my things that interest me. Heart on the sleeve… I know it’s not a new concept but it’s just who I am. I had a bucket list goal to fly in a jet so the wing is for that, and then there’s a microphone. I’m filling it all in. I’ve got some hot rod stuff on the inside here.

Rockwell: We’re getting the cut sign from the TM so we’re going to end it here. Thank you for your time Eric and we’ll see you tonight from the pit. 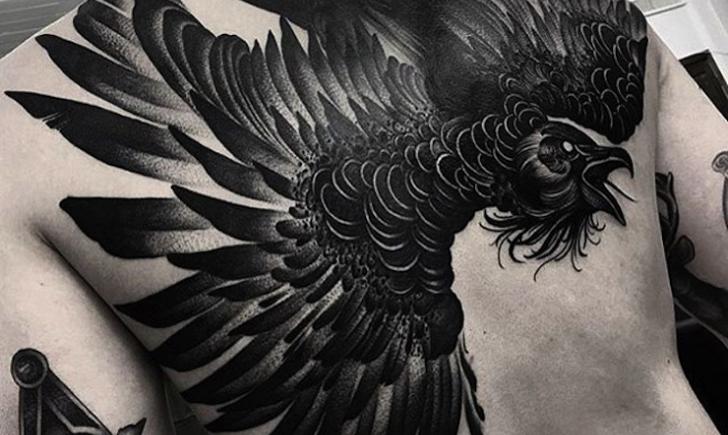