Though it was their third year onboard, Buckcherry did not perform at ShipRocked 2017. But frontman Josh Todd and Stevie D didn’t leave their fans hanging empty-handed, as they performed songs from Spraygun War, a brand new electronic/rap project. These two beautifully tattooed gentlemen also performed with the all-star ShipRocked 2017 version of “The Stowaways”.

When they had a moment off stage to talk shop, Mischievous Mel cornered them for a few minutes to talk about the new project, their tattoos, the artists who did them, and the stories behind them. 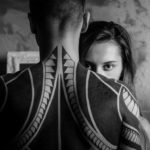