Rock On The Range Day 3 Recap

posted by ROCKwell UnScene
After three days of insane weather that included delays and a couple evacuations, Rock On The Range came through with a grand finale of performances by Metallica, Primus, Amon Amarth, Suicide Silence, Volbeat, The Dillinger Escape Plan, Nothing More, Royal Republic, As Lions and more. The SOLD OUT crowd sat through a torrential downpour waiting to see Volbeat finish their set along with the weekend’s headliners, Metallica, perform at the largest Rock festival in the U.S.

Day 3 included an acoustic set by As Lions in the Zippo tent performing the last of the “Zippo Sessions” of the weekend. If you want to see the video from this performance check out the Zippo Sessions online. Awestruck… that is the only way I can explain this acoustic set. We have seen this band plugged in a few times while doing this festival tour. They certainly are on their way to taking over the world.

The Dillinger Escape Plan… this picture really does say a thousand words!

Nothing More has been in the studio, or “Cave” as front man Johnny calls it for the past year. They previewed a track or two at Rock On The Range that will drop next month and stated that the full album is to follow.  I think every fan will agree that Johnny is not only a stellar vocalist, but he is one bad ass drummer. He showed off his dual skills on Day 3 as he rode the “Scorpion”.  When you see this band perform you get a Jim Morrison vibe meets TOMMY LEE DRUM KIT VIBE- all comparisons aside, this band is really in a league of their own.

Suicide Silence’s set included fans doing the wall of death followed by a massive circle pit. Fans and trolls alike have taken upon themselves to go after the band for the new direction of the music, but at the end of the day the fans are fans and come out in force to support.

The sold-out ROTR crowd that rode out the storm got one of the best sets Metallica has put on to date. I watched the fans as much as I did the band. One of my favorite parts of the set was to see all the body passing during “Unforgiven”. I had to wonder why the hell would you body pass to a slow song?  Along with body passing, cell phones (today’s version of lighters) were held high and waving. The crowd sang almost every song in unison. Everyone in the stadium seemed to be participating. I saw the security staff, gate people, and cops rocking out. It was a beautiful sight to see so much love for the music, the moment, and live music. What a way to end Rock On the Range.
Besides an epic weekend of music, there were tons of activities to participate in.

You could challenge the Marines to a push-up or pull-up contest.

There was a comedy lineup (as I wrote this, Jim Breuer was heading to the Comedy tent to headline the Sunday night show).

You could purchase instruments and audio gear at the Music Experience tent – we scored a sweet Phillips audio recorder with 2 XLR cable inputs.

If you are suffering from, or know someone suffering from cancer you could support Fxck Cancer.  They are the musical equivalent to the “Make A Wish Foundation” in the music community.  One of the ladies they were able to get side-stage for several bands included this lovely lady in the pink Fxck Cancer tee. 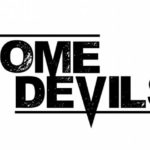