Rock On The Range Day 2 Recap

So what happens when Mother Nature proves she is a whore and delays day 2 of Rock On The Range?  Well Rock on the Range and the bands  do what Rockers do, in true Rock ‘n Roll style, the show rolls on and it did here. Among the bands taking the stage on day 2 included: Frank Carter and the Rattlesnakes, One Less Reason, Skillet, Alter Bridge, Kyng, Ded, Taking Back Sunday, Coheed & Cambria, Papa Roach, The OffSpring, Korn and more.

For those of you who don’t know what DWP and AEG festivals have to offer, I want to enlighten you. In addition to all the killer bands you get to see on stage, the insane food and merch options, these festivals feature a unique and interactive experience called The Music Experience. It’s like a mini-NAMM. At their exhibit, they have several instruments on display that you can play, including guitars and drums. You can also check out the latest sound gear products, and more. Not a musician but love music? You can check out tents like Zippo, where you can see big name bands play intimate acoustic shows. Among those bands were Suicide Silence. Before their acoustic performance, they stopped by to hang out with us. “The new album is coming out slow. There is a backlash from the fans that we knew would come.” That is what Eddie Hermida said about the album and the new direction. He and Chris Garza get raw and real about music, the album, and of course ink! Full interview coming soon.

While walking the grounds at Rock on the Range I took some time out to chat with a few people. I met two guys who wanted to be part of my Instagram post. I was panning the area that included the Fxck Cancer tent, THE MUSIC EXPERIENCE, and the Zippo event tent. They were die-hard music fans. We talked for about 20 mins about the band that got them into music. They were huge fans of the 80‘s and 90‘s so when they found out the lineup for the Sold Out Rock On The Range they had to be there. These two men were not only music fans but served our country. Horns off to you guys for not only knowing how to get your Rock on but for serving.

Also hanging with us was Taking Back Sunday’s Shaun Cooper! Want to know what they’re all about? Stay tuned for the interview coming soon. That said, their onstage performance was on point, high energy, and well… a must see.

Papa Roach has been and always will be the bar that I set is the TOP BAND.  Frontman Jacoby Shaddix has been from the start the human form of what music is, passion, emotion, energy, he gives all fans an experience, not just a show. To this day he explodes with the same pizzaz as he has from day 1. I am so excited about the new album “Crooked Teeth” out now. If you were at Rock On The Range today you had a chance to see songs performed live. Fans embraced the new music with not just open arms but with excitement and in my opinion this is Papa Roach at their best.

I have seen Papa Roach more times than I can count and I have to say that I have left a bigger fan every time, but tonight I saw something that made this performance the best now and forever.  The Fxck Cancer participant was on stage during the whole set. From her wheelchair, she was able to not only see the show but to be on the stage. Watching her expressions and seeing her smile and rock out tore at my heart strings. Thank you to Fxck Cancer and Papa Roach for granting this experience.

There is no lack of iconic bands and newcomers at Rock On The Range. One of the newcomers is Ded. This was my first time seeing them live and I became an instant fan. If you like it heavy, you’ll love Ded.

Day 2 of Rock On the Range ended with Korn blowing up the stage. The masses of music fans were elbow to elbow as one of the best bands in the world wowed them.  For those of you fortunate enough to make this part of your festival experience, horns up to you. For those that missed it make sure to save the date for next years Rock on the Range. 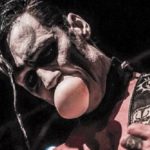