Aftershock came to a close with a grand finale of star-studded rock and metal acts including Puscifer, Ghost, Chevelle, Disturbed, KoRn, and an incredible performance by American rock and roll heroes, Avenged Sevenfold. With mixed emotions of having music withdrawals to wanting to sleep in, ROCKwell UnScene is here to give you a quick recap of Sunday’s festivities and show you some amazing photos of this year’s event.

As usual, DWP didn’t miss a beat this weekend. From the epic lineup, to the parking options, to the layout of the festival grounds and perfectly coordinated set times from one stage to the next, they had their eye on every last detail to ensure every fan would leave happy and beyond content, counting the days ’til next year’s event.

Every festival attendee had a chance to experience performances by legendary artists on three stages. One example being Max and Iggor Cavalera. When Max stopped by ROCKwell UnScene, he said that Aftershock was a great event. The only challenge they had was figuring out how to consolidate their usual one hour+ show into half the time. “We chose the songs that we thought were important and stuck to the Roots mostly”. We can imagine that with so much material from their myriad of projects, it was hard to narrow it down. We’ll be sharing the full interview with Max right here at Tattoo.com.

Suicide Silence also made an appearance – not only on stage, but with us back stage. We chatted tour, album, and ink.

Whitechapel performed on Sunday as well. From where we were in the pit, the sound from the stage was so fierce and intense the ground was shaking beneath our feet and beating through our chest. It was awesome. The walk back to the media tent was about a half a mile away from the other stages and the crowd was elbow to elbow for more than half of that – we ran into about five or six mosh pits on the way back.

The experience at Parkway Drive was similar. Many people were new to the Australian metal band and left a diehard fan. The body passing was continuous through the 30 minute set and the crowd was ravenous for more.

The second to last band on the bill was KoRn. One fan we spoke with described KoRn as two different bands in one. “I listen to their albums a lot and love their music, but hearing them play live is such a different experience. Jonathan is the frontman of all frontmans. He feeds off the crowd’s energy and gives everything he has to make sure every fan in the audience enjoys the show. This is one of the greatest live bands you can see. They bring it in full force, every single time.”

An up and coming band that we have been a fan of for some time now is the Mendenhall Experiment. They are a hard rock/metal band that has used music to heal. The founding member, Brandon Mendenhall, has Cerebral Palsy. He was told he would never play guitar. Yesterday he and his band opened the main stage at sold out Aftershock. Booyah! That folks, is what you call inspiring – proof that if you want something bad enough, keep working toward it and refuse to give up – it can happen! We got a chance to talk with the band before their show and will be sharing that interview with you soon.

As the festival season takes a temporary break (key word: temporary), let us just say that DWP is hands down, one of the finest event organizers we’ve ever worked with.  When attending any of their festivals, you feel welcome, safe, and at home among a crowd of tens of thousands. With all the potential chaos that could occur, there is an incredible sense of order through and through. Trust us when we say, this doesn’t just magically happen – the team at DWP works their asses off to ensure that the moment you enter the front gate, you can push all the bullshit in your life aside, let loose for a weekend, and share an unforgettable experience with an amazing community of fellow rock and metal fans. Thanks to DWP and Monster Energy to making the 5th annual Aftershock an experience of a lifetime.

Click ‘Continue’ to see more pictures of performances from this year’s event.

Be sure to stay tuned to ROCKwell UnScene and Tattoo.com for all things music (including coverage and photos of TOOL at Aftershock!). 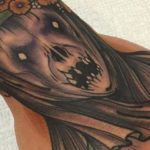