Every once in a while you run into some familiar faces out in public, especially at music festivals. It may have been years since your last pow wow, or perhaps they are a mere acquaintance that just happens to have all the same interests as you and are known strictly by face.

The 2016 Vans Warped Tour in Bonner Springs, Kansas proved to be very fruitful in terms of random encounters. Late in the afternoon, just before Good Charlotte took the stage, I had the pleasure of seeing my old friend Drew “Beardcore” Ellis. Drew has held some pretty respectable significance in the music industry for a number of years now, and upon our encounter I was able to learn about his current band endeavors as well as his impressive collection of tattoos.

I first met Drew when he was awkwardly playing bass and guitar in a handful of rock bands local to St. Joseph, Missouri. Metal and hardcore fans might recognize Drew from his stint with The Browning between 2012 and 2015. While playing guitar with the electronic inspired metalcore outfit, Drew had the opportunity to explore the world, touring with bands such as Fear Factory, Shadows Fall, and Static-X– all while writing and releasing a full length album titled Hypernova via Earache Records. He left The Browning in 2015 and currently operates STR816 Productions, which brings St. Joseph, Missouri residents the best live shows to offer from national touring acts in the metal and hardcore music scene.

Drew flashed us a few of his favorite tattoos including the cult classic Donnie Darko countdown on his bicep.

Here is a nature themed neck piece that represents his family pride and honors his father and grandfather who raised him in and around rural parts of St. Joseph, Missouri.

Lastly, check out this flash style jar of mayonnaise… because, well, he just really loves mayonnaise. 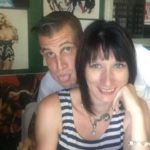