posted by ROCKwell UnScene
Tucked away in a pasture, or so it seems, in Northwest, WI you will find Somerset, the home of Northern Invasion. The 2017 version of this year’s musical Invasion was really a British Invasion. As Lions, Dinosaur Pile Up and the Struts, some of Britain’s brightest brand spanking new (to the U.S.) bands were among those to take the stage on day 1. The Brits might qualify for the ‘traveled-furthest’ award, but the ‘most brutal band of the day’ award goes out to Every Time I Die.

There was no shortage of world renowned bands to feed the crowd’s craving for rock and metal – Sum 41, Godsmack, Citizen Zero, In Flames, Rival Sons, Pierce the Veil, Dorothy, and Bush to name a few. With a lineup like this, you can say that day 1 of Northern Invasion was a face melting, moshing success.

The only thing hotter than the sizzling skin of Wisconsonites was Dorothy. This LA-based band, a newcomer to the music scene, will get you revved up and ready to get your swerve on rock and roll style. I heard a bit of Janis Joplin, LoveBettie, and Lynda Kay. Saying that Dorothy is Sultry does not do her justice. This lady’s pipes are more powerful than a steam locomotive. Sexy not only drips from her sheer stage presence but in her every move. She is backed by one of the most solid bands I have seen take the stage in a very long time.

Pierce the Veil is one of the heaviest bands to emerge from the San Diego music scene. Brothers Vic and Mike Fuentes  birthed Pierce the Veil in 2006. Since then the band has toured the world and are on their 4th album “Misadventures“ I venture to say that this album is the best to date and I am a huge fan of the cut “Texas is Forever”. Stay tuned for our interview with Vic and Mike to hear the story behind this song.

Citizen Zero hails from Rock City itself – Detroit, Michigan. Like Pierce the Veil this band was also formed from brothers – brothers Greg (bass) and John (drums). Citizen Zero caught the attention of Al Sutton, Kid Rock’s recording engineer. With a sound that is in the same vein as Kings of Leon, STP, and Theory of a Deadman it’s no surprise that Citizen Zero has won over the ears and hearts of rock and alternative fans everywhere. Be sure to check out the new music video “Lure and Persuade” and you will see why this band is a fan favorite.

As Lions… I became a fan at first listen, but nothing could prepare me for the live show. As Lions is the full package, Stage presence, sound, technically beyond compare, and in one word – unparalleled.

In Flames brought it once again. I have seen them at least a half a dozen times and every show leaves me with the same opinion of the band: they are incomparable to any other. Much like As Lions, In Flames captivates crowds with their stage presence. I urge you not to take my word for it, but to go to a show and check them out before they head back to Europe in June.

Rival Sons gives the vibes of Jim Morrison and The Doors. The singer sort of channels him the way he moves and loses himself in the moment. With Rival Sons there is no need for a big production because they are the production.
All the bands that took the stage today gave a memorable performances, but I have to say festivals are about more than music. I had the chance to see a family who came to celebrate the mothers day weekend rocking out. In my opinion, a family that rocks together stays together. And why not make it a family day!? With vendors, merch booths, meet and greets, and VIP access, this was a great place to give mom a great weekend.
Stay tuned for more coverage on Northern Invasion 2017.
Northern Invasion 2017: Day 1 Recap was last modified: November 27th, 2017 by ROCKwell UnScene
0 comment
0
Facebook Twitter Google + Pinterest
Previous post
Next post 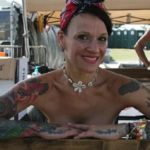