MEGADETH Announce Bassist For Metal Tour Of The Year N. American Co-Headline With LAMB OF GOD. 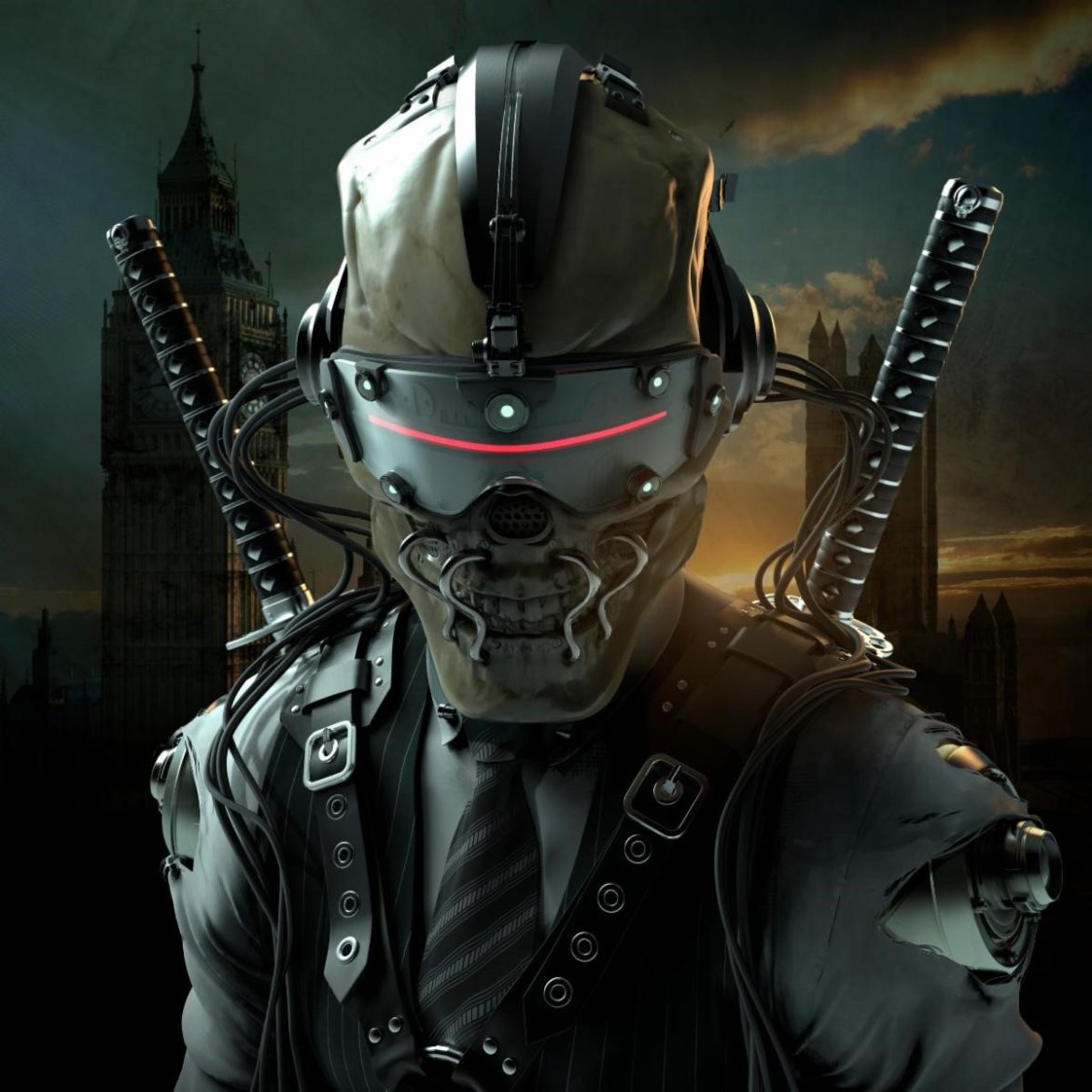 In just 9 days, the Metal Tour Of The Year co-headlined by MEGADETH and LAMB OF GOD will lay waste to cities across North America as the highly anticipated trek finally hits the road. MEGADETH have today announced that joining them to take care of bass duties for this tour will be former MEGADETH member, James LoMenzo.

“I’m happy to announce that former bassist and Megadeth alumni James LoMenzo has graciously stepped in on the Metal Tour of The Year. Tour rehearsals just began, and we cannot wait to start crushing North America.”

“I’m super stoked to be rejoining Megadeth for the upcoming Metal Tour of the Year. There are no better fans than Megadeth fans, I can’t wait to get out there and shred some Megadeth music with you all.”

Rounding out the line-up for this most epic tour are TRIVIUM and HATEBREED, making these THE must see shows of 2021 for metalheads nationwide. Produced by Live Nation, the mammoth, rescheduled tour will now kick off on Friday, August 20th in Austin, TX and hit a further 27 cities before wrapping in Quebec City, QC on Saturday, October 2nd. Tickets and VIP packages for this metal extravaganza are on-sale now from LiveNation.com. With tickets shifting fast and MEGADETH VIP packages almost sold-out, you don’t want to miss this one. This weekend only – get 2 tickets for $39+fees for a select number of shows*** on the Metal Tour of the Year! 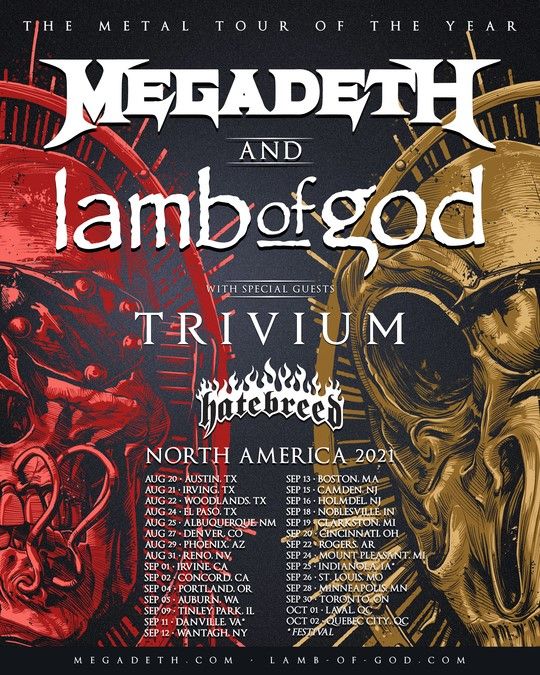 For those in the Nashville area, Dave Mustaine will make a special appearance at Frugal MacDoogal in Nashville on Saturday, August 14th from 3pm – 6pm CST for a special wine tasting affair and bottle signing. For details visit houseofmustaine.com. 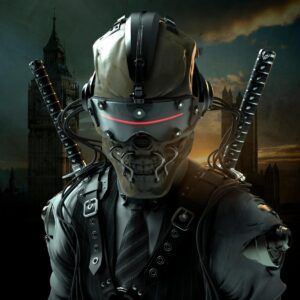 It was over 30 years ago Dave Mustaine founded MEGADETH, in the process pioneering the sound that would become known the world over as thrash metal. And from the very beginning, the band proved to be the most lethal and audacious unit on the heavy music scene, pushing thrash to the limits of musical ferocity and instrumental virtuosity on early efforts like their 1985 debut, Killing Is My Business…And Business Is Good! and 1986’s seminal Peace Sells…But Who’s Buying?. MEGADETH have taken their place as one of metal’s most influential and respected acts—not to mention among its most successful. They have gone on to sell more than 38 million albums worldwide, earning numerous accolades including a 2017 GRAMMY® Award for “Best Metal Performance” for the title track ‘Dystopia,’ 12 GRAMMY® nominations, and scoring five consecutive platinum albums. With sheer determination and a relentless recording and touring schedule, MEGADETH worked their way up from headlining clubs to headlining arenas, festival and stadiums, cementing a legacy that continues to grow and spread throughout the world. MEGADETH are slated to release their 16th studio album later this year. 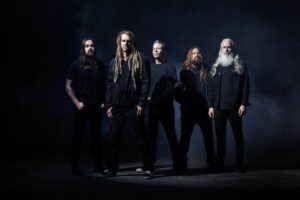 LAMB OF GOD propelled heavy metal into the new millennium two decades ago with the prophetically titled New American Gospel. They followed with 2003’s As the Palaces Burn, which made the Rolling Stone list of the Top 100 Greatest Metal Albums of All Time. Ashes of the Wake, released in 2004, was the first LAMB OF GOD album to be certified gold by the RIAA, as was 2006’s Sacrament, which also made a Top 10 Billboard 200 chart debut. In 2009, LAMB OF GOD released Wrath, their first with Josh Wilbur as producer, and earned the number one album spot on Billboard’s Hard Rock, Rock, and Tastemaker charts, with a number two position on the Billboard 200.  Those number one positions were repeated with 2012’s Resolution, which swung effortlessly between thrash, traditional metal, sludgy doom, with flashes of crust punk swagger and bravado. LAMB OF GOD’s last album, VII: Sturm und Drang (2015) made its debut on the Billboard 200 at number three and finished number 2 in the world charts, reaching Top 5 in five countries and six additional Top 15 positions.  In 2020 LAMB OF GOD released their critically acclaimed self-titled opus, the band’s best work to date, featuring new drummer Art Cruz, LAMB OF GOD is re-energized and unrelenting, ready to lay claim to the metal throne.

Tour Kicks Off In Austin Texas on August 20th 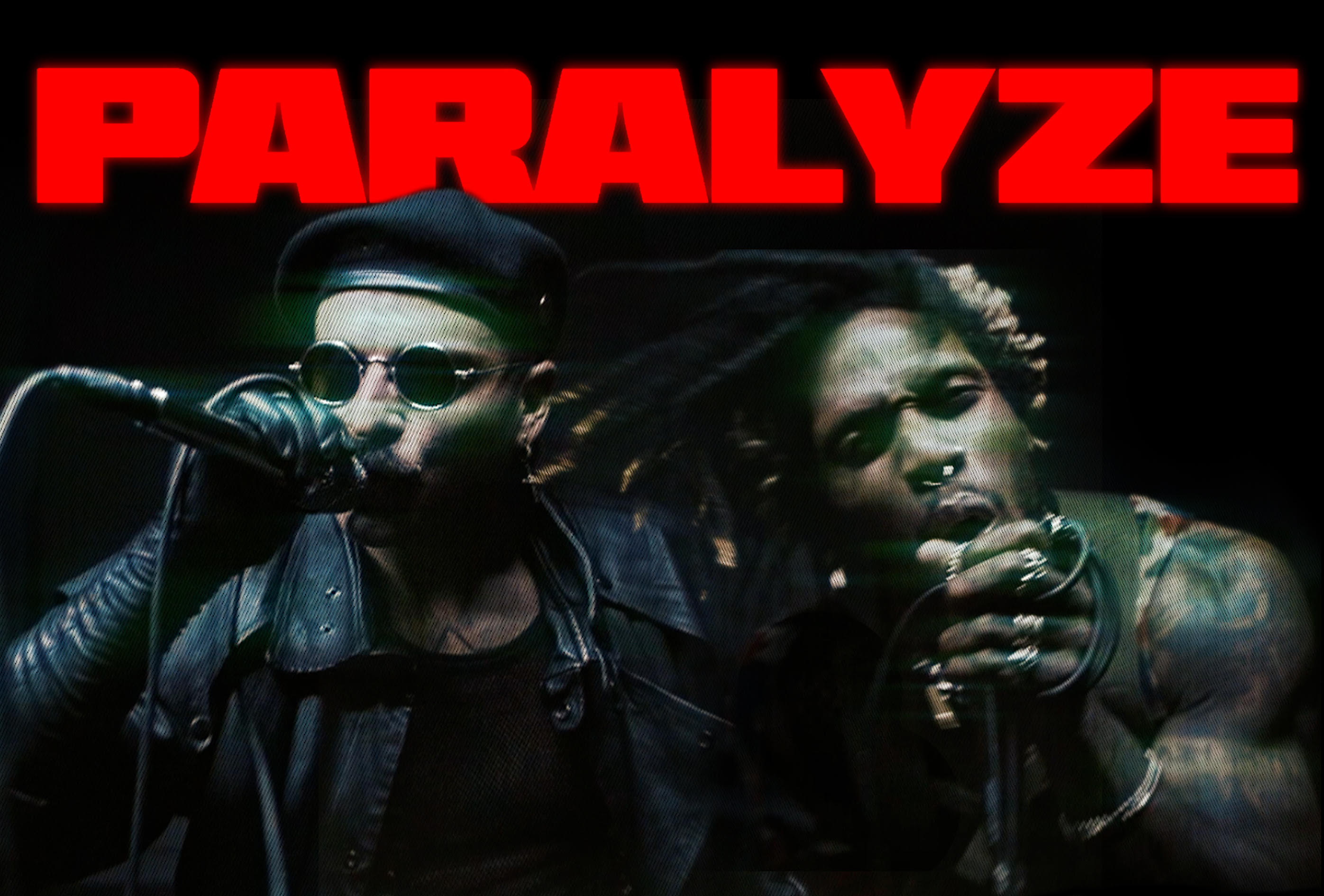 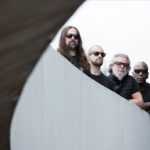