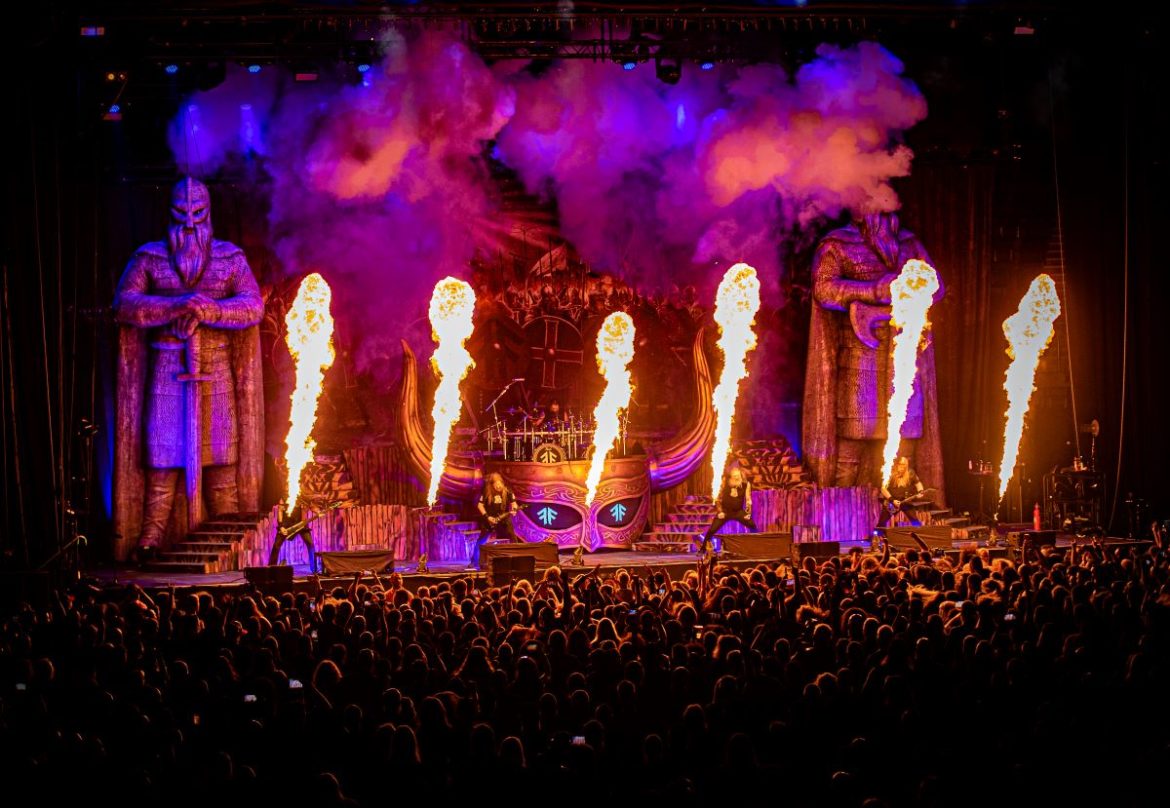 To say I was excited about this line-up is an understatement.  Seeing a few of these ‘packages’ in recent years and they’ve never failed to live up to and surpass expectations.  Entering the venue in the knowledge ‘Her Majesty Queen Elizabeth II‘ had just died, a sobering thought that was put to one side for the duration of this evening’s metal marathon.

The Halo Effect were in the middle of ‘Days Of The Lost’ then went straight into ‘The Needless End.’ The sound was perfect with guitars punching on the riffs with crystal clear melodies. ‘Gateways‘ proved these five death metal legends are made for the big stage.  The rapid and aggressive ‘Feel What I Believe‘ saw singer Mikael Stanne giving it large before the phenomenal ‘In Broken Trust‘ saw Stanne use his stunning clean voice.  We got some old school Swedish death metal with ‘Last Of Our Kind‘ before crushing set closer ‘Shadowminds.’  These five Vikings were the recon party to soften you up before the main warriors, and what a great job they did too.  Looking around the crowd was huge and thoroughly had enjoyed The Halo Effect.

The gentle strains of Iron Maiden’s ‘Run To The Hills‘ get everyone ready for a real Viking invasion.  Amon Amarth were hidden behind a screen, then in a heartbeat the cloth dropped as they tore into ‘Guardians Of Asgaard‘ with so much pyro my eyebrows got singed from thirty feet away.  The stage was adorned with twenty feet tall Vikings standing proudly at the sides only to be deflated later, turning into a boat then a large angry serpent. ‘Raven’s Flight‘ brought some pure melodic death, superb twin leads from Johan Soderberg and Olavi Mikkonen. ‘The Great Heathen Army‘ sounded immense, running into ‘Deceiver Of The Gods‘ where frontman Johan Hegg being joined by a horned, green-eyed demon soon being dispatched back to whatever hell it came from. ‘Heidrun‘ had a folky intro before developing into a head banging chug-fest, apparently this was the songs debut, I doubt they will be dropping this from the setlist anytime soon. The stage then became a Viking long boat and as a result we got both ‘The Pursuit of Vikings‘ and ‘The Way Of Vikings‘ which included Hegg doing battle with a chain mail clad defender, all to no avail as Hegg beating the hapless chap.  Next up ‘Put Your Back Into The Oar‘ being aired for the first time, then classics all the way ‘Fresh Kill,’ ‘Shield Wall,’ ‘Raise Your Horns‘ which involved much drinking then the superb ‘Twilight Of The Thunder God‘ closed the set. The crowd were drenched and looked absolutely spent, but this lot are a hardy bunch replacing their lost fluids ready for the battering they were expecting.

Machine Head ran on stage, Robb Flynn shouted – “This is a fast one” ripping into ‘Become The Firestorm.’ What an opener, fast, aggressive and brutal which was pretty much the theme of the set.  Flynn called for a circle pit on ‘Imperium‘ and the crowd duly obliged. ‘Now We Die‘ upping the brutality if that was possible with drummer Matt Alston beating his kit.  Flynn now wanted the biggest circle pit for ‘No Gods No Masters‘ and it literally went to both sides of the arena. Witnessing this astonishing act, affirming Robb Flynn is a master front man.  He had the crowd in the palm of his hand from the off, but credit too to guitarist Vogg, the guy can shred to the max and also credit to Bassman and singer Jared MacEachern not only did he provide a huge bottom end, but his harmonies with Flynn were superb. Then came the apocalyptic ‘I Am Hell (Sonata In C#)‘ followed by ‘Aesthetics Of Hate‘ before the crushing ‘Darkness Within‘ then ‘From This Day.’  Final numbers being the obligatory ‘Davidian‘ – a stone cold classic in my opinion – and the might of ‘Halo‘ again with MacEachern helping with the vocals. 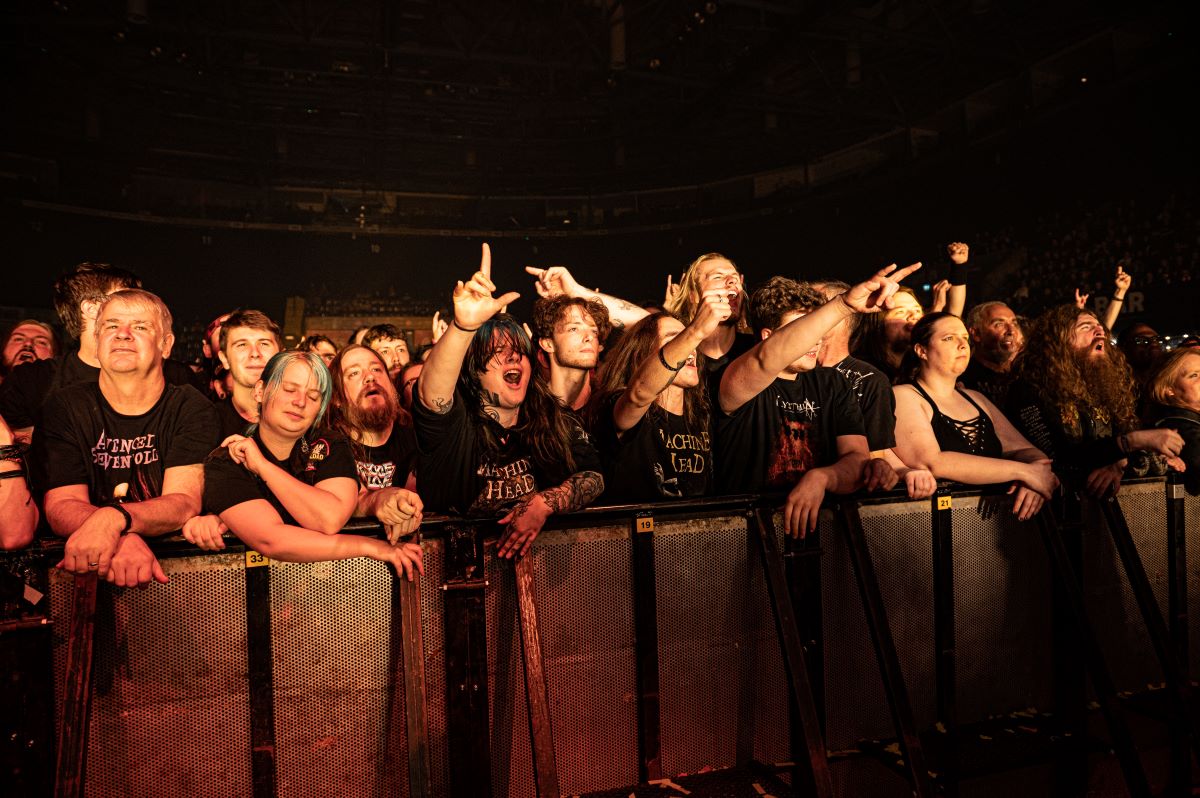 The evening started with five Death Metal Legends in a new band that has produced a storming debut album, then came the Viking invaders who pillaged with an intense ease before the Yanks teared a new one through Nottingham, obliterating anything which was left. Whoever put this bill together deserves a medal because it was an absolute triumph. 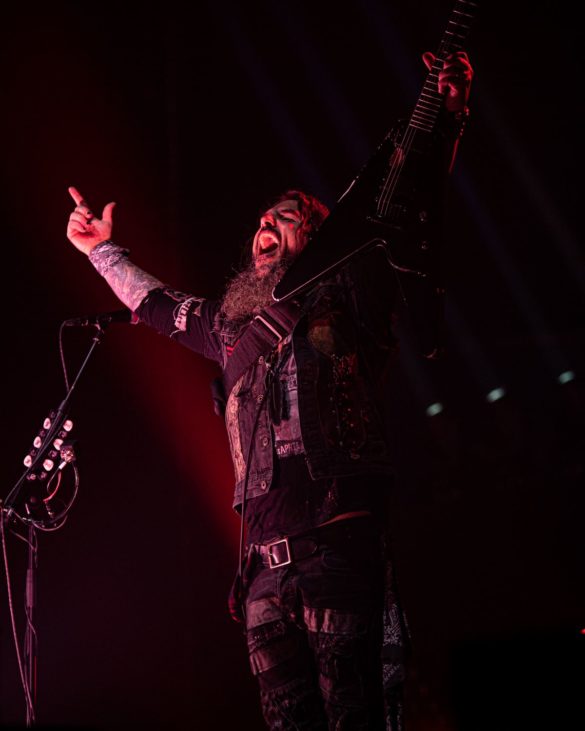 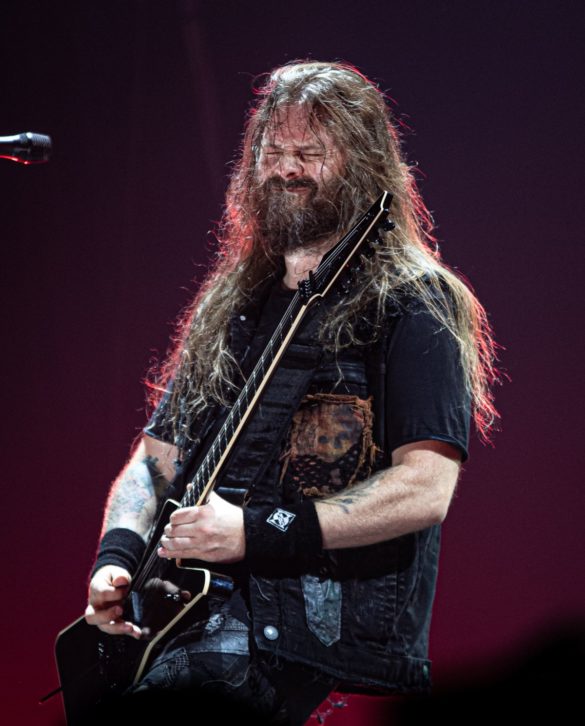 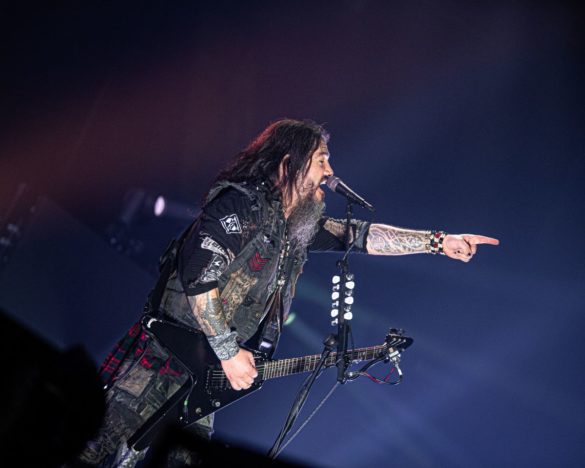 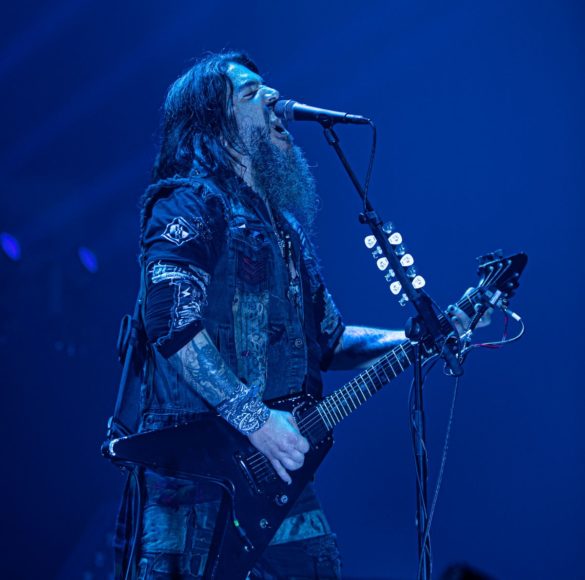 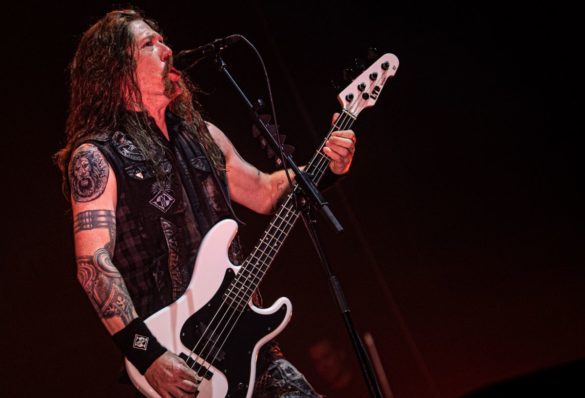 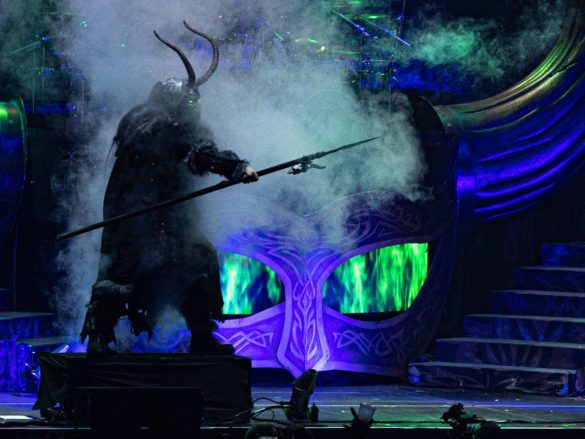 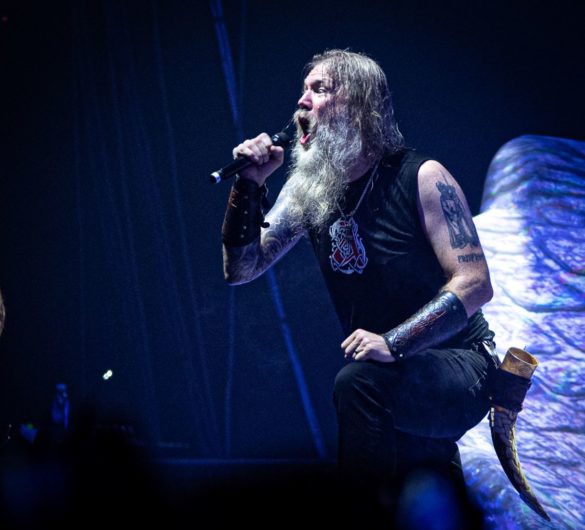 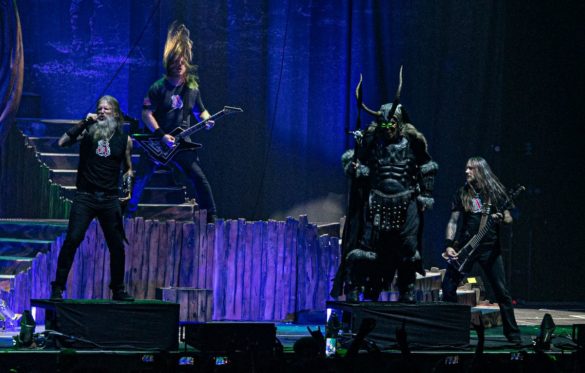 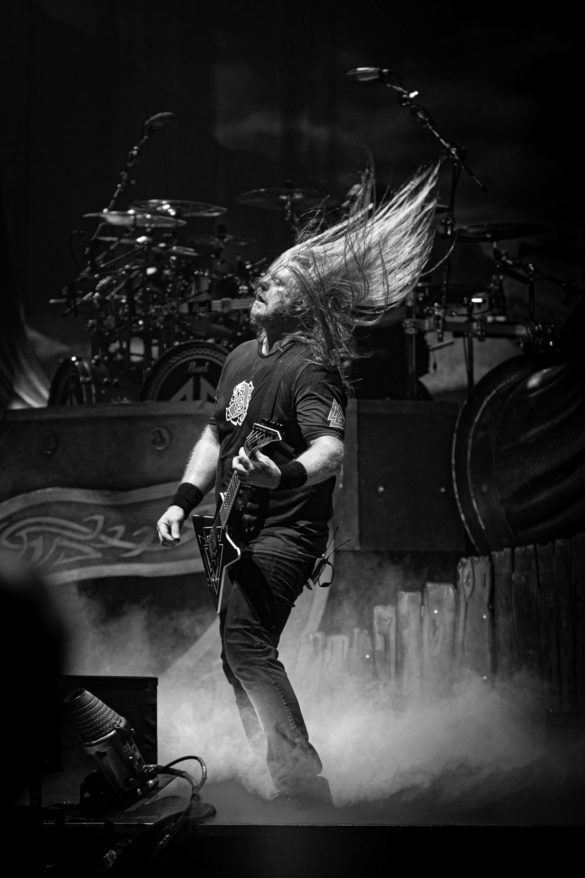 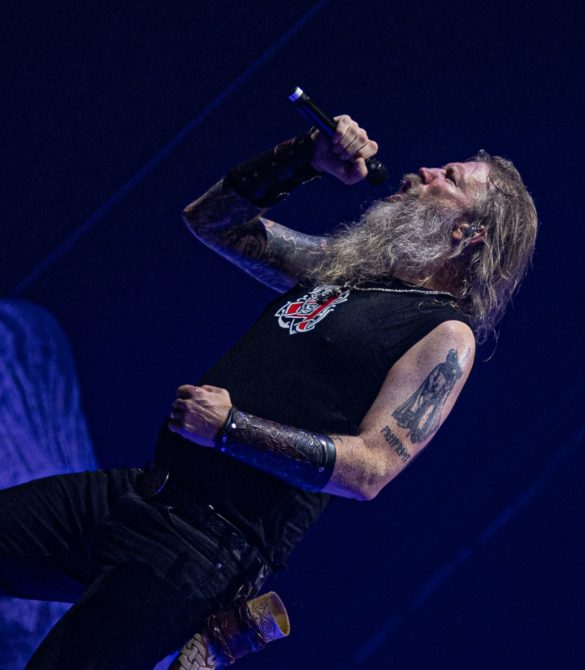 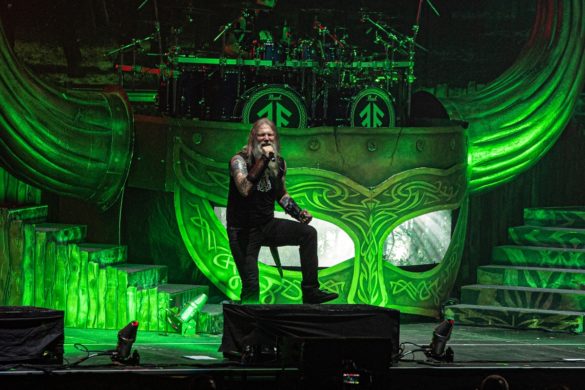 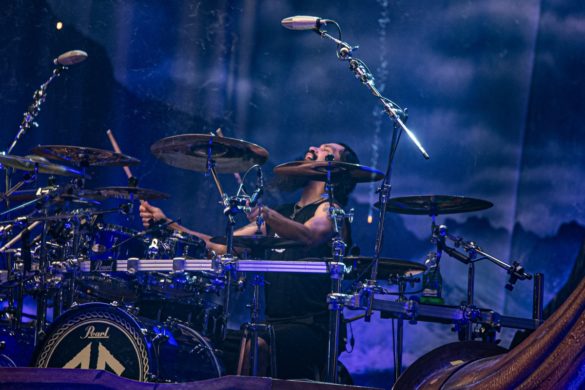 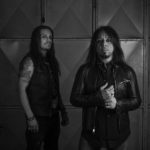