With the usual late summer storms, high humidity, and sweltering heat oppressing concert goers, the “Feed the Machine” tour featuring Nickelback, with Daughtry, and Shaman’s Harvest rolled into Tampa. With Nickelback’s “Feed the Machine” debuting June 16th and Shaman’s Harvest coming out with “Red Hands Black Deeds” on July 28th, there were new songs from both artists abound.

Opening up with the title track from their new album, Shaman’s Harvest welcomed fans into the Amphitheatre. Filled with a mixture of sultry blues riffs, shredding hard rock chops, and a look that can be best described as ‘eclectic’ if you have not heard this band before, you would not know what to expect. As the crowd built up, their response to the band became increasingly louder. Looking around the crowd, their cover of Michael Jackson’s “Dirty Diana” resonated with many fans as a refreshing take on a classic many fans grew up with. With a diverse sampling of new and old tunes and 10 song set, they gave those fortunate enough to catch them got a great example of what they are about. For a sun setting opening slot, they definitely had Mother Nature setting a great scene for them.

With Daughtry occupying the middle slot, and a relatively full house as he took the stage, the crowd was largely on their feet and ready to sing along with Daughtry. With hits like “Waiting for Superman”, “Feels like Tonight”, “It’s Not Over”, and a piano only version of Metallica’s “Nothing Else Matters” in the middle, this was one unique setlist. While this cover was slightly reminiscent of their “S&M” version of the song, it was uniquely different. This cover may not be for everyone but it certainly triggered one of the loudest reactions for him. As the set ended, and darkness descended, the amphitheatre filled closer to capacity as the headliner Nickelback was ready to hit the stage.

A career spanning 22 years, 50 million albums sold, and nine albums under their belt, Nickelback has become a rather well-oiled machine. As lead singer Chad Kroeger showcased throughout the show, Jagermeister makes up the majority of this oil. With the smell of “dank marijuana smoke” filling the arena (as pointed out by Kroeger), this crowd was ready to rock out. With no shortage of new and hit songs to showcase, the 22 song set featured “Photograph” a version of “Nickelback-oke” with a male and female fan pulled u on stage to sing along to “Rockstar”, “Something in Your Mouth” and their first hit single “How You Remind Me”. These hits were spread out evenly over the set, leaving no fan unsatisfied. Their stage show is something that cannot be understated. Lights, smoke (which at times even by Kroeger’s admittance was a bit much), and an LED orb behind them that was highly utilized, they showed how effects besides the usual lights can enhance a concert performance without detracting from what the fans really pay for; a special connection with the band.

Overall, love them or hate them, Nickelback puts on one hell of a show. With their tour mates Shaman’s Harvest and Daughtry steadily ramping up the emotions and excitement in the air, Nickelback hits the stage with the whole crowd in the palm of their hand. Needless to say, they don’t crush the crowd with a mediocre set. Rather they caress, appreciate, and respect their fans for coming out. If you are a fan of any of these three groups, this tour is not to be missed. 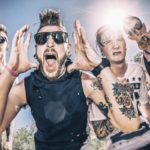