Interview: Belle and the Dragon Discuss Tattoos, Faith, Music, and The Apocrypha 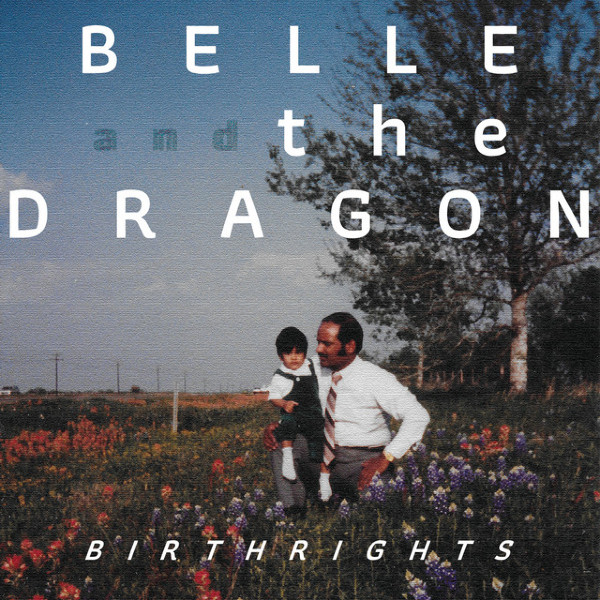 Belle and the Dragon recently released their debut album, Birthrights, an examination of beliefs and traditions inherited at birth.

Formed by Flyleaf guitarist Sameer Bhattacharya, the other members of the band include Pat Seals (bass), Noah “Wuv” Bernardo, and Dave Hidek (programming, keys). Essentially, Belle and the Dragon is a combination of former Flyleaf and P.O.D. members. Yet their sound is not what one would expect, encompassing alternative flavors.

Drummer Wuv and bassist Pat both have beaucoup ink, with significant personal connotations.

Tattoo sat down with vocalist/guitarist Sameer to find out more about the band, their influences, gear, and how they got together.

What’s the band’s musical backstory? And how did you come to get together?

Pat and I grew up playing with Flyleaf and met Wuv when Flyleaf went on tour with Staind and P.O.D. for the 2005 Fall Brawl Tour. While Flyleaf has been on hiatus, I toured with P.O.D. for a couple of years playing keyboards and doing support vocals, so I got to know the guys pretty well. When I had the opportunity to track BIRTHRIGHTS for Belle And The Dragon, I knew exactly who I wanted.

Who is in the band (names) and what instruments do they play? Who is the lead vocalist?

What are the dynamics of the band like? Does the band run like a democracy, everybody has a vote and majority rules? Or is it a benevolent dictatorship? Or something in between?

I think it lives somewhere in between. I write all of the songs, but I put people around me who I trust to make those songs better than I ever could on my own. It’s important to surround myself with artists who teach me how to see and hear things differently.

What are you listening to right now?

Podcasts. Haha. No, there is a band from Tijuana called Junipero who I’m digging. They are synth-pop and it’s cool. Mazzy Star shoegaze goodness. Thom Yorke’s Anima has been in the rotation lately.

This list is always changing because my memory is horrible and I get those “oh man! I forgot about that until just now!” Radiohead is at the top of the list along with Tom Morello, Mike Einziger, Björk, Sigur Rós, Sufjan Stevens, Jimmy Eat World, David Bazan, and the list goes on. A lot of grunge and nineties alternative I’m sure has a subliminal (perhaps obvious to everyone but me) influence on me. I am an Oasis fan, mostly for the fistfights.

What kind of guitar do you play?  And why?

I play PRS guitars. When I was in high school I had a Guitar World clipping of Mike Einziger of Incubus holding a PRS Sprucetop Hollowbody. That was my dream guitar, and I’m fortunate that the kind folks at PRS helped make that dream a reality.

What kind of drums and cymbals does your drummer play? 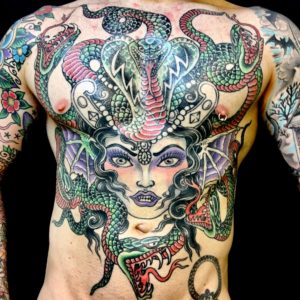 What’s the story behind the band’s name – Belle and the Dragon?

The story comes from the book of Daniel chapter 14 in the Apocrypha. The prophet Daniel debunks the Babylonian gods Bel and a giant serpent they called a dragon. He does this using practical means. No supernatural intervention at all. It was the most scientific moment I had read in any Bible or extracanonical stories. Daniel identified a problem, made a hypothesis, conducted his experiment, and made his observations. And if he could repeat these steps and reliably get the same result over and over again. I’m not a scientist, but that logic makes sense in my brain, so I cling to that story.

What inspired your album, Birthrights?

I addressed some of the questions I had about faith, life, and death that I feel like aren’t talked about much in the community that cultivated my worldviews.

What is your songwriting process?  Does the music come first and then the lyrics?

It’s always a little different. Sometimes it’s a melody that comes first, or a lyrical phrase, or a guitar riff. Sometimes if I get really stuck I will take a song I love, use that melody but change the words, then change the chord progression, then adjust the melody and by the time I’m done it’s a new song. But that method is arduous and can sometimes come out stale. I typically go with my gut and if it makes me feel something, that’s a good thing. 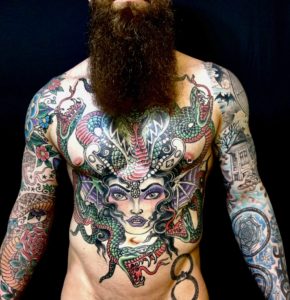 I know your drummer Wuv has beaucoup tattoos. Does anyone else in the band have ink? If so, what significance do they carry?

Wuv and Pat both have a ton of ink.

Wuv says his most significant tattoos are his kids’ names. His kids are everything to him. I spent some time with his son Noah in Japan and Korea, when I was playing keys for P.O.D. We had a lot of fun and it was cool to see the dynamic between them both. It is obvious how much Wuv loves his kids.

Pat explains, “My chest piece of Medusa’s head is important to me because it is the story of how a beautiful, innocent person was turned into a horrific, deadly gorgon. Neptune raped Medusa while she was worshipping in the temple of Minerva/Athena, who then turned the maiden into a monster for ‘desecrating her temple.’ The whole story explains the pattern of society’s general behavior: the powerful exploit the vulnerable and then demonize them. When I remember how much this tattoo hurt, on my ribs, sternum, over my heart, I remember how dangerous it is to trust any human institution, and how vital it is to become dangerous to the structure of these institutions.”

Will you be touring in the near future?  If so, where?

No tours booked right now due to the global pandemic, but we will definitely get on the road when it’s safe. 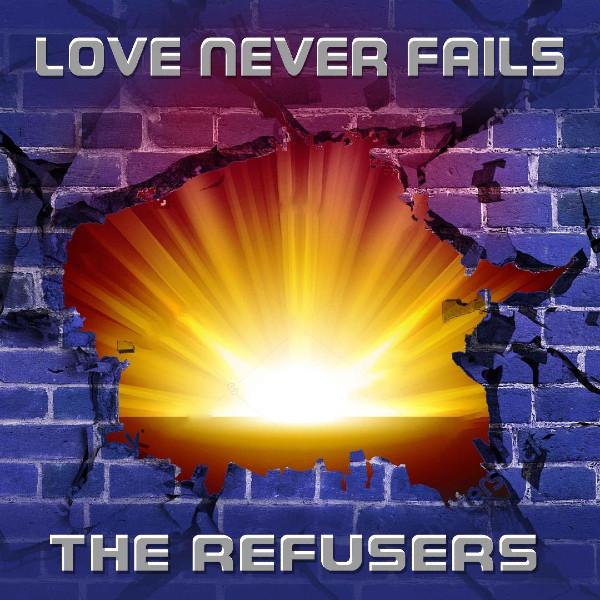 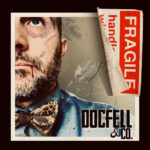