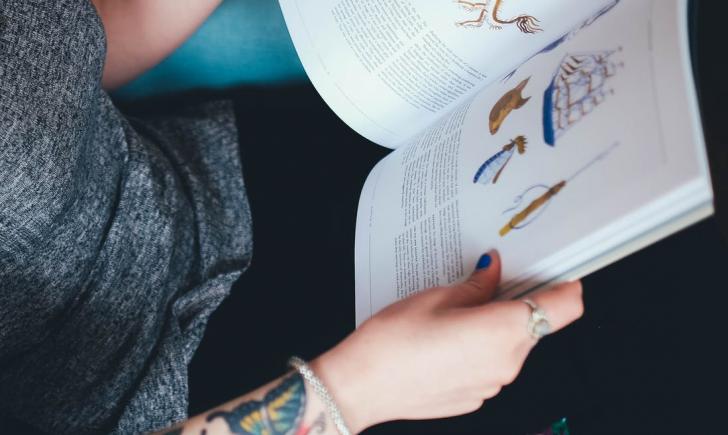 Tattoos have been prevalent in society for as long as written history has documented. Longer, in fact. We know for sure that tattoos were being applied to human skin as far back as 5,000 years ago—long before the first written document. Throughout history, indelible body markings have captured and fascinated the public regardless of their current status or popularity. From the indigenous natives covered in hand-poked art or the mysterious tattooed women of the traveling circuses in the Victorian era, tattoos have thrilled and enthralled captive fans. It’s no surprise that they should be worked into works of literature, preserved in the printed word for eons of time.

While tattooing has ebbed and waned in popularity, with some cultures enveloping it and others banning it, one thing has remained constant—tattoos and literature have been hand in hand since the inception of the written word.

Written by American-born author Herman Melville, Moby Dick was published in 1851 during the period of the classified American Renaissance. The book has long been deemed an American classic, appearing in multiple movie references, bookshops, and other literary works over the 166 years since its publication. The period in which the book is set is during the reestablishment of the tattoo culture, with sailors donning mass quantities of traditional Polynesian work they picked up while at sea.

In the book, the author gives a detailed description of a man wearing ink upon his face and body. The character is a Polynesian harpooner who claims to have a complete theory of the heavens and the earth scripted into his tattoos, however, no one can decipher them.

-Something Wicked This Way Comes

This 1962 novel created one of the cruelest, most wicked characters of all time. The book, which follows a dark and twisted carnival, is filled with creative, quirky, malevolent characters, but it is Mr. Dark which stands out the most. This warped individual is depicted as being covered in tattoos so captivating that they can entrance an audience, but these tattoos hold a horrifying truth—each image is the face of someone who has befallen Mr. Dark’s magnetism and become his unwitting servant.

This YA series penned by author Veronica Roth depicts a tattooed hero, giving a new spin to the literary world’s depiction of body art. A character aptly named Four is shown wearing ink, but unlike the other characters in the novel, his is not a single image. Four’s tattoos span across his entire back area, from shoulders to waist. Four’s tattoos are meant to display his hopes to become more than just his “faction,” but that he hopes for a future in which individuals are not divided into groups but instead demonstrate unity.

-A Series of Unfortunate Events

Another YA series, A Series of Unfortunate Events, written by Lemony Snicket, features a very prominent tattoo. Members of the infamous VFD group (which takes on a different meaning through each novel) are marked with the same tattoo. The main villain of the series wears this tattoo, as well–a small eye on the inside of his left ankle.

This thriller, written by Thomas Harris, features a notorious serial killer who claims to be possessed by a spirit which he refers to as The Dragon. The nefarious killer has a large red dragon tattooed across the whole of his back.

Another novel by famed author Ray Bradbury, The Illustrated Man is a uniquely poised science fiction tale. In this novel, the audience is introduced to a surreptitious traveling man who is covered in tattoos. Unlike normal tattoos, however, each of these designs come to life to literally illustrate the story.

-The Stars My Destination

This 1956 science fiction novel features a man, Gully Foyle, who wears a mask of a tiger across his face. This design was inked upon his skin by a cult that plucks him from space. Although he attempts to remove the tattoo, most unsuccessfully, the ink becomes a symbol for who Gully is as a person—losing his humanity to the animal nature buried inside of him.

Another classic, penned by the famous Sir Arthur Conan Doyle, uses tattoos to deduce the travels of a man who appears at Sherlock Holmes’ flat. Set during the Victorian era, Holmes uses a small wrist tattoo of a fish to explain how he knew the man had recently traveled to China.

Written by Val McDermid, this 2006 psychological thriller features tattoos as a focal point of an investigation. A highly-preserved corpse is discovered in the bog of the Lake District, decorated with multiple tattoos. The tattoos lead detectives on a wild chase across history as they point to an 18th century mutiny that took place upon the HMS Bounty.