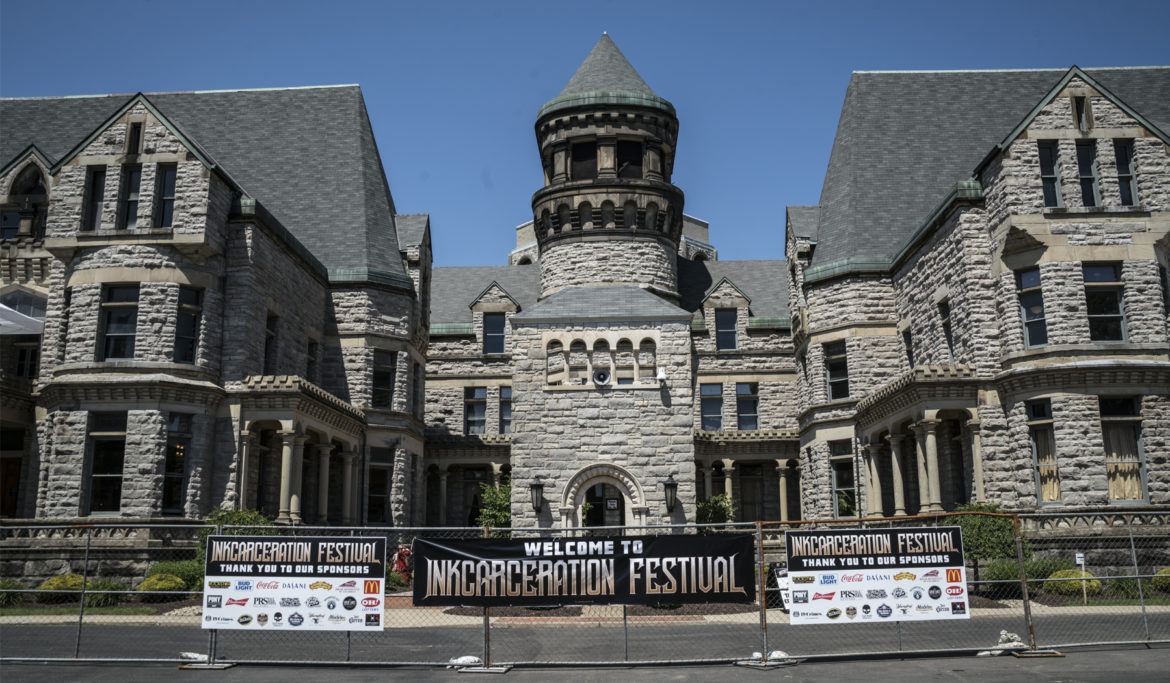 Tucked away in “Middle Earth”, otherwise known as Mansfield, Ohio, is the historic and infamous film location for the movie ‘Shawshank Redemption’ (and recently several ghost hunting shows).  On July 13th (Friday the 13th!), 14th, & 15th, it was also home to some of the biggest names in  Music, tattooing, and the HellzaPoppin freak show.

Hellzapoppin at Inkcarceration 2018The engergy from the fans and bands was one of awe, excitement, and could only be fueled by the festival fever that many music fans possess. The 3 day weekend music line up included DevilDriver (look for our interview with lead vocalist Dez Fafara coming soon),

Of Mice & Men (look for our interview with Valentino coming soon),

Mischievous Mel with Valentino from Of Mice & Men

Rise Against (who headlined Friday the 13th),

Rise Against at Inkcarceration

Akadia (Guy – bassist for Akadia pictured on the right, shortly after getting his “Steam Punk Skeleton” cover up tattoo by artist Wave Judd on left),

A Day To Remember,

A Day to Remember performing at Inkcarceration 2018

Hatebreed (with Shawshank serving as part of their backdrop),

Our Lady Of Peace (look for our interview coming soon),

Mischievous Mel and members of Our Lady Peace at Inkcarceration 2018

Corrosion of Conformity at Inkcarceration

Soil (with the prison serving as the backdrop),,

Bad Omens (who we saw at both Rock USA in Oshkosh, WI and Inkcarceration on consecutive days),

and Black Label Society (who headlined Sunday night July 15th) were among the bands that took the stage at Inkcarceration.

Now set that soundtrack to the visual of one of the most impressive and historic prisons around today. Tour the cells,

and as you walk through you can feel the presence of the ghosts of past.

If you look out the back windows you can see (but not photograph or video) the felons in the yard of the active prison located directly behind the former. It is spooky beyond words.

For the fans that came out to get inked, they were fortunate to get a prison tattoo done by a pro. That is right – inside the prison, artists set up and went to inking all those who were ready for one of the most surreal ink experiences ever. Don’t worry – there was no pens, toilet water, paperclips, or rubber bands used to tattoo you. These prison tattoos were done by masters of the craft like Wave Judd who took a quick 2 hours out of his day to tattoo bass player Guy from Akadia. You can see footage of that at tattoo.com taken by Rockwell Anderson and Mischievous Mel.  Other artists included Caleb Neff (brother of Ryan Neff, bassist for Miss May I) whose badass work earned him a first-place trophy and 3rd place plaque.

Inkcarceration is a must from top to bottom. From the ghostly and macabre to the epic music and tattoo artists, this festival has a bit of something for all of us.  Personally, we can’t wait for Inkcarceration 2019!!! 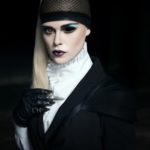