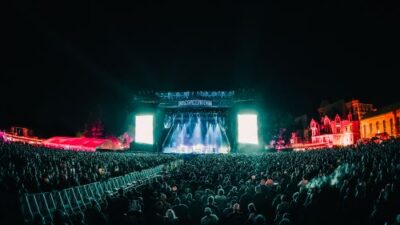 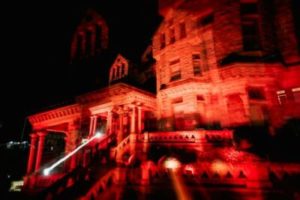 What started in 2015 as a joint venture between one local promoter and a historic prison, has evolved into much more in just 6 years. Surviving a major breakup (partnership dissolving in 2018), a name change (previously ‘Ink In The Clink’), then cancelled in 2020 due to a global pandemic (Covid-19) this festival has seen it all. Now partnered with festival masterminds Danny Wimmer Presents (DWP), INKcarceration has been reborn bigger and better than ever.The Venue – Well known for it’s backdrop in multiple movies and shows, ‘The Shawshank Redemption,’ being the largest and most well-known, the Ohio State Reformatory in Mansfield, Ohio is a sight to see on it’s own on any given day of the week. Since it’s closure in 1990, the historic prison has been home to tours and filming, with a festival being added to mix in 2015. 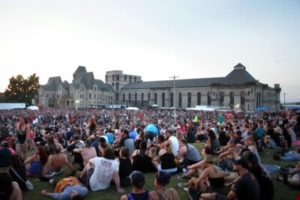 The early years, saw two stages, the main stage in the grassy area to the right of the main drive to the main doors, and the second to the right of the front entrance to the prison. With tattoo artists and food truck city strategically placed in specific areas to maximize space on the grounds available.For 2021, DWP added a third stage in the food truck area, and relocated the second stage from beside the prison to an area usually used for tourist parking. Adding more space to the festival, allowed for more attendance, and a better layout in my opinion.For people who needed a break from the show, the prison offers both a tour, and ‘Escape from Blood Prison’ which is a haunted house based inside the walls of the Ohio State reformatory.

The Crowd – Being one of the first major festivals in the mid-west, fans from all over converged on this small town, almost doubling it’s population for the weekend. With a record-setting attendance of 75,000 people over 3 days, DWP solidified yet again that rock and metal fans worldwide will show if given the chance to enjoy live music and amazing bands.Friday – With a stellar lineup announced INKcarceration had a mix of genres as usual to keep all entertained. 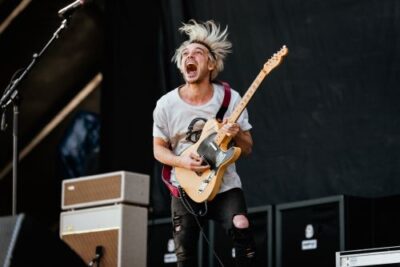 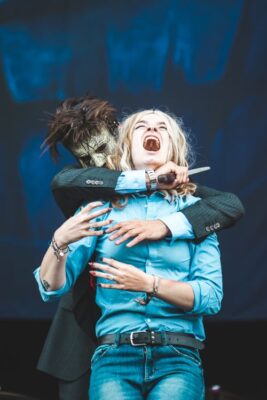 Badflower lead singer Josh Katz was having vocal issues, and did NOT want to cancel, so the crowd were asked to lend their voices to the performance. Which, for an artist is amazing, feeling the emotion their songs give to their fans. For anyone who hasn’t seen the theatrical spectacle that is Ice Nine Kills, put it on your list of things to witness. This Boston based horror-inspired band carry amazing stage presence, bringing characters like Jason, Freddy and Jigsaw back to life. Closing out the opening night was Iowa juggernaut Slipknot, which brought their massive following (known as maggots) out in waves. It’s always fun to see Slipknot playing at a festival because you’ll always find their following showing full support, wearing masks and jumpsuits (which was pretty fitting for a festival at a prison) literally all day, even in 100-degree weather. Their dedication is unwavering! 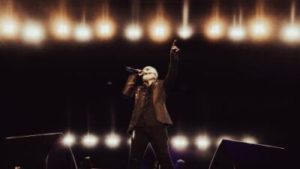 Seeing how DWP came onboard this year, and started putting their expertise to the test was both amazing and frustrating. Saturday Waking up late from a long night exiting the parking lot, things moved slow for our group of friends. Usually tailgating in a parking lot at sunrise, 9am seemed to come too soon, and slow progress was made back down to the orange lot. A good mix of bands today included September Mourning, Bad Omens, Crown The Empire, Pop Evil, and my personal favorite party animals A Day To Remember. 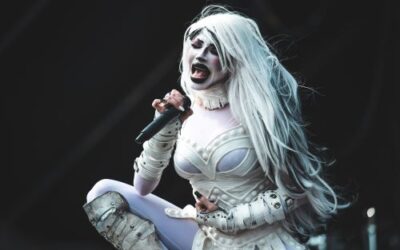 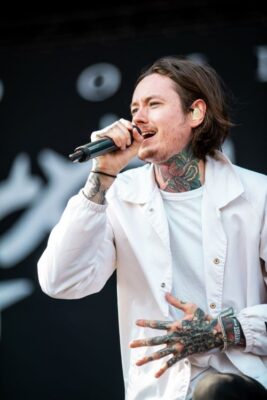 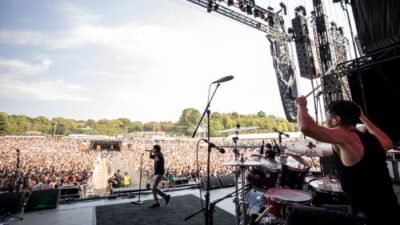 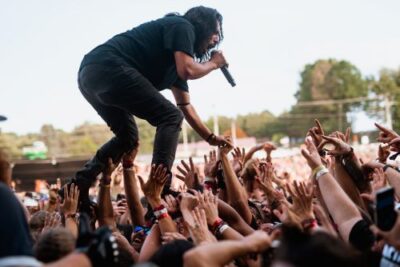 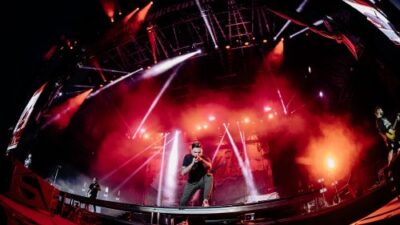 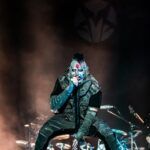 In what was a HUGE announcement by DWP, Mudvayne was chosen to headline the Saturday night with them returning to the stage for the first time in over 12 years. The anticipation waiting for them to begin was intense, with everyone wanting to hear their favorite songs. The band sounded amazing, just like we always knew, and remembered, but Chad’s voice seemed off. Now, in retrospect, I couldn’t imagine trying to hit a vocal range after more than 12 years. I would presume I wouldn’t sound ANYTHING like what I did 10 years ago either. Mudvayne still was the reason most people wanted to be there, and stayed until the end.Sunday With the parking issue under control Sunday morning came easier, and a bit earlier. Starting the day for us was Stitched Up Heart, Wage War, and The Devil Wears Prada. By far, the most excitement for the day (or on any lineup they’re on) was Fever 333. In what lead singer Jason Butler likes to call “demonstrations,” you really have no idea what to expect… except total and utter chaos. Where Jason is, insanity is close behind. Using the stage, crowd, and everything in his grasp, he is one lead singer that puts everything into a performance EVERY time, and never leaves you wondering… did he hold anything back. 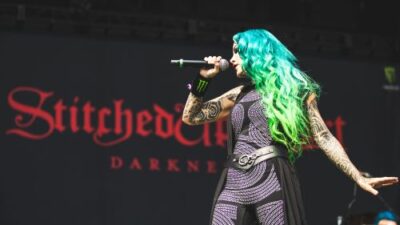 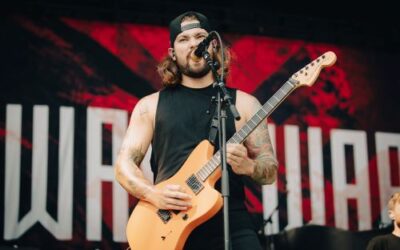 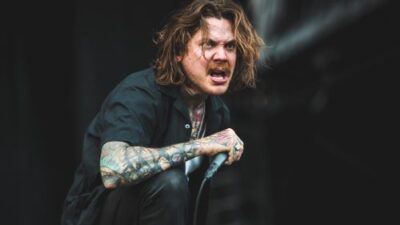 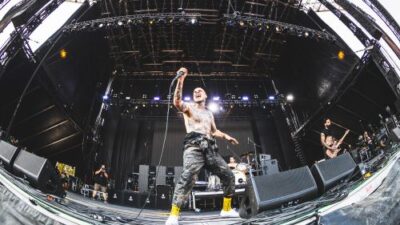 Motionless in White, and Beartooth put on amazing sets, and got the crowd going. While Halestorm did what they always do… which is party! Lzzy and the boys always put on a wonderful show, and it was no different tonight. 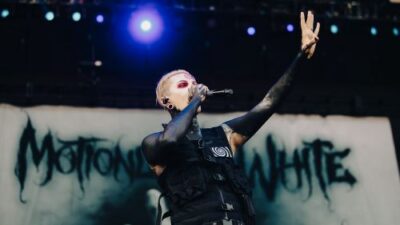 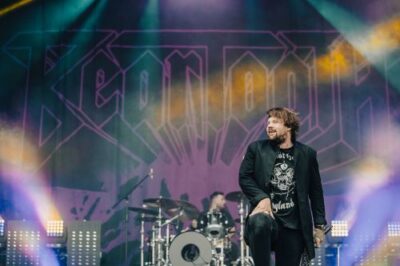 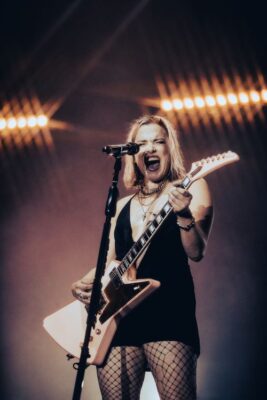 Closing out three nights of amazing music was none other than Rob Zombie. Another person that always has amazing imagery on stage, Rob Zombie was a perfect choice on this Sunday evening. Playing for close to 90 minutes, it was a good set to end a great weekend of live music. 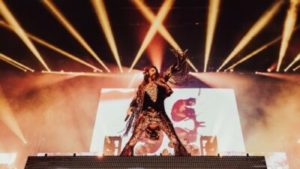 For most of us, INKcarceration was the first live music in over a year and a half, and it was worth the wait. Thoughts – With parking being the largest issue on Friday night, notes were taken by the powers that be and issues were addressed as they arose all weekend. Taking things in stride, DWP’s CEO Danny Hayes, took to his Facebook group, in which he regularly posts and interacts with fans, and addressed any and all issues that arose. From wristband issues, to ADA, to parking, he acknowledged the issue, and kept us informed.Throughout the weekend some people wished they laid out the grounds a bit differently this year, with side by stages (like at Louder Than Life) while others wanted more food and beverage. I think all things considered, notes were taken, feedback will be gladly received and we will see a new and improved INKcarceration for 2022.Speaking of INKcarceration 2022, the dates have been announced, and for those who HATED the idea of it being in September, don’t worry. It has been put back to it’s regular dates of July 15-17, 2022.Tickets are available now in advance here with general admission starting at $165 and VIP starting at $399. 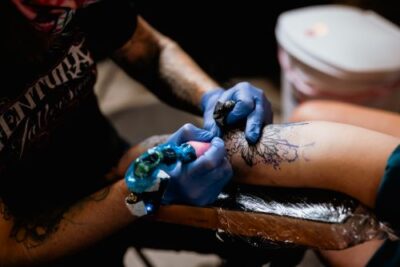 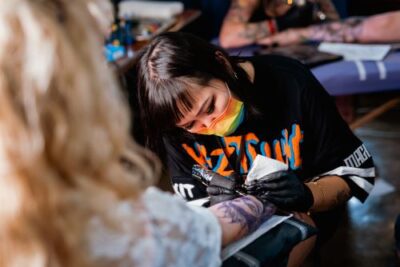 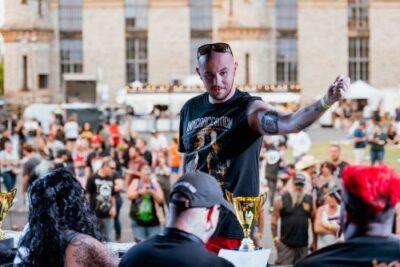 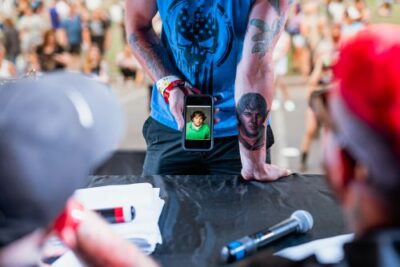 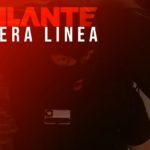