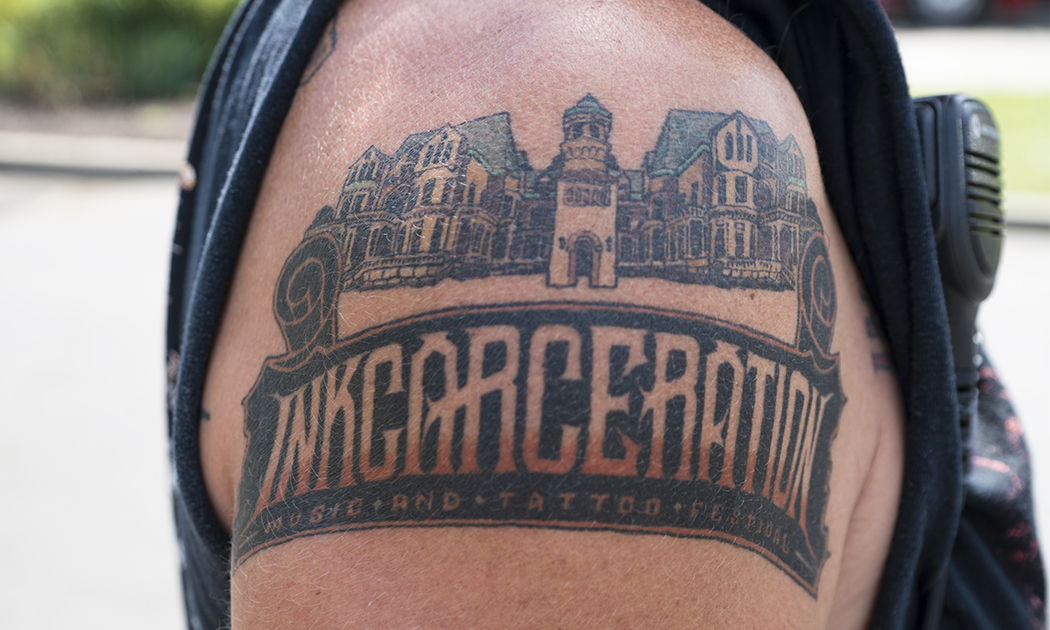 Coming into year 2 of INKCARCERATION, we were told ticket sales were 3x more than they were in 2018, and halfway through day 1 of the 3-day festival, it was obvious to everyone in attendance that 2019 was a sell-out.

I want to share with you why this is a MUST ATTEND destination music festival for any festival fan. Meet Mike Galbraith, aka Dude.

He is the brains and brawn behind INKCARCERATION. When we had the chance to talk with Dude on our way into the festival, his excitement was bigger than his biceps, and that is saying a lot. He shared his INKCARCERATION ink with us, done by the one and only Wave Judd who captured the backdrop of “The Shawshank Redemption” prison and festival logo spot on (as seen on the headline photo).

If you attended last year you know that this is a true one-of-a-kind, historic, and iconic venue. Take a look with me of what started as a reformatory school for boys, morphed into a prison for adults, housed the families of key prison officials including the Warden, incorporated a beautiful chapel within the prison walls, and finally became the setting for the movie “The Shawshank Redemption”.

This year’s sold-out crowd must have gotten the message. I do have to give a shout out to the producers and production crew of the festival for some changes that made the festival easier to navigate.  Inside the prison fans could have some Halloween in July and take part in “Blood Prison”, or if so choosing a self-guided tour. Others could get a professional prison tattoo done by masters inkers setting up shop inside the prison.

So how was it different? There were directions for the crowd to walk so there was no bottle-necking in the hallways and clear entrance and exits. That was a huge bonus. This made it possible to enjoy the prison at your own pace and not hinder other fans on their walkabout adventure of Shawshank.

INKCARCERATION hosted 2 stages – the same as last year. The beauty of having just 2 stages is the timing of the bands – there were no overlaps. You got to see a full set of a band without having to leave early or miss some of the bands you wanted to see… Huge Bonus! Not only that, the proximity of the stages made it very accommodating to all fans. In the mid-July Ohio heat and humidity, this was a small gift from heaven to not have to run miles to get from spot to spot.

For those that needed some brews and grub, there was “Food Truck City & Bar”, in a new location this year to allow more fans to see bands playing on both stages.

Not all the food and drinks were inside “Food Truck City”, such as Silver City Mugs, next to the main stage.

The fans looking for merch and vendors were fortunate to have them all set up in the same area as well. This allowed for fans to get band merch and other festival fares in a dedicated shopping area.

Among the vendors was Ronz World Guitars.

Ron has hands of magic, customizing guitars with wicked paint jobs done by hand. His booth is one you have to stop at if you are into collecting or just looking at the most beautiful artwork painted on already beautiful guitars. He has guitars from many festivals that are signed by bands! Yes, you heard that right – you can get a custom painted signed guitar that is 100% unique.

If you are a gambler, you can take your chances in his raffle to win a guitar.

Make Ronz World a stop whenever you see his tent.

Many of the bands on the bill you all know. But some are new, or just new to us.

Skillet… as many times that I have seen this band live I have never left feeling that I did not see the best show of the night. Their set at INKCARCERATION was no exception. I sang every word and rocked out to the set feeling “INVINCIBLE”. Also, in case you did not know, crawl out from your rock and get your pre-order in for their new album ‘Victorious’ out August 2nd.

The Funeral Portrait was a band that was new to me. They took the stage with overwhelming energy and the audience responded in kind, creating the first mosh pit of the festival. This is a band you are going to want to put in your playlist.

Titans In Time, aka T.i.T. wowed me. The Ohio band reeled off aggressive power just the way I like it when they took the stage. I came, I saw, I left a fan. This is a band to keep your eyes and ears on.

Scattered Hamlet is our favorite “Hillbilly Rock” band. It had been way too long since we had seen and talked to the guys, a few years back at the legendary Whisky A-Go-Go in West Hollywood, CA.

Starset was a band that I have been a fan of for a long time now. I have always loved the sound and the look. I never thought that I would see them in a new light and like them even more. I was wrong. With the same passion and talent and some huge changes that blew me away, I re-discovered Starset. Imagine seeing Mad Max meets the Star Wars universe as the visual. The new look was awesome. Not only was the look new, but new music is coming in September. Get ready for a new Starset experience.

Rivals to me is a combination of Nothing More meets New Years Day – two bands I absolutely love. If you are not familiar with either of those bands I highly suggest you check them out. For those of you who are familiar with those other bands, I do not want to give away any more hints. Take my humble advice and see Rivals live. You will leave a fan.

Among the new to me bands was the Swedish band Kerbera. They were not only new for me to hear and see, but this was there first time ever playing in America, kicking off their USA tour at INKCARCERATION. The band self describes themselves as a modern freak show and a new take on alternative rock. After seeing the set and chatting with the guys I agree 100%.

P.O.D. proved that they have one of the most loyal fan bases in the music world. The sold out crowd from front to back became unhinged as the guys took the stage. Playing a part of ‘The Shawshank Redemption’ movie sound as their intro was utter genius. Standing in front of the prison as the audio came out was sureal. Front man Sonny Sandoval interacted with the crowd, showing and sharing his love for all, with all. As you can imagine, the fans did not complain. I do not think there was a song that the crowd did not join in on, proving once again that P.O.D. is a band that is still around because they have the power, the talent, and the fans.

Motionless In White is one of my favorite bands. Seeing them at INKCARCERATION was surreal because I got to see them in an atmosphere that seemed so them with the haunted prison on-site as their backdrop. I love all their music. In the last 2 albums, MIW has made some changes, but are keeping true to who they are while maturing as a band. Here is how I see it… Early Motionless In White was Macabe Metal Theater done right. The newer music is a very eloquent way to say “Fuck You!” to all haters and all demons that the guys seem to face, as we all do. I LOVE, LOVE, LOVE IT!!! In case you did not know, the new album out now is ‘Disguise’. It is a must-have. I was so stoked that when they took the stage they did a mix of older songs and yes, the new ones. The fans went bat-shit crazy, body passing, moshing and I was among those that were front and center. You not only need the album but you need to see them live. They are on tour now with Alice Cooper and Halestorm.

From Ashes To New had the sold-out crowd asses to elbows to be front and center to see them. The guys raise the bar for every show they do. I have seen them at both festivals and clubs and I can tell you they give no less than 100% every time

INKCARCERATION was also about Ink. “Get a prison tattoo”… words I am sure you thought you would never hear. In this case, however, it is all good. With top inkers from all over the country coming to set up shop in Shawshank for 3 days, it was truly a sight to behold. Walking through the hallway it was constantly buzzing with ink being done. Most artists were booked all weekend before they got there. Others allowed room for those who decided that this was the place to get ink. Artist Wave Judd, whom we interviewed last year, was back again and one of his clients was the wife of Akadia bassist Guy Daigle who played INKCARCERATION 2018.

Wave Judd with Jennifer Daigle, before (pic by Rockwell Anderson) and after (contributed pic)

Among bands getting prison ink this year was a member of Eyes Set to Kill. Now that is balls playing a show and getting your fingers tatted on the same day. You could learn a lot from this man. There were also tattoo contests daily. To watch a video announcing the day 1 tattoo contest winners click the following video…

Getting a tattoo inside an infamous real-life prison and a famous prison movie filming location is one more reason to make INKCARCERATION a festival to be a part of. I recommend Wave Judd. He is a master.

One little, but the very exciting unexpected moment did occur just prior to the announcement of the day 1 tattoo contest winners. Rockwell Anderson captured it on video, and you can see it exclusively at this link…

I could go on and on but I will leave you with this – get your tickets to INKCARCERATION as soon as they go on sale. It will sell out and you want to be one of the fans to have been there to experience it. Finally, after you get your tickets, book your appointment for your very own, professional prison tattoo! 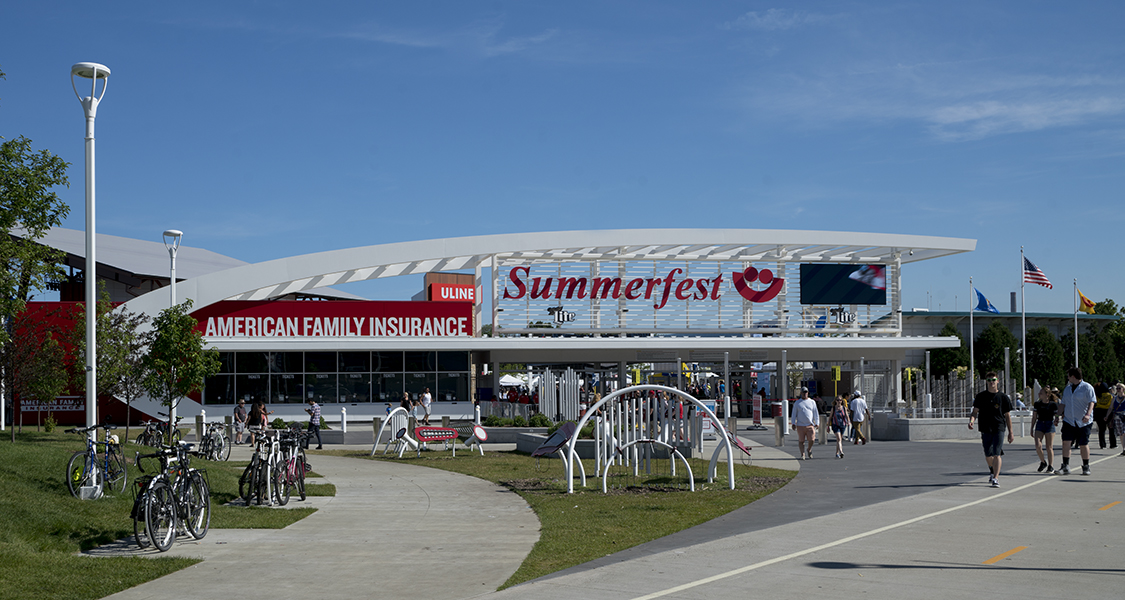 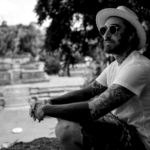