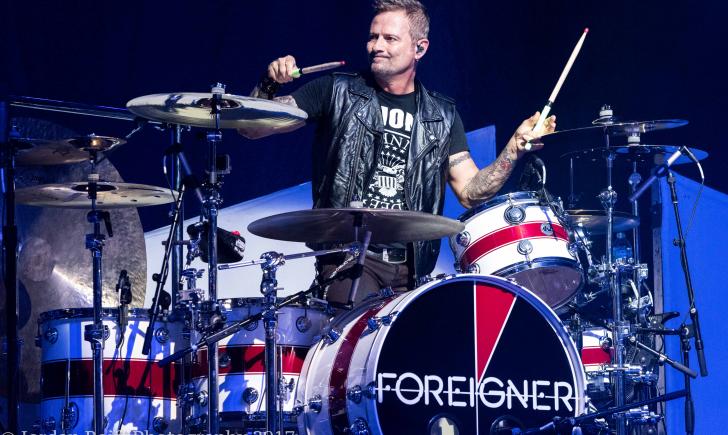 With a lineup featuring acts that are best known for music based in the 70’s, this tour promised to have a classic vibe, true fans in the crowd, and a promise of a showcase of everlasting talents. Jason Bonham’s Led Zeppelin Experience (JBLZE), Cheap Trick and Foreigner are a lineup that has a proven track record of being some of the longest lasting groups still on the road. As this tour marks the 40th anniversary of Foreigner, it certainly carried with it the promise of an exciting, crowd pleasing, and theatrical performance. While these bands may not have the ‘truly’ original lineups, they do not disappoint in the level of authenticity they create for those in attendance.

JBLZE features the son of original Led Zeppelin drummer John Bonham on drums, and predominantly covers classic Led Zeppelin songs. Opening the show with “Rock and Roll” really helped set the stage for what to expect tonight; lots of classic hits to sing along with, high energy, and a true experience for all the senses. While many fans hoped for a rendition of “Stairway to Heaven” the best known Zeppelin song was unfortunately left out. However, in their nine song set, they did include one terrific surprise; a cover of “When the Levee Breaks” by Memphis Minnie & Kansas Joe McCoy. As short as this set may have been, the feeling of Led Zeppelin playing for you was in full effect.

Cheap Trick truly is a band who needs no introduction. At almost any sporting event, BBQ, karaoke bar, you can bet you’ll hear at least a snippet of their music or its influence. While the rain had ended much earlier in the day, guitarist Rick Nielsen kept drowning the crowd and stage in guitar picks. His famous guitar changes for nearly every song was in full effect. From the cigar box guitars to the checkerboard patterns, nothing was missing from this show. While saving their two biggest singles “I Want You to Want Me” and “Surrender” for the later parts of their set list, they certainly covered a good variety of their discography, and certainly had the crowd dancing in their seats.

Foreigner took true performance art to a whole new level. No need for smoke and fire, or a ton of videos. Brilliant lights, great stage attire, and solid, loud music were more than enough to get people screaming at the tops of their lungs. Another band that you hear everywhere, their hits “Juke Box Hero”, “Urgent”, “Cold as Ice” (complete with a run through the crowd by Kelly Hansen). As well as “Hot Blooded” & “Long, Long Way From Home” featuring a guest appearance from original drummer Dennis Elliott, their 40th-anniversary tour is nothing less than amazing. They look and sound as if they have never lost a beat. This is not something many bands can say even after 10 years as a group, let alone 40.

Tours come and go, you may miss them this go around and say ‘I’ll catch them next time”. Sadly, as recent deaths inside the music industry have shown us, there is no time like the present; you never know when a tour may be a group’s last. These bands may be seasoned, but just like a 1969 Mustang, these bands prove that age is nothing but a number and they can still bring it, and crank it up to 11. With this tour, there is no shortage of amazement. If you don’t make it out to catch this tour live, you really are missing out!!!!