The First Noted Custom Tattoo: Long Before You Thought 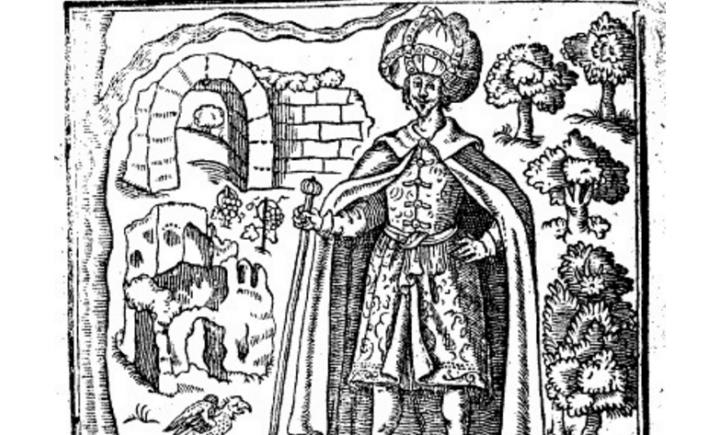 While you might think that custom tattooing is a fairly recent trend, as many historians and body-ink scholars have implied, you’d be surprised to find out that, in fact, the earliest recorded notation of customized body ink took place centuries ago. In the 17th Century, to be exact.

In 1612, Scottish author and world traveler William Lithgow traveled to Jerusalem on a holy pilgrimage. While on this journey, Lithgow and several companion travelers decided to do something completely modern—get tattoos to document the event.

Now, even back in the 1600s, getting inked was not a new concept. It wasn’t a brand new idea that sparked the ember of the inked revolution. No, in fact, it was quite commonplace, despite what misconceptions people may have about the era. It is not the fact that Lithgow decided to get a tattoo that makes this event stand out in tattoo history—but rather, what he did with the tattoo design he received. He customized it. 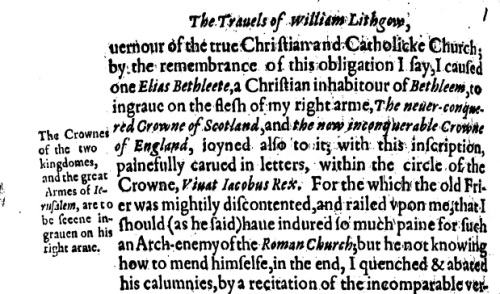 In 1614, Lithgow published a manuscript detailing his travel to the Holy Land. In it, he wrote this passage:

“In the last night of my staying at Jerusalem, which was at the holy grave, I remembring that bounden duty, & loving zeale, which I owe unto my native Prince; whom I in all humility (next and immediate to Christ Jesus) acknowledge to be the supreme head, and Governour of the true Christian and Catholicke Church; by the remembrance of this obligation I say, I caused one Elias Bethleete, a Christian inhabitour of Bethleem, to ingrave on the flesh of my right arme, The never-conquered Crowne of Scotland, and the now inconquerable Crowne of England, joyned also to it, with this inscription, painefully carved in letters, within the circle of the Crowne, Vivat Jacobus Rex.”

Now, while this might not seem historically important to you—here’s what this means for the history of tattooing. Lithgow deviated from the typical pilgrimage tattoo. Instead of going for the commonplace tattoo received in these cases, which would have been standard Christian iconography, according to tattoohistorian.com, he instead opted to celebrate the Monarch of his homeland—King James I of England, who had been formally known as King James VI of Scotland. This manuscript, published in 1614, is the first documented case of a custom designed tattoo: a turning point for the art form.

Of course, we can’t guarantee that Lithgow started this revolution. In fact, it’s hard to truly discern what most individuals had tattooed upon their bodies in these early centuries. During this time period, the standard of dress—particularly during portrait painting—limited the amount of skin shown. It was considered inappropriate to reveal too much of one’s self, and as there were no candid selfies or pictures as there are today, we can’t say for sure how most people appeared below their clothing. And, of course, ink doesn’t hold well during the decaying stages of the skin, limiting even more so what historians have been able to discern regarding the art form. If not for written documentations, we may not have known about the practice at all during these time periods.

We do know that after Lithgow’s declaration of custom ink that it continues to appear throughout early history.

Several documentations have detailed that during the early colonization of North America many European immigrants were utilizing Native American tattooing techniques and tools to ink themselves with European designs and phrases. Many Native Americans found themselves inking these travelers with crosses, the word Jesus, flowers, and many other popular European motifs—taking them out of their usual comfort zones of native tribal tattoos.

But, perhaps one of the most important things to note about Lithgow’s custom design is the rebellion behind it. During a pilgrimage to the Christian Holy Land, Lithgow opted to have a celebration of a Protestant Monarch inked upon his skin by an Orthodox-Christian-heritage tattoo artist. Let me break that down for you. His tattoo, as tattoohistorian.com refers to it, was “a conscious slap in the face to Catholicism.” The tattoo artist unknowingly inked a statement upon a man that was in direct violation of his own religion. Talk about early rebellion.

Of course, the famed tattoo cause quite a stir with the Catholic community and, in the end, was the causation of Lithgow’s capture by the Spanish Inquisition in 1620. Lithgow was tortured and beaten, and his King James tattoo was forcibly cut from his skin—as it was considered blasphemous by the Catholic religion.

Regardless of what happened to Lithgow’s tattoo, and Lithgow himself, one thing can be said for sure. Lithgow paved the way, through his documentations and published manuscripts, for historians to study and analyze the earliest concepts of custom tattooing.