In 2013, Seattle-based frontman Ryan Clark, from the Christian heavy metal band known as Demon Hunter, began conceptualizing the ambient and atmospheric electronic side project known as NYVES. Featuring Randy Torres, formerly of Project 86, the duo released their debut album titled Anxiety via Spartan records on June 23, 2015. The album is a collection of contemplative, dark, and intelligent tracks with droning beats, thick bass, and a 1980s synthesizer aesthetic to the likes of Depeche Mode and Nine Inch Nails.

The record was funded by a Kickstarter campaign in late 2014, going into the beginning of 2015, which featured an ambitious goal of $50,000. By early November the duo had reached over half of their goal and was well on its way to bringing a new vision to life. The crowdfunding campaign ending up exceeding their goal and, and NYVES raised a remarkable $82,702 with over 2,000 backers.

NYVES was designed as an outlet for the everyday heavy music that both members had been accustomed to throughout their music careers. After continuously exchanging sample tracks back and forth a few years, Clark and Torres were able to conceive a project that is more than just an electronic duo. It is an experience inclusive to all who have supported and donated to its success.

NYVES sat down to talk to Tattoo.com about West Coast tattoo culture, the creation of the album, their favorite ink, experiences, the state of the industry, and more.

Do you think that music, specifically genre, can influence the overall design of a tattoo? In what ways?

I think certain tattoo styles are definitely synonymous with genres of music. It’s common to see hardcore kids with neotraditional work, punk kids with gypsy-looking stick-and-poke, metal and hard rock guys with black and gray biker style stuff – sometimes tribal… and a lot of the hip-hop world has kind of gravitated to the Chicano style of guys like Mr. Cartoon. I think when you’re immersed in any scene or genre; you’re drawn to a style that meshes with it.

According to social media, your band claims Los Angeles and Seattle as home base. Do you have any hometown pride tattoos?

I was born in Southern California, raised in central Oregon and Northern California, and eventually moved to Seattle… so my hometown pride kind of encompasses the entire west coast. I have a really crude party tattoo on my calf of the words “West Coast” with the “W” hand sign. At some point, I plan on getting the outline of all 3 states.

These days it’s hard to say. There isn’t an obvious major difference like there used to be. I think, generally speaking, there is less of a stigma surrounding success in LA – and that comes through in the music. In Seattle, sometimes it seems like musicians are afraid of being too commercial or pop, so you hear things that are more abstract, subversive, disenfranchised.

There was a point in time when the scenes were much more polarized – especially in the 80s and 90s. I think the age of the internet has really neutralized that divide. Today there is less identity in one’s locale, and therefore less influence. Being influenced by your surroundings takes actual involvement, and people these days are generally less involved with anything that doesn’t have a screen.

‘Anxiety’ was released back in June via Spartan Records. Can you tell us a little bit about the inspiration behind this album and what it means to you?

This album was a lot of fun to make. Since the beginning, there’s been a very easy-going nature to the band. We just came together to make something we wanted to hear and hoped that it would ultimately sound unique. It started very casually and naturally ramped up into something more serious as we continued to record songs.

The general inspiration was simply to do something for fun. Randy and I have both been obsessed with electronic music for as long as I can remember, so exploring that for the first time was really exciting.

We’re just stoked that we were able to make the album and that people seem to be digging it. The whole process has been great – it almost brings back memories from my teenage years of starting a new band and seeing it grow from the ground up.

Have you encountered any fan tattoos pertaining to your band?

I’ve yet to see a NYVES tattoo, but my other (primary) band Demon Hunter has maybe as many as 1,000 fan tattoos. There’s seldom a day that goes by that we don’t receive an email with a new Demon Hunter tattoo, and that’s been happening for 13 years now. We try to stay up-to-date by posting them on our website, but we inevitably fall behind because they’re sent in so frequently.

Pick your top three tattoos – tell us a little bit about them and why you got them.

I have so many favorite tattoos for various reasons. Some are really well done, and others just serve as great memories.

My buddy Levi Polzin did matching tattoos on my friend Jimmy Ryan and I a while back. It’s a traditional bear head and crossbones with the initials “LSC” underneath it. It’s a bit of an inside joke, but I’ve always been stoked on that piece. Levi has done quite a bit of my work – my hands, knuckles, and a half dozen or so pieces on my arms. He does great neo-trad work. Lately, he dives into traditional Japanese work, which he’s really excelling at.

A few years ago I decided to get my head tattooed. I’ve been shaving my head for the last 18 years, and I thought it would serve as a great canvas for a traditional American eagle. I just love all of that iconic symbolism from the golden age of tattooing – it’ll never go out of style. I hit up my buddy Dave Quiggle to do it when I was visiting Southern California. He’d never done a head tattoo before, so I think he was a little weary. I knew he’d nail it though, which he did. I get way more compliments on that tattoo than any of my others.

My most recent tattoo are the words “I think it’s gonna rain when I die” on my right elbow. Alice In Chains has been one of my favorite bands for most of my life, and I love that song, from the album Dirt. I’ve wanted to get those words for some time now. I think it perfectly meshes my love for the band with my love for Seattle.

In 2013 I was given the opportunity to design their album “The Devil Put Dinosaurs Here,” which was a major highlight in my career as a designer.

The tattoos I like the most these days, for myself, are the band-related ones. They just speak more to my passions. I have lyrics from Pantera, Metallica, and Alice In Chains.

Admittedly, I don’t keep track the way I used to. I’ve invested in so much, it’s hard to keep up with every aspect of the cultures I’m interested in – but here are some of the people I dig off the top of my head…

Do you think reality TV has normalized tattoo culture?

Absolutely. I’ve always liked the idea that my tattoos would push me out of the ordinary, but it’s just not that way anymore. Not only are people accustomed to seeing it, but people who never would’ve been tattooed in the past are now covered. It seems like being heavily tattooed used to afford you access to a particular set of subcultures – people on the fringe of society in one way or another. Now it’s homogenized to the point of normalcy, so it feels like a big part of the spirit or essence is dead. I’m not sure if reality TV is responsible for it on the whole, but it certainly had a lot to do with it.

I worked really hard to get to the place I am now – and I’ve carved out a life for myself that’s allowed me to have tattoos without the concern of how it would affect my professional life… and now that I’m here, it turns out you can do nearly anything these days without that concern – especially in a city like Seattle. I’ve never liked the idea of playing things “safe,” or following trends, so I wish it didn’t end up this way.

Have you had any experiences being denied something based on your appearance/body ink?

I haven’t experienced anything all that gnarly, but it’s something I feel more when I’m in the southern states. Down there you still get people staring and making comments under their breath. There’s something I almost like about it though. I’m a fairly introverted person – not much for talking with strangers. More often than not, my tattoos create a lot of unwanted conversation with people I don’t know… but when I’m in certain parts of the country, my tattoos actually help me maintain my privacy.

The worst I’ve got up here in Seattle is probably just moms with strollers crossing the street when they see me. I used to work in a really wealthy, stuffy part of the city – and that’s the only place I’ve experienced that.

Other than that, the only thing I notice is when I go somewhere to buy something expensive – like a car dealership or a nice clothing store – it can be hard to get people to help you in any serious manner.

What are some of your favorite styles of tattooing?

I see all these 20-somethings walking around today with only great traditional work and I’m so jealous. When I started getting tattooed in the 90s, it was all about fat-line new school work, so I’ve got a bunch of that stuff on my body’s most prime real estate. That style started to look really dated to me really quickly. It’s like the tattoo equivalent of a Bare Naked Ladies record or something. There’s a lot of impressive new school work out there, but it strikes me as anything but classic.

That being said, if I could go back and start all over, I’d have either all American trad/neo-trad, or all black and gray Chicano style.

Any plans for getting more tattoos? If so, can you tell us what you’d like to get?

I’ve always got plans for more. Finding the time and money (and the free space on my body) is the hard part. Coming up with ideas is easy for me.  I have a completely blank back, so that’s eventually going to be something.

The guys in Demon Hunter always give me a hard time because I’ve yet to get a DH tattoo and they all have them. I’m the founder and only original member of the band, so it’s a bit ironic. I’ve told them, it’s kind of an intimidating task for me, because as the singer/songwriter, I feel like mine has to be a shining example – and there are a lot of really good ones out there at this point. I will eventually get one, but I’m still dwelling on what it’ll be. 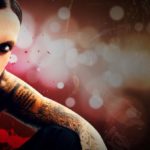