Up and coming metalcore/ heavy rock band Designer Disguise, based in Seattle, WA has released the Official Music Video for the title track “Surface” off their sophomore release which dropped in August ’17.

Designer Disguise are optimistic after a year of struggle. Lineup changes and guitarist Josh Wildhorn’s battle with leukemia left the group reeling during 2017. However, they persisted and released their sophomore EP and went on their first west coast tour. This release of their video for “Surface,” the title track from that EP, marks a goodbye to the past year and a determined welcoming of the new one. If you are excited about this song then you have a lot to look forward to from these guys in 2018 including new music and the return of Wildhorn to their stage performance. Jackson Bengtsson, lead singer of DD, is excited about the band’s ability to stay together through such hard times stating:

“…’Surface’ is a symbol for who we are as a band. The fact that we managed to finish writing, recording, and mixing an entire album on our own during the most tumultuous time in our lives is astonishing. Our passion is palpable and now that we are all healthy things are looking better and better. ‘Surface’ is about being stuck and not able to express yourself and therefore losing touch. Writing and recording this song helped me to move past some of those roadblocks and I now feel closer to my friends and self than I ever have.” –Jackson Bengtsson 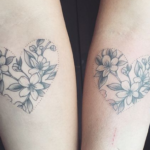