It’s no secret that the music industry, especially when it comes to hard rock and metal, is saturated with male-fronted acts. The Hollywood-based rock band known as Stitched Up Heart completely defies the status quo and proves that female-fronted bands can wear that same aggressive outfit while simultaneously representing a certain porcelain undertone. Vocalist Alecia Mixi Demner, better known as “Mixi,” met up with Tattoo.com amid the Digeridoo Destruction Tour to discuss life on the road with a group of boys, past and present ink, and the overall presence and role of women in the hard rock and metal scene.

How has the tour been so far?

This is the coolest tour ever. Obviously, it’s very entertaining. There is a lot of testosterone, so I had to bring a girl– a merch girl this time. We usually tour with a female fronted band, and this was the first time it was gonna be dudes. We found her in Denver and were like, “Hey, you’re cool. You wanna come on tour with us?” It was really random. I asked a bunch of people, but all my friends wanted way too much money. We don’t even make that– how can you ask for that much?

What’s the grossest thing about being on tour?
Everybody is really farty. There are farts, and then they talk about weird stuff and boy parts. I’m just kind of like a fly on the wall and watch everyone. At least I do have a merch girl to hang out with. We’ll look at each other and be like, “Oh man.” You wake up– boy talk. You go to bed– boy talk. When girls get together we talk about similar things, but it’s maybe not as gross I guess. We’re all sparkles and rainbows [laughs].

Being a woman in the music industry can be challenging in a lot of ways. Tell me about a time that you’ve maybe experienced sexism while on the road.

You know, I’ve got like four bodyguards. If there is any weirdness– I call them my ducklings. I’m like the mama duck. We have the one good baby duck that follows behind me, and we’ve got three ugly ducklings. It hasn’t ever gotten to that point where I need protection, but there have been some occasions where people have had too much to drink and they want to let you smell that on their breath. It’s like “C’mon man. You’re spittin’ all your whiskey on me.” I don’t get creeped out too easily, so if things get a little too weird then I kind of just go somewhere else. I think there’s maybe been one occasion where someone said, “Hey, leave our singer alone.” That was like a year or two ago. Everyone is pretty respectful. It’s actually kind of the opposite on this tour because there’s a lot of hot cougar women that want all the dudes [laughs]. When you come to a show with a female fronted act you notice a difference in the audience.

Do you have any tattoos that you are particularly proud of?

I like my guns on my stomach. I drew the one on my bellybutton when I was like fifteen. It will eventually be just a black heart. But the guns hurt so bad. But I feel, like, cool when I go off in metal detectors [laughs]. It’s like, “I brought my guns with me– I hope that’s not a problem.” I pretty much always go off in metal detectors whether it’s a bra or something else.
The clouds on my arms and the hot air balloon just kind of represent me floating through life. There are some roses in there to kind of represent romance. I also have some daggers to represent past members of Stitched Up Heart, and a skeleton key. I also have “Hopeless Romantic” on my knuckles. I started off with stars on top of my arms, and when we were home for seven months I decided to go in and get some filler every couple of weeks.

What is your favorite tattoo shop?

The Electric Pen in North Hollywood– Mr. Monster. He’s really cool. He hooks it up, and anybody that says “Hey, Mixi sent me,” he’ll give a little deal. He has pretty much done all the stuff on my arms. Except for my back, which was done in Florida. I originally lived in Orlando, and I lived above a tattoo shop when I was in college. It was a venue in the back with a stage in the garage, and the front was a tattoo shop, which is where I got the wings on my back.

I had these little wings I drew when I was in high school, and one day we were just sitting around and he said, “I want to do a huge piece on your back.” I was like, “Okay, sure! Why not?” So we actually went to do the wings, and it was so big that we couldn’t get the paper, so we had to wait another couple of days to start on it. I didn’t realize it was like eighty hours later until it was done. It all took about two years to finish.

Who are some of your musical influences?

I like Nancy Sinatra and Ella Fitzgerald. I gravitate towards old Louis Armstrong and Frank Sinatra. Gwen Stefani. I think she’s a badass. She’s kind of like my hero.

What do you expect to be the next major tattoo trend?

Wow. That’s a hard question. Stitched Up Heart tattoos. It’s gonna be the biggest trend [laughs]. Everyone is gonna get a stitched up heart on them. 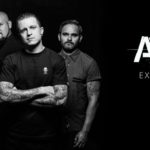