Every artist in the spotlight has stories hidden under or in this case –in– their skin. Born in San Francisco, California in 1968, comedian Margaret Cho is a pioneer for female comics, fashionistas and ink enthusiasts alike. From television appearances to political advocacy, to mind-bending burlesque, to nationwide comedy tours– Cho is an entertainment powerhouse and will probably run the world in 2020. Cho is of Korean descent, and her father is a writer of joke books as well as a newspaper column for a Seoul publication. She attended the San Francisco School of the Arts in high school where she studied alongside performers such as Sam Rockwell. Cho began performing in the early 1990s and made an appearance on Golden Girls in 1992. Though unsuccessful at first, she went on to appear on several more TV shows including All American Girl, which lasted for nineteen episodes.

Her social and political commentaries through comedic performance provide a very honest and relatable view of current circumstances around the world. Cho is openly identified as bisexual and often discusses the nature of sex and equality in her stand up performances. She founded the website known as Love is Love is Love, which advocated the legalization of same-sex marriage in the United States. It’s no secret that she is thrilled about the current state of marriage equality after last month’s Supreme Court decision.

Cho has made such an impact on the community through laughter, activism, and art that she has even had a day named after her! San Francisco declared April 30th “Margaret Cho Day” in 2008. In light of her upcoming PsyCHO tour this fall, Tattoo.com was let in on some of her prized ink and upcoming pieces. Take a look at what she had to say.

It was in 2004, and it was my huge back and ribs piece done by Ed Hardy. I grew up around people who were getting the very first big bodysuits from him, and my family sold Tattoo TIme at their bookstore, so he was a fixture in my childhood. I always knew I would grow up to be heavily tattooed and that it would be Ed Hardy.

I love my Ed Hardy tattoo as well as my horse portrait by Eddy Deutsche, which was actually a tribute to my dog Ralph, who I believe always thought himself as ‘above’ being a dog– rather more a majestic creature. Eddy understood this perfectly as his dog Hadji had just passed away. I love memorial tattoos, and this is the only one I have. I also have Washington and Lincoln on my kneecaps from the amazing Craig Jackman at American Electric in Los Angeles. These, along with the Medusa head with 13 snakes of hair on my stomach, are my real favorites.

I think ‘couple’ tattoos are always a bad idea!

There are lots of things yet to be finished, and I have also promised Grime my lower left leg for a sleeve– a vision of hell to match Chris O’Donnell’s vision of heaven on my left leg. Also, James Spencer Briggs has some work left to do on my back as does Mr. Cartoon. Craig Jackman has to put in some banners on my knees– the presidents need to say something, but I haven’t figured out what yet.

Catch Margaret Cho on her PsyCHO tour beginning in October. Visit her website for more info on upcoming dates and appearances. Cho for president! 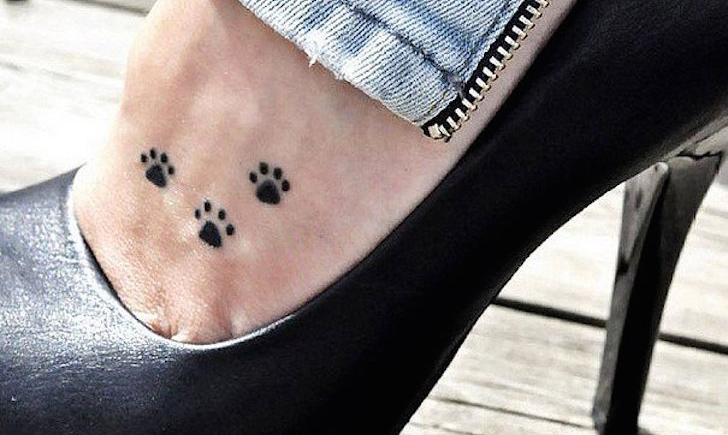 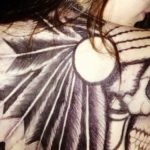