If you didn’t think an American Idol could have some impressive ink, then think again. Singer James Durbin was a Top 4 contestant in Season 10 of the ever popular FOX program. Despite his elimination, Durbin has gone on to inspire many Idol newcomers with his inked rock star persona. Following his stint on American Idol, Durbin has launched a Pledge Music campaign to help fund his upcoming album. Durbin sat down to tell Tattoo.com about his marriage, his music, and some of his favorite ink.

My very first tattoo was a small red star on my inside left forearm. One of my only memories of my Dad is that he was covered in tattoos. Growing up and seeing pictures of him, and still to this day, he always looked like a cool dude. I wasn’t going to get something big for my first one— I didn’t know if I had the pain tolerance and I was broke. Haha. So I picked the small red star, and as they say, “You’ll be addicted.” I was, and the rest is inked.

In no particular order:

The Koi fish half sleeve on my right arm. I got the privilege to be a guest on NY Ink and the bigger privilege of getting tattooed by the amazing Ami James. I brought in the idea of wanting the Koi to stand out from his thousands of Koi that he’s known for. I wanted mine to have a watercolor look to it. One heavy-handed six-hour sitting, plus a free sandwich and I was an extremely happy customer.

“Forever Yours” on my left forearm/upper wrist. This tattoo is extremely important to me. It is one half of a “matching” tattoo with the other half belonging to my wife, Heidi. Together they read “Forever Yours…Faithfully” from the Journey song “Faithfully.” This was Heidi’s very first tattoo, and just like me, she’s now addicted. These words ring true to our relationship. They were the decoration on our wedding cake, and the song played multiple times during our reception.

”Daddy” Popeye on my inside left forearm. The first and only tattoo I ever wanted. Like I said, my dad is the only reason I ever wanted tattoos in the first place. Lots of people that knew him would call him “Popeye” because he would talk like him, laugh like him, and his only bass warmup was the “Popeye the Sailor Man” theme song. If that wasn’t enough, he had a tattoo on his left forearm of Popeye with my name under it. There are few things about him that really have a lasting impression on me, as I was so young when we lost him, but this tattoo makes me feel so damn good every time I look at it and think about him.

I was on tour a couple of years ago. We had a day off and drove to Cedar Point in Sandusky, Ohio. As we were waiting in line to ride “Top Thrill Dragster” for the second time, we started to play “Who Can Find the Shittiest Tattoo” game.
There were many top contenders, but I believe the worst we found during that round was a camouflage striped tiger wielding an AK-47 in one hand and an American flag in the other. Game over, man. Actually, it was on a woman’s calf!

I don’t have tons of different artists do my work, nor do I keep tabs on lots of people— ain’t nobody got time fo’ dat! All the guys I’ve been fortunate enough to have tattoo me and enjoy each-others company would be:

I’ve been asking myself this a lot lately. I’m really itching to get my left arm finished and balanced. It’s so much fun getting the tattoos— actually sitting in the chair and getting worked on. I really enjoy that part. But I just can’t figure out what it is that I want to get in the open area. There’s some really good retail left open there and I’m overthinking it for sure. I try and get tattoos that mean something to me. Some are impulsive “$50 Sailor Jerry’s Flash” but most have a history, a reason, and a meaning. My wife Heidi recently got her left sleeve finished by an artist named Misty Galvan who owns and runs a One Woman Shop out in the country called Corralitos Tattoo in Corralitos, CA. I’m still so impressed by how spectacular her lines and color are that I’ll be going to her for my next tattoo, wherever and whatever I decide on.

My wife Heidi and I went in for our (formerly) usual “$50 Sailor Jerry’s Flash.” Don’t say “ya get what ya pay for,” because before this, everything we got was a perfect experience with seasoned professionals. But this day wasn’t like the others. This day we got stuck with a learner from out of town who was guesting at this shop. My choice was a heart with “Celebrate” written on a banner going across it to commemorate my new record that was about to be released. Well, his was the heaviest hand I’ve ever had the displeasure of being on the receiving end of. And that’s counting six hours with Ami James. Our tattoos came out looking infected, uneven, blotchy, etc. Once we got home, washed them off and couldn’t contain how unhappy we both were, I wrote a very professional email to the shop, as we are still regulars of the fine establishment. In return the owner/head artist fixed both of our brutal tattoos, gave us a free tattoo, and gave each of us gift cards towards our next tattoos. That’s a shop owner who loves their shop and loves their clients. I look at it this way, tons of people have giant tattoos they hate that they paid a ton for. We have tiny tattoos that have been fixed, and we learn to live with them. It could always be worse.

For more information on James Durbin and his Pledge Music campaign click here. 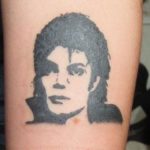