We Came As Romans has been blazing across the U.S. headlining the “Cold Like War” tour in support of their 5th and most recent studio album release. During their stop at Trees in Dallas, founding member and unclean vocalist Dave Stephens was generous enough to spend time with us in the green room between sets of the opening bands.

So what did Dave have to say about the new album, the meaning behind the album title track (Cold Like War), upcoming festivals and U.K. tour, and the stories beneath his ink? Watch, listen, and enjoy as Dave fills us in on all things WCAR! 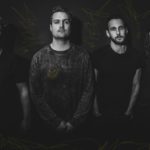