The 2010’s have been jam-packed with band reunions and anniversary tours. Perhaps one of the most notable is the reunion of the Orange County’s Atreyu. And no, we aren’t talking about the protagonist of Neverending Story. The metalcore pioneers were first popularized in the early 2000’s after their debut Victory Records release titled Suicide Notes and Butterfly Kisses. Since then, Atreyu has produced five more studio full-length albums in last year’s release, Long Live, which commemorated the band’s reunion after a three-year hiatus. Tattoo.com was able to catch up with frontman and newfound tattoo artist, Alex Varkatzas. Take a look at what he had to say about his leap into the tattoo industry, life between music and family, Orange County culture, the longevity of the band, and more.

We’ve been informed that you are now a tattoo artist. How long have you been doing it, and what made you want to start tattooing?

Newly invented, yeah. I’ve been in people’s skin for a couple years now. You know, I’ve been getting tattooed since I was eighteen, and I just always loved the art. I really love American traditional type stuff. I had always collected it and been around it, but I had never thought to actually do it or paint, or anything like that. This last round of shows when Atreyu came back— we had to go to Australia and do some flying and stuff. I hate flying. I was like, “Man, I wanna try something different— I’m gonna f*ckin’ start drawing and painting.” So I started drawing and painting tattoo flash and stuff like that. I was like, “Oh, okay, I can do this.” I was figuring out stuff and had a little help from some friends, and it just kind of went from there. My wife was getting tattooed by this guy, Rich Pineda, who ended up mentoring me. We just hit it off and were talking about stuff, and he was like, “Man, I’ll teach you.” We worked stuff out, and he taught me how to tattoo and kind of gave me a chance to get going, so that’s pretty awesome.

You’re from Orange County— how would you describe tattoo culture there versus other places you’ve been?

I think we have everything in Southern California because LA, Orange County, and San Diego are just three separate individual things. Whether it’s black and grey, or traditional, or f*ckin’ neo-traditional, or— there’s somebody. Even in the shop I work at, alone, there are dudes who can do everything— much better than me, mind you. You know what I mean? So it’s really f*ckin’ cool. There’s something for everybody. Not only that, but there are a bunch of somethings for everybody. If you like black and grey, there are like sixty black and grey dudes in Southern California between LA, Orange County, and San Diego. And if you like American traditional spots— I think it’s one of the better spots in California— especially LA.

Do you think that music genre, especially heavy metal, influences what is going on with current tattoos, stylistically speaking?

I think in a weird way we all start getting tattoos because we want to emulate something or someone that we like or thought was badass. For example, if you see someone with Pantera tattoos and you think, “Oh, that’s sick,” then you might end up getting something like that. Like, I have “Passion” tattooed across my stomach— horrible example, but that’s how that works out. You see shit that you like, then you look into it and find some designs that you can come up with yourself. I don’t know. Back in the day, I had seen like hardcore kids with mostly American traditional tattoos with maybe slightly newer twists on them. So in a way, yes, music does definitely influence tattoos.

Atreyu was on a bit of a hiatus for a while, and Riot Fest 2015 was your first major reunion show. What sort of personal growth, if any, have you noticed about yourself and the other guys in the band in that time?

We’ve gotten older. We have less hair and a little bit more body fat. Dude, like having a kid and a wife— in the time away from each other we have just learned about life. We’ve been a band since we were twelve or thirteen, so being in a band from twelve or thirteen until twenty-nine or thirty— that only gives you, like, one way of knowing the world. And I thought we all needed to learn other ways and experience other things. We knew we were lucky, but I feel like I was eighty percent appreciative and twenty percent unappreciative. And now I’m one hundred percent appreciative because I understand what’s going on if that makes sense. I think perspective is the biggest thing that we’ve all gained. I get to make tattoos and run gym, hang out with my wife and kids, and do music. And I could be doing some responsible desk type stuff, which I guess I’m smart enough to do, but I don’t have the should for it. And I would die doing that. I’m so happy I don’t have to do that.

What are some of your favorite tattoos, and the story behind them?

I have my wedding ring tattooed on me. I love it because I can just look down or something when I’m homesick. I can see it all the time, and I can’t lose it. I was playing with my ring on at Knotfest, and I threw my finger down while jumping around like an idiot. I was all sweaty and my ringer totally shot off my hand. We couldn’t find it, but we eventually found it after the show. I was super lucky. I was very stressed out. So I have a tattoo of that. I have tattoos of my English and French bulldogs on my knees— little portraits of them, so I love those and get to look that them all the time when I’m gone. On the back of my leg, I have a “Hot Stuff” devil standing on top of ice for my son’s birthday. It’s like a posture of my son standing like a sassy little badass. I have a bulldog fighting a cobra that I f*ckin’ love. It’s giant. It takes up my whole thigh. I hate snakes, and I love bulldogs. So it’s symbolic for me because f*ck snakes

Do you guys get to bring your family out on the road at all?

My wife works full-time, and little dude is only fifteen months, so we don’t really wanna subject him to this quite yet. We think we’ll probably bring him to a show sooner than later, but it’s just a big experience, you know what I mean? You don’t wanna mess with his ears or anything, even with ear protection. We’ll bring him on tour soon, but he hasn’t been out to one yet.

Have you exposed your son to heavy music at all?

Oh yeah, right off the bat. I don’t listen to tons of heavy music, but when he was born we were listening to Street Dogs and Cock Sparrer, and one day when we were napping I snuck in some Madball. So he’s into some good stuff. He likes good music.

Have any of your band mates let you tattoo them?

Not yet [laughs]. Hopefully soon. We haven’t been on a tour where I’ve brought out my tattoo gun. I think on this next tour I’ll be bringing out my machines, and I’ll be tattooing, so maybe soon.

Have you ever tattooed yourself?

No [laughs]. I’m running out of spots, and the spots I have would be weird for me to tattoo myself on. You can’t really stretch skin that way, but you can try.

Being in a band since you were twelve, what are some experiences that you’ve had that were based solely on your experience?

You know, I’ve never really had any experiences, but I watch my ass around cops a lot of the time. Something about either my tattoos or the way I look— I get attention from police. I don’t know what it is. Maybe they’re right— I’m sketchy, so they are right to profile me a little bit. So that’s kind of rough because if you’re being sketchy you don’t wanna get called out by the cops. TSA hits me up sometimes, but it’s like, “Dude, I’m obvious. I don’t have a joint— I’m not bringing heroin on the plane. I don’t wanna f*ck with that shit” [laughs]. Old people will harass me, but I usually get left alone— except for the cops. 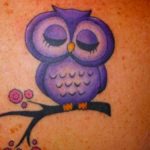