Our first Young Guns experience was at the Aftershock festival in Sacramento, CA in September 2014. We nterviewed them for the first time in May 2015 at Northern Invasion in Somerset, WI. We got a chance to catch up with them again a couple weeks ago at Warped Tour in Milwaukee, WI. The five-piece rock band is currently hitting stages everywhere, promoting their epically delicious album “Echoes”, out this September (read our album review here at Tattoo.com).  What did Gus have to say about his Warped experience, the new album, and his ink? Read on to find out…

Mischievous Mel: I am on the couch with the singer of Young Guns. Can you start your day any better?  Speaking of Fantastic, I am so lucky because I got to hear you new album “Echoes”.  I heard it and I loved it. Many people have not heard it because it has not dropped yet.  So can you tell everybody about the new album “Echoes”?

Gus: Sure. Yeah it is our 4th record, our 3rd North American Release. We are really excited about it. We did it in February with a guy called David Bendeth out in New Jersey. He has done a lot of great records in the past… Of Mice & Men, Paramore… kind of things like this. He really just pushed us. He pushed us to be a better band than we were before, to write better songs than we’ve written in the past, and to perform them better. As a singer, a vocalist everyday, it was like, spend hours checking vocals, hours going in. I would finish, he would be like “Naw… that is not good enough. You are going to have to do some more”. You’re like, Oh my God…. but then when you finish and you come back and you listen to everything you realize… you’re like holy sh*t that does sound better than I sounded before. Or you know.. whatever. So it was a very challenging experience, but I think it being as hard work as it was has enabled us to craft a stronger, (more) consistent album than we’ve done in the past. And I am really excited about it. I think it’s got a lot of energy… its got real swagger to it. I am proud of it. There is 1 or 2 down tempo kind of intimate moments to it, but on the whole it is a pretty rocking record. I am really proud of it.

Mischievous Mel: I have to say his pushing really worked. I mean I have seen you guys before. I believe it was Rocklahoma a couple years ago the last time you were in the States or a few times ago. I fell in love with the band. I am like “how can it get any better?” It did. In fact, your album is so good that you guys are a featured artist at Tattoo.com. I don’t know if you know that or not.

Gus: I was recently told. So yeah it is really a honor. I am really excited. We have been a band for 6 years now or something. It feels like we are just getting started in some ways. But this record really did feel like a bit of a rebirth of the band. We changed lineups a little bit. We’ve got Chris Kamrada playing drums. And we just kind of felt hungry and excited again. I think that you can hear that in the album itself. So I  am thrilled. It is great to start getting feedback from people who have actually heard it. As you say it has not been released. So we sat on it for a little while. You only really start to  know what you have when other people come back at you and talk  to you about it.

Mischievous Mel: Speaking of new bands and new experiences… Warped Tour. This is like no other tour in my opinion. It is chaos… controlled chaos. But what is it like to be a band playing Warped Tour?

Gus: Yeah controlled chaos is a good description. It is funny… you wake up everyday, you open the door to your bus and you step out. It is insanely hot- instantly. There are something like 5 or 6 different stages of music pumping and 15,000 people going crazy — you are stepping into a whirl-wind. But it is fun. It is very unique. We have played many festivals in our time, but we have never played the same festival everyday for 2 months as it moves across the country. You know whether you are a punk band, a metal band, or whatever there is a kind of DIY ethic involved in this festival. It is kind of… well… all the bands are on the same level. No matter if you are Sleeping With Sirens or a band like us. You could be playing at midday or 7 at night and there is no stuff on the stage, like a big production. It is just about going out there and playing your songs. Do the best you can. It is a grind, but it is also super validating. For me, it is like I reconnected to why I fell in love with music in the first place when I was a teenager. So I am actually really, really enjoying myself out there.

Mischievous Mel: So it is kind of like playing naked out there? You got to get out there and forget the show behind you, it is all about that moment. Speaking of naked, I see you have ink on you. Is there any you would like to share and talk about?

Gus: I have a few… yeah a few. This is the first one I ever got. It is an anchor. Most of the males in my family have an anchor on them somewhere or another, because our grandfather was in the Merchant Navy in the second World War. And this is the first line of a Welsh poet called Dillon Thomas. This is the first line of one of his poems “Do not go gentle into that good night. Rage, rage against the dying of the light”. And that was the poem that was read at his funeral. I think that this was my first tattoo from when I was 20 years old. I was terrified. I was like f**k it! I will go do it. Um… it felt like a nice little tribute.

Gus: I have collected bits and pieces from all over the world. I can never have as many as I like because it is expensive, but my favorite artist is a woman called Valerie Vargas. She does really great, vivid color work. She is really, really cool. She did that one as well, which is a Medusa.

Mischievous Mel: Really? And it kept color that good?

Gus. Yup. Which is remarkable.

Mischievous Mel: That says a lot about her.

Gus: All the color has fallen out of this one but I am still very fond of it. This was done by a guy called Cham. A Spanish guy who works in London. He is really great. It is just some praying hands. I have a bunch of others. Kind of stupid ones dotted all over the place. It is fun to collect tattoos right?!

Mischievous Mel: I have to warn you… I have been known to have pants taken off, including Johannes from Avatar. I got him to strip.

Mischievous Mel: That is what I said too, but I won’t force you into that one. Warped Tour has been hard enough on you.

Gus: I feel like a dodged a bullet on this one. And it is not the cleanest tour of all time.

Mischievous Mel: I want to thank you for your time. It has been sincerely awesome. 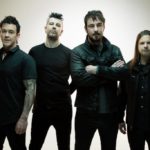