A CONVERSATION WITH ADRIAN ESTRELLA – ASSUMING WE SURVIVE – WARPED TOUR

Back in 2010 when we first started covering the Inland Empire (Southern, CA) music scene, we fell in love with one of its hardest working bands – Assuming We Survive.  Since then, we’ve both spread our wings. ROCKwell UnScene Magazine has criss-crossed the U.S. many times covering the biggest and best festivals through the years, and we’ve recently expanded our coverage to Europe. Assuming We Survive graduated from playing local Warped Tour dates in SoCal to the full 2016 tour.

It had been about two years since we had seen the band perform live in SoCal (where we and the band reside), so where do you think we caught up with them?  Milwaukee, Wisconsin.  Click below to hear what lead singer Adrian Estrella had to say to Mischievous Mel about life on the Vans Warped Tour, personal fan stories, and the stories underneath his tattoos (click ‘continue’ to see pictures of his ink).

That’s Chris Musser on left, vocalist for the band From Ashes to New. 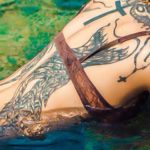