Chicago-based instrumental, post-rock outfit The Color of Cyan recently dropped their debut album, Agape, via Guideline Records. The album was recorded in Puerto Rico, Chicago, California, and Mexico City, and was mixed by Greg Norman at Electrical Audio and mastered by Bob Weston.

According to The Color of Cyan, “‘Agape’ is our journey through this world. Even though the moments are unique for each one of us, we are all connected by those feelings.”

Made up of Eduardo Cintron (guitars), Henry Cole (drums), Jorge Santana (bass), and Rene Torres (violin), The Color of Cyan was formed in 2000 in San Juan Puerto Rico.

Encompassing nine tracks, the album begins with “Inception,” opening on emerging luminous colors and shimmering orchestral sonic waves, akin to entering the dazzling far reaches of the galaxy. Highlights include “Little Stars,” which merges low-slung, glowing layers of post-rock with hints of prog-rock. The result conjures up suggestions of Pink Floyd and ELO, only creamier and dreamier. Finessed percussion, rolling and rumbling on gentle round tones, imbues the rhythm with beguiling timbres.

A personal favorite, “Sun in Leo,” features a gentle, gleaming intro flowing into seething, suffusing waves of coloration, while a heavy bassline and distant drums inject the tune with a galvanizing rhythm. Reminiscent of an ambient version of the Deftones, the song portrays both elegance and muscularity at the same time.

For some reason, “The Day We Met” recalls Rush crossed with RA. The tune pushes out dense mists of prog-rock savors, along with tangs of symphonic metal. Whereas the title track drifts and floats on Pink Floyd-like tendrils of prog-rock, followed by taking on aromas of Scandinavian metal.

The final track, “We Will Rise,” is at once graceful and austere, rolling out on glittering surfs of sound.

The Color of Cyan has it going on! Wonderfully wrought, Agape reveals sonic allure, polished textures, and visceral interludes. 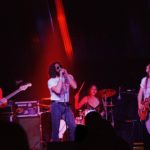