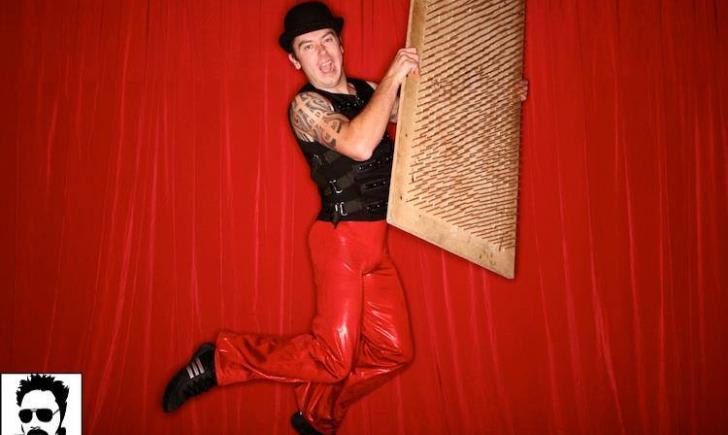 Two weeks ago I had the pleasure of attending the Orlando Tattoo Festival. The entire event was impressive—filled with artists, vendors, and several unique acts unlike any I’d seen before. But, while there were some unique BMX riders, body painters, and burlesque dancers, there was one particular act that really stood out, in my opinion—Tom Hill from the Carnival of Curiosity and Chaos.

Tom Hill lives the life of a Carnie, traveling and performing across the country with his very own band of fellows, the Carnival of Curiosity and Chaos. He frequently travels the tattoo festival circuits, as he himself is a member of the inked community, and this is where I was lucky enough to get to chat with him a bit.

Hill started performing at an early age, joining various theater companies in the Chicago area, as well as being heavily involved with a handful of magic organizations and a gymnastics group. “It all started out with an interest in Magic, Theater, and Gymnastics,” cites Hill. “Over time it all morphed into what it is today.” He attributes his grandmother for pushing him throughout his childhood, and into his adulthood, as she always encouraged him to follow his dreams and passions. “I love being on stage in front of any type of audience,” states Hill.

He knew he wanted to share this love of magic and performance with audiences nationwide. In fact, it was one of the driving concepts behind the Carnival. “My business mission statement is to create a fantasy world for the audience to live in to escape time and the world,” he explains. Hill’s visions have brought to life the days of old—with interactive shows, parlor tricks, vintage costumes, and carnival games, all with a dark, mysterious edge. Think Cabaret meets Tim Burton. “The Carnival lifestyle survived the great depression,” says Hill, “and will continue on even as time and technology change.”

So how does someone from the Carnival circuit get involved with a tattoo festival? In addition to Hill being heavily tattooed himself, one of his featured acts in the Carnival of Curiosity and Chaos is human suspension. “The first tattoo convention I worked was doing Human Suspension performances,” states Hill. “It was later that I began to pitch the idea of doing sideshow, circus, and carnival in with the event.” He continues, explaining a little bit about the relationship between the Carnival lifestyle and that of the Inked community. “If you look back to the history of American tattooing, it was tied in with the circus and sideshow tents. Now, I try to keep that reminder of the past alive for the guests who attend the events with bringing those other elements back together.” Hill states that he currently travels and performs for various tattoo conventions.” He adds, “I am always looking and wanting to be on the road.”

While a large portion of the Carnival’s revenue is created from corporate events, birthday parties, and the like—Hill confirms that the tattoo circuit is a lot more accepting of his style. “I love the tattoo community, especially to be performing within it,” he affirms. “I feel it’s more accepting, which then allows me to push more with the complexity of acts.”

Tattooed himself, Hill takes his inspiration for his ink seriously. “My leg is the current project being worked on, with various artists contributing to a tribute to the circus, sideshow, and carnival world,” he details. “The larger tribal [on his chest and shoulder] is a Maori style which I was fascinated with when I was a teenager, back when I worked at the Field Museum of Natural History.”

Currently, Hill has 20 performers on the Carnival of Curiosity and Chaos roster and their acts range anywhere from circus themed—such as aerial acrobatics (silks, trapeze, high wire), juggling, and stilt walking—to sideshow acts like machete ladders, bullwhip tricks, and underwater escapes. Fire tricks are also part of the Carnival’s list of wonders, in addition to tribal and belly dancing, LED hoop dancing, and more. When I myself met Hill, I had the pleasure (reluctantly, at first) of being involved in his show after my boyfriend so kindly volunteered me for one of Hill’s acts. Before I knew what was going on, Hill had me donning thick leather gloves, bending over, and sticking a rose between my legs.

Within seconds, I could feel a rush of air across my backside as Hill cracked his bullwhip, shredding the delicate rose into a thousand pieces. Shortly after, he had audience volunteers (my boyfriend being one of them…as payback is always worse!) playing a game of human pin the tail on the donkey. What did this mean? I got to laugh hysterically as my boyfriend was blindfolded and verbally guided by the audience in order to staple (Yes, I said STAPLE) a paper donkey tail directly onto Hill’s exposed buttocks. The show itself, which only consisted of Hill for this particular venue, included everything from walking on broken glass to hammering a dozen or so nails into his own nose, as well as the bed of nails, the machete ladder, and a truly scary event which involved a half-naked Hill, a rope, and a bowling ball…  Let’s just say, Hill requested the children leave the room for that particular stunt. I’ll let your imaginations do the work on that one.

Overall, the entire experience really drew me into the concept of the original Carnival lifestyle. I really enjoyed watching the show, interacting, and meeting Hill after the fact. He is a fascinating individual who is doing big things for the Carnival circuit—and I’m personally very happy to see him co-mingling with the tattoo industry. It really is a good fit; one I hope that continues.