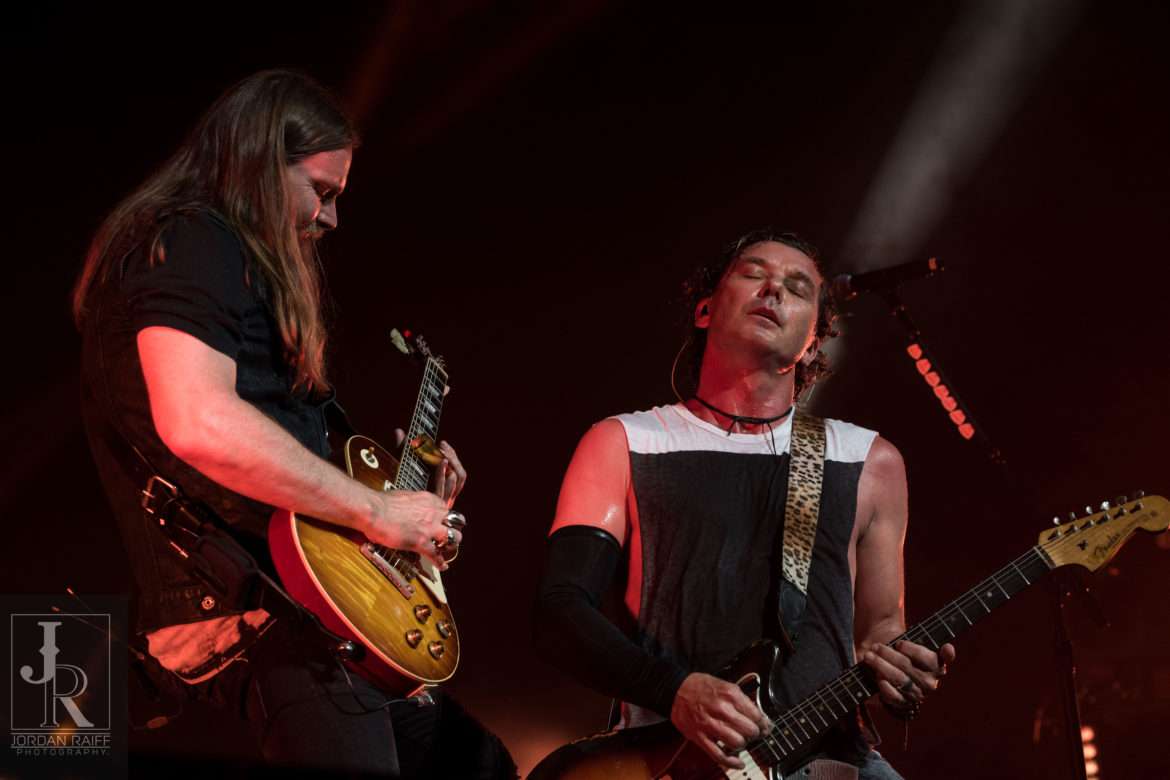 Bush With The Dirty Hooks, STP, and The Cult

Tragic loss, adversity, band member changes, relentless performing, and time can take their toll on bands. Bush, The Cult, Stone Temple Pilots, and The Dirty Hooks have all certainly endured their fair share along the way. With a lineup of three headliners plus an opener that fit together like a puzzle, and setlists that compliment this fact to boot. ‘Revolution3’ plowed into the Mid Florida Credit Union Amphitheatre on the 8th of August like a bull into a china shop. While the show began a few hours before another terrific FL sunset, it wasn’t hotter than hell as the humidity was a lot lower than it has been recently.

Hailing from Las Vegas, The Dirty Hooks are a newer band on the tour circuit. After opening for STP in Vegas and greatly impressing them, they were invited to open for the tour. While this trio each bring a very unique sound to the band, they mesh together like the buffets and free whiskey does at the casinos back in Vegas. With dual guitars (one baritone, one lead) and a female drummer who kicks some SERIOUS ass with her mixture of classic rock, jazz, and a bit of funk in her rhythmic styling. While their five-song set might have seemed short on the surface, their songs have some decent length to them, making their sophomore album “Kiss the Devil and Run” a great a great candidate for those late summer road trips. 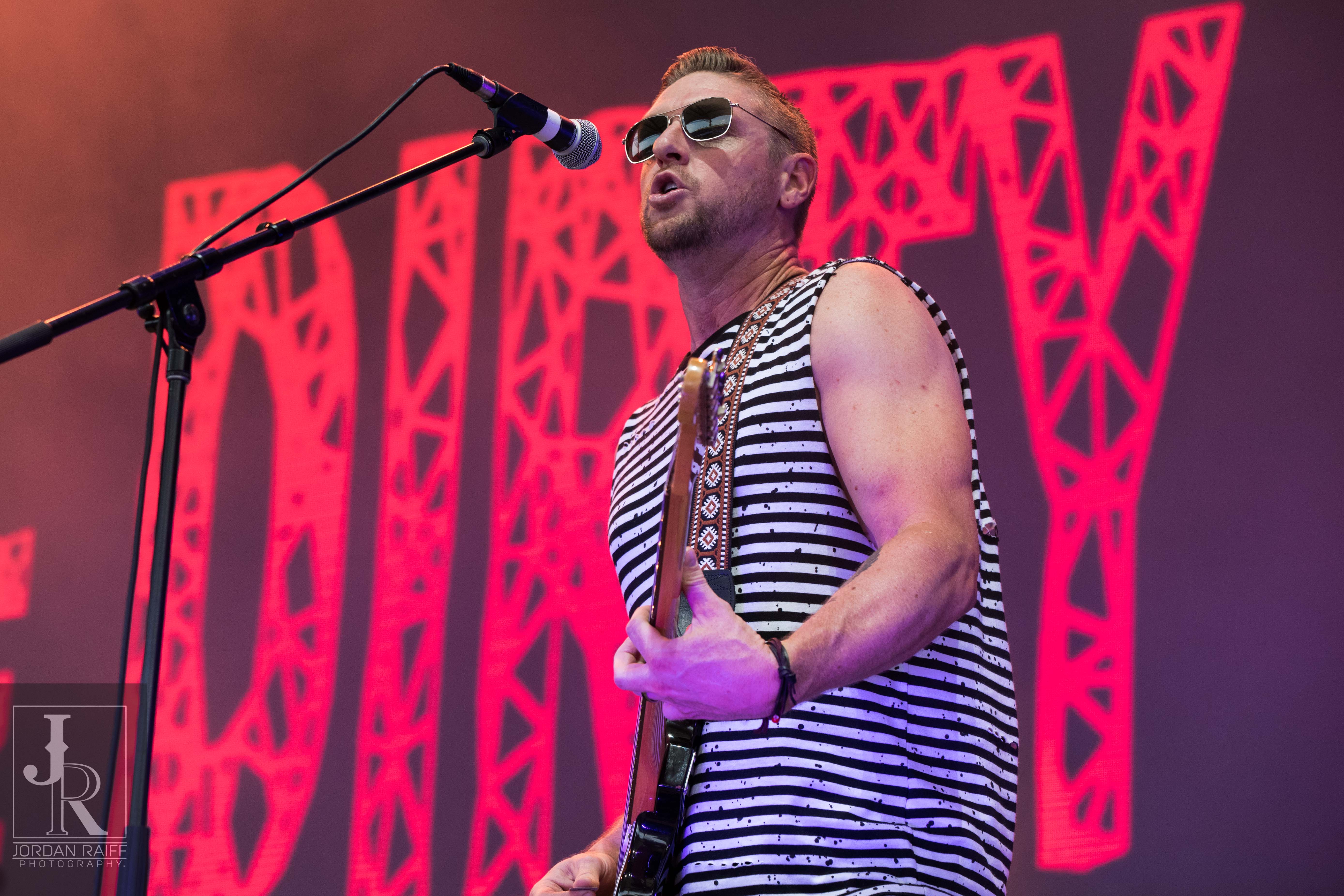 Kicking down the door next, STP hit the stage to roars of the fans in attendance. Talking to fans, this was their first time seeing them with Jeff Gutt as lead singer. Despite all the years performing, the role of vocalist has been the only area STP has had changes in. Immediately hitting the stage and launching into Wicked Garden with the type of energy and ferocity that would make both the late, great Scott Weiland incredibly proud, as well as the dearly departed Chester Bennington.

Continuing on through a blistering 12 song set, they touched on facets across their whole catalog. With Meadow from the most recent (and second consecutive self-titled album) serving as a taste of the magic Jeff brings to the studio, the whole set is simply mind-blowing.  A lot of critics had wondered if STP could survive after losing two lead singers. This tour answers that question with a resounding ‘You’re Goddamn right we can!!!’ The rest of the band shows that no matter what, STP will plow forward, and make you take notice while they do it. 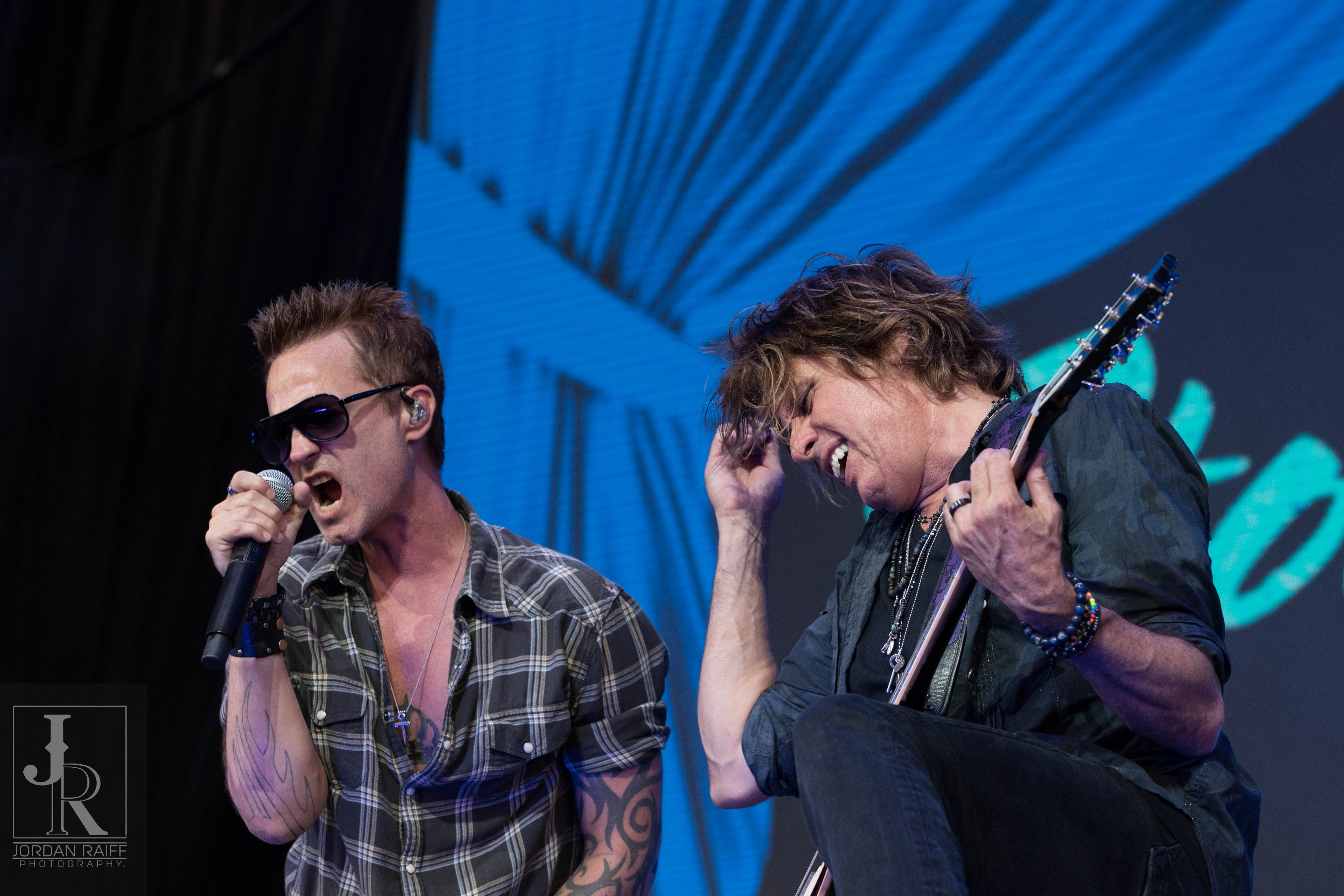 In the middle slot for this tri-headlining tour was The Cult. With founding members Ian Astbury (lead vocals), and Billy Duffy (lead guitar) being featured extensively, this 11 song set proved that as long as those two are on the stage together, the song remains the same. In large part, this is because, after 34 years, these two still have not lost a step. At this point, many bands (if even touring) lack the ability to performing to the levels they once had. With The Cult, this was not the case. Covering a lot of their classic hits like Spiritwalker, Rise, and She Sells Sanctuary. Plus true fan favorites like Wild Flower, The Phoenix, and Sweet Soul Sister with an L.A. Woman from The Doors Teaser sprinkled in there too. Seeing to their performance live you can really see how many bands find inspiration from them. Not just in the way they write their songs, but also with how they put on a live show, and have the fans immersing themselves fully in the moment. 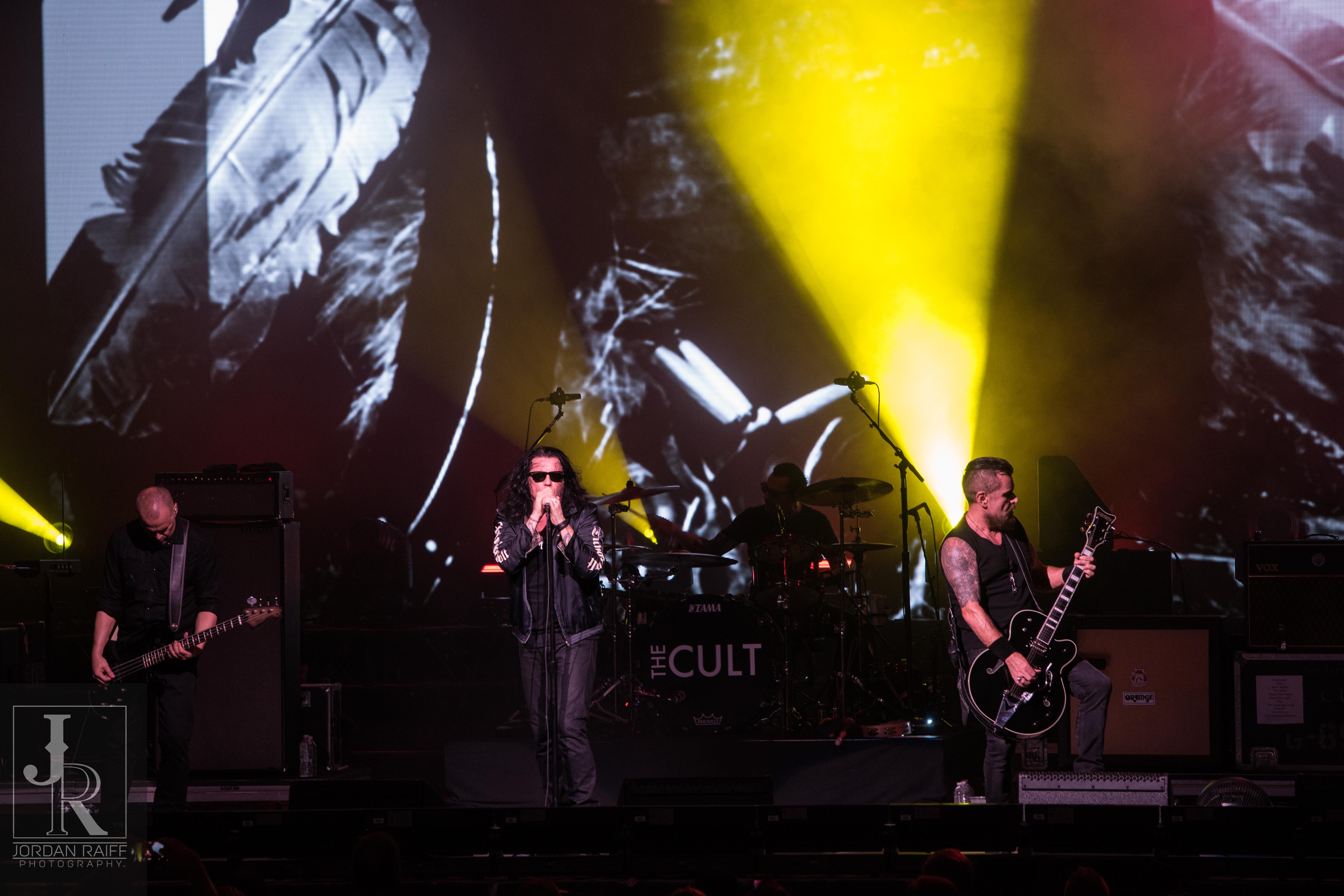 The Cult. Photo by Jordan Raiff

Closing the show was British band Bush. As the opening chords for Machinehead played, I could feel the same excitement running through my body I felt when I first heard their debut album ‘Sixteen Stone’ as a pre-teen while visiting my older cousins. Memories of seeing Gavin Rossdale magazine photos hanging in the girl’s lockers as I walked down the hall, the music of Bush being played everywhere, and of singing Glycerine to a girl at the skating rink flooded back like a tidal wave. When they played it live, the house lights dropped, and Gavin had everyone light the night with their cellphones. While it’s not exactly the same as the lighter tribute, the lights of the phones mixed with the solo spot on Gavin is something really special. As a large majority of the audience sang along, the rest of the band came back to finish the song with him. The vibe they give off as a band is one of deep respect for their fans, and they work together like a well-oiled machine. The 10 song set included a cover of Come Together from The Beatles, This Is War, The People That We Love, Swallowed, Little Things, and closing with Comedown. 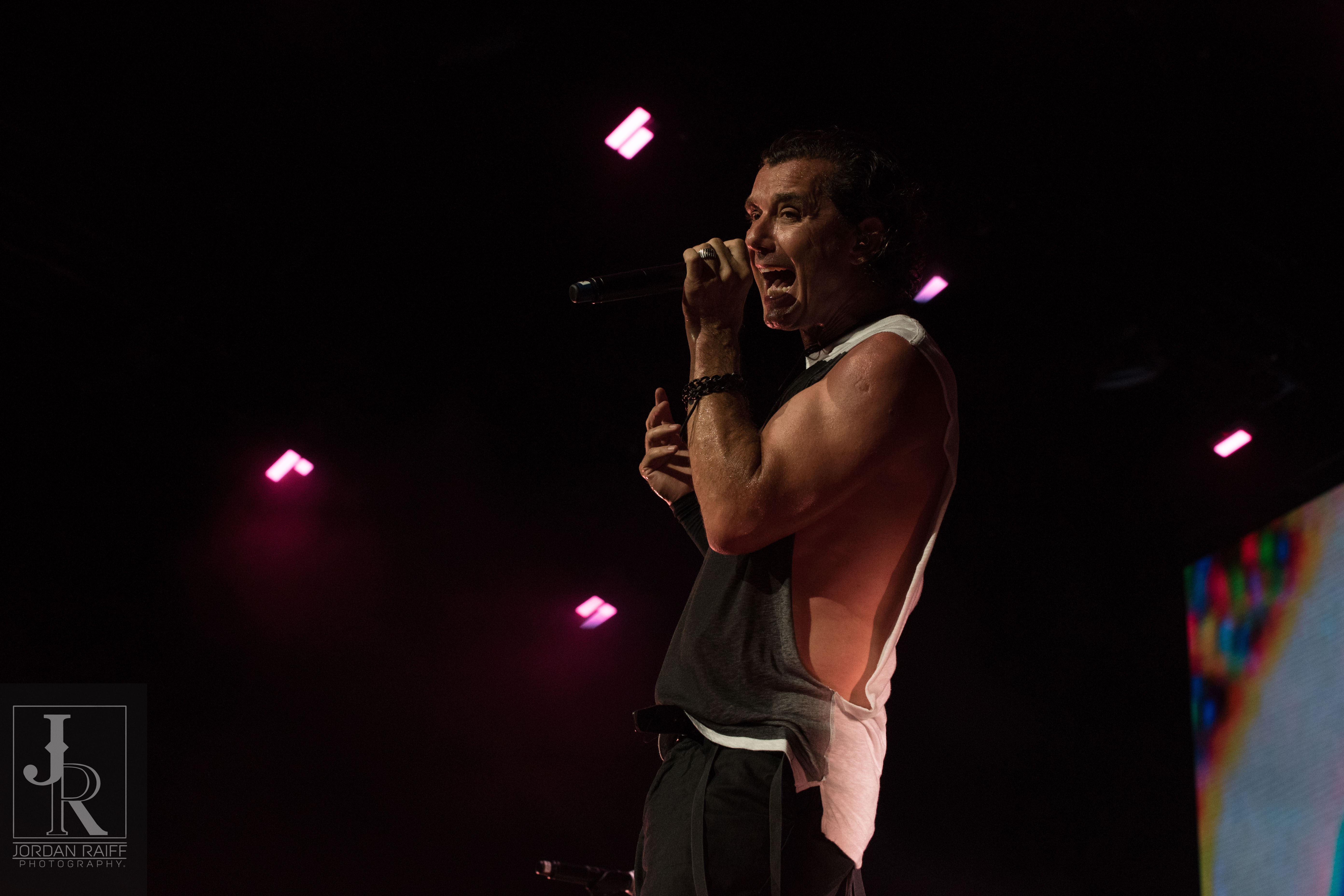 One of the best parts of the whole show is watching Gavin interact with lead guitarist Chris Traynor, and bassist Corey Britz. Whether they are joining together for some vocals or playing off one another, their ability to play as a family and to feed off one another is something usually only seen in bands that do nothing but tour. Bands who are looking to tour really need to study how these guys do things. Red lights are usually detrimental to photographs. It’s why many aren’t published. Yet the lighting they chose makes for some magnificent shots. The members play to the crowd as well as to the photographers, and I want to personally thank them for this. It makes covering the concerts ultimately more special when we can capture that connection to share with the fans, especially those who may have missed the show.

This really is a tour that brings back a lot of memories for most anyone who goes. Songs from high school, first drinks, etc. are all things you heard people talking about as they were leaving, and they are right. Seeing people who have teenagers who can sing along as a family to a majority of the whole concert is not something you can find very easily. This tour does that in spades. Add in the meet and greet, plus the side stage watching upgrade opportunities, and you have the summer tour you cannot afford to miss if you call yourself a fan. The tickets, merchandise, and even upgrades are all reasonably priced. Get out there to support music, treat yourself to a great night, and get home knowing you just shared the same connection and experience with thousands of other people. It’s a powerful feeling. 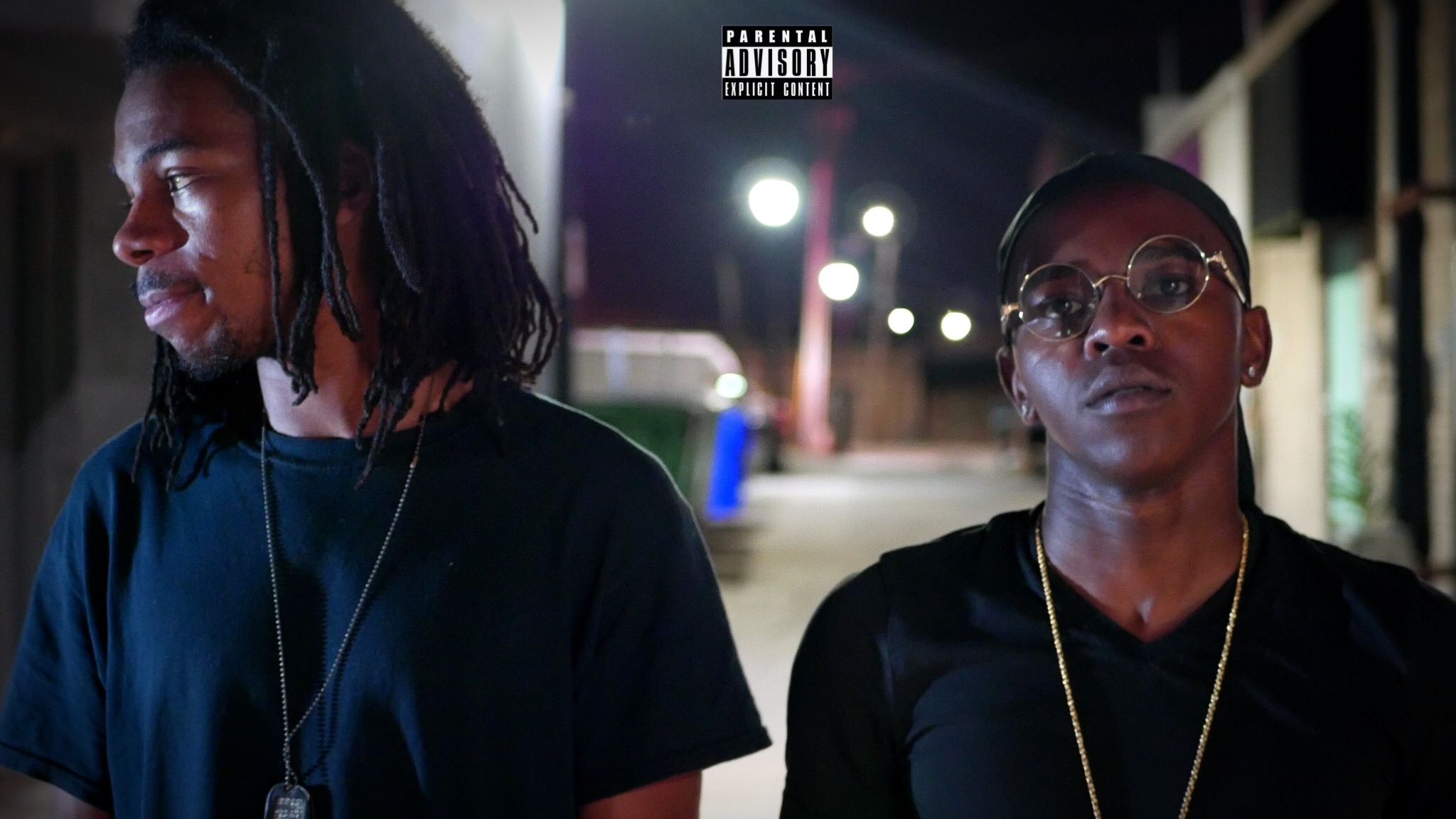