San Francisco alt-rock trio, Black Map, released a powerful new single today, “Ruin”. The song is from their upcoming release, In Droves, scheduled to drop on March 10, 2017 via Entertainment One (eOne) in North America and SPV overseas.

“‘Ruin’ was one of the first songs we wrote for In Droves,” says bassist and frontman Ben Flanagan. “The song is from the perspective of someone who sees the world coming apart before their eyes and detailing the chaos as they look for a way out.”

“Ruin” is currently available on all major streaming services and is being offered as an iTunes instant gratification track.  If you pre-order the album today, you will get the previously released “Run Rabbit Run” single along with “Ruin” as a download.

Black Map is hitting the road with Chevelle this month in a co-support role with Dinosaur Pile-up. They’ll be kicking off the tour in their hometown of San Francisco at the legendary Fillmore on January 13th and finishing things up in Boulder, CO at the Boulder Theater on January 26th. 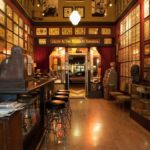