Our first NiteRain experience occurred at a lil’ club in North Hollywood called “Skinny’s” last December, where this Norwegian “Sleeze Rock” band had just escaped the dark and frozen Scandinavian tundra for the much warmer climate of Southern California.  Our next encounter came at Rocklahoma in Pryor, OK, where the band was finishing up a short U.S. run before heading back across the pond to play Sweden Rock.

Mel: Hey everybody it’s Mischievous Mel here at Rocklahoma 2016 with Rockwell UnScene and Tattoo.com, and I’m with NiteRain! Introduce yourselves.

Morten: I’m Morten and I play the drums.

Frank: Frank and I play the bass.

Addy: Addy and I play the guitar.

Mel: How would you get people who have not seen you or met you to come to your show?

Addy: Well we put on a high velocity, kickass rock show. If you’re into partying and rock and roll, come see us.

Frank: Yeah we don’t mess around.

Sebastian: We haven’t really woken up yet.

Morten: I tried to shower, it didn’t really work.

Sebastian: We are going on at midnight tonight, right after Disturbed.

Sebastian: If we hit the stage today right after Disturbed, there will be a lot of people.

Mel:So who wants to talk about their ink first?

Sebastian: I have an American Eagle, I don’t know why I have it. I have “California” and it’s supposed to be “Girls” here, so “California Girls”.

Mel: Does she do all of your tatts?

Sebastian: No. She did this one and this one, and the rock and roll on my side. We all did a NiteRain tattoo from our first album ‘Crossfire’ with a brass knuckle on there.

Morten: I have a bunch of sh*t. I have some starts across here, my grandmother’s birth year, I have the naughty bear right here, and the my lunch box that says “Death” on it. I have a “High Voltage” tattoo, a skull with a drumstick through it’s head because I hit so hard and and a have a little lady right here. I also have a work in progress right here getting done by Sally from Victoria Ink.

Addy: I only have one tattoo because I spend way too much on guitars, but it’s a really nice portrait of Jimi Hendrix by a Norwegian artist. I really love it. Her (the artist) name is Electric Lynda at Attitude Studios in Oslo, Norway.

Mel: So tell me where you’re going after Rocklahoma.

Addy: After Rocklahoma, we’re driving all the way to Florida where we’re going to take a flight to Sweden to play their Rock Festival.

Mel: Thanks guys! Safe travels and hope to see you back here in the States again soon! 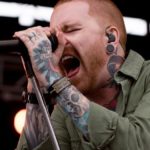