Home MISS MAY I – INTERVIEW AT ROCK ON THE RANGE: TATTOOS, MUSIC, TOUR

MISS MAY I – INTERVIEW AT ROCK ON THE RANGE: TATTOOS, MUSIC, TOUR

Rock on the Range offered a little something for all varieties of music fans. For those of you who are Metalcore fans, you know who Miss May I is and what they are all about. For those of you who are new to the band, meet the guys: Levi Benton – unclean vocals, B.J. Stead – lead guitar and  backing vocals, Justin Aufdemkampe – rhythm guitar and backing vocals, Ryan Neff – bass guitar, clean vocals, and Jerod Boyd – drums, percussion.

Miss May I is one of those bands that explode on stage with a sound that mixes clean and dirty vocals backed by melodic guitar riffs, blast beats, and metalcore-stylized breakdowns. Miss May I is a band that energizes the crowd and grabs their attention. Out of all the pits I’ve seen, Miss May I has some of the best ever. So what did Ryan Neff have to say about Miss May I and tattoos? Here is what he shared with Rockwell Unscene and Tattoo.com at North America’s largest outdoor festival, Rock on the Range…

Mel: Hey everybody it’s Mischievous Mel here live at Rock On The Range and I am here with Miss May I!Ryan: My name is Ryan, I play bass and sing in Miss May I.

Mel: You guys are amazing. You’re a band that started out on the Warped Tour scene and now you’re crossing over into stuff like this.

Ryan: Yeah it all started here at Rock On The Range I think in 2014. We already have had two records out since then but we dropped a record in ‘14 the weekend before Rock On The Range and then we did Mayhem Festival and Knotfest, and it stuck. We’re one of the lucky bands that started in the Warped tour side-

Mel:  Wait, luck had nothing to do with it.Ryan: I think it’s starting to go that way. The big dogs are starting to notice the bands from our side of things. We’ve all kind of stuck together the first six or seven years of our career because we’ve sort of been just pulling off of each other. It’s cool that we’ve got friends that are starting to get those opportunities. We’ve done a tour with Five Finger, an Avenged tour, we did Trivium and Killswitch and started to get some of their credibility over here.

Mel: Who do you want to tour with as a band?

Ryan: Well I saw your photo. I’m a huge fan of the last two Avatar records. When we did Mayhem Festival, my buddy Ruben from Upon a Burning Body showed me one of their records and I loved it. We been on three or four festivals with them but we always end up playing at the same time. It’s usually like that. Tomorrow at another festival up in New York I’m going to see them because we don’t overlap. Our buddies in Trivium are here today. We played at the exact same time as them. That’s just how it is. When you’re working on the festival you’re definitely not watching who you want to see.

Mel: Can you tell people where to find your new album?

Ryan: ‘Deathless’ is the first record, we dropped it at Warped Tour last summer and we’re about nine months into that record. We played three songs off of it today which is kind of crazy considering we only get thirty minutes but it’s been going over pretty well. That’s my favorite records so far that we’ve done. Starting out the show with “I.H.E.” really get’s everyone going.

Mel: I like that a lot of bands like you guys have been dropping a song off the record a couple days before the show so that people can sing it when they come see you.

Ryan: We’ve done a Warped Tour where we dropped a song before we released it and we really just wanted everybody to have a chance to get to know it before the show, and now nine months later everybody knows it.

Mel: I want to talk about your ink, can you tell me about it?

Ryan: Yeah, so this is by my buddy Tim Knight. I met him through a guy that we had gone on tour with and he’s up in Maryland. It took like 60 something hours on this arm and 30 something on this arm. This was from a guy named Billy White from here in Ohio. I got them so long ago, I finished my arms really quickly when we were touring early on. I got my chest started by Tim recently but it’s taken forever. I’m too much of a wuss to get it finished. I just redid my legs up to my knees. My little brother is a tattoo artist – Caleb Neff in my hometown Springfield. He started my legs.. It’s happening left and right.Mel: So if I asked you to “Drop ‘em” it would be all for publicity? Are you gonna finish your chest?

Ryan: I am. The guy doing this is the same guy doing my arm, and he lives in Maryland which is another setback being as I live in Ohio. We’ll get there eventually. 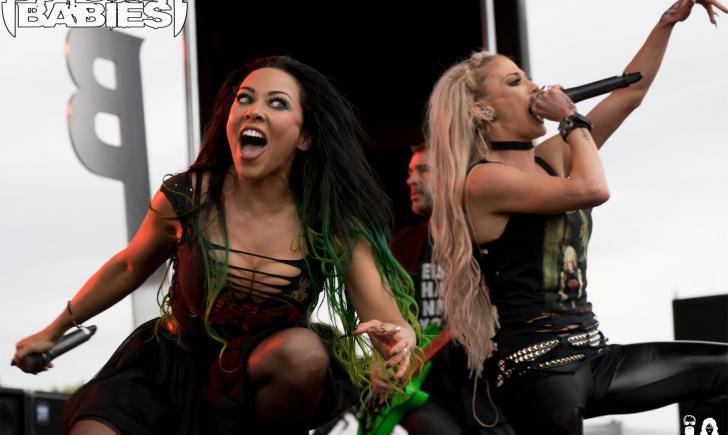