posted by ROCKwell UnScene
Straight out of Nashville and on a stage near you is Jelly Roll. With a sound that infuses rock and rap with a fist full of epic attitude, he offers something unique for fans from all walks of life. He stopped by the Tattoo.com and ROCKwell UnScene media table at Rock on the Range to tell us about his music, his ink, and tales from the inside. His new album “Sobriety Sucks” is out now and includes songs that feature Struggle, Alexander King, and Doobie Bandz. Keep reading to find out what went down at Rock On the Range with Jelly Roll.

Mel: Hey there it’s Mischievous Mel here at Rock On The Range 2016 with Jelly Roll!
Jelly Roll (JR): Howdy Howdy!
Mel: You guys braved the weather to come out here and kick some ass. Going by the album name “Sobriety Sucks”, I’m guessing you aren’t going with that today..?
JR: Yeah we’re definitely not sober today. I woke up on like ten hours of sleep and was like, “Adderall and Whiskey. Let’s Go!”
Mel: Three hours of sleep is a nap c’mon.
JR: I’m trying to have drinking competitions with anyone that will.
Mel: Well we might do that on camera.

Mel:Your new album, tell us a little bit about that.
JR: It’s kind of more like a mixtape to me. It’s just a body of work that we put out called ‘Sobriety Sucks’. I had to quit smoking weed for a long time because of the Board of Probation in my state and I didn’t like it very much so I wrote about it. I’m dropping another one in six months called ‘Addiction Kills’.
Mel: You guys put on a fantastic show.
JR: We had a great time. The biggest thing about the show to me is enjoying ourselves.
Mel: Is this your first Rock On The Range?
JR: Absolutely.
Mel: Did you hear that? We broke his cherry.

Mel: Talk to us about your face tattoos.
JR: Yeah I tattooed John 15:13 on the side of my face. Greater love has no one than this: to lay down one’s life for one’s friends. I got three tear drops. Everybody associates that with crazy shit but with me it was “Father forgive me”. It was repentance of sins, that’s why I put a cross next to it. When my little brother died, his sister had his social security card, so his signature is on the side of my head.
Mel: You have one on your neck too. It looks like a building.
JR: That’s the Batman building, not just a building. It is the Batman building, but it’s also the AT&T building in downtown Nashville. Nashville has gotten really popular, I’m of the few people that’s really from there. I tell people, any one of the cities in this country that you see somebody walking with a guitar, even LA, you want to stop them and say, “Who are you you? Who are you playing with?”. In Nashville, so many people walk around with guitars and no one talks to them.

Mel: You’re tattoos are beautiful.
JR:  These pieces are from a state of my life where I wasn’t artistically driven and when my brother had died. I tattooed all the people that were in my inner circle on my arm; just randomly on my sleeve. That’s the tattoo that means the most to me, it’s kind of like giving somebody their flowers while they’re still living. I know that’s crazy, but that is my favorite.  That one [on the stomach] right there was done with a guitar string!
Mel: How painful was that?
JR: It was awful. I was in a weird place where they were tattooing me anyways.
Mel: Is that a story that you want to tell or are you not allowed?
JR: I was in a place where we had nothing to do but get tattooed. They restricted my freedom and I knew a man who made a tattoo gun out of a tape deck, with a guitar string in it. The most talented people that I’ve ever met in my life are incarcerated, to this day. The best guitar players, the best singers, best tattoo artists, some of the most lyrically talented people I met are incarcerated. So shout-out to everybody who has somebody in prison who wasted their talent; pray for them.

Mel: Do you have plans on any new tatts?
JR: I have some room available. So if you’re like a super famous tattoo artist and I’m big enough for you to tattoo me, hit me up. I want some real tattoos now! These were all done before I thought I would live to be this old.
Mel: So for people who don’t know you’re kind of like Yelawolf.
JR: Yelawolf is a good friend of mine, I’ll take that comparison.
Mel: How would you explain your sound though?
JR: It’s therapeutic music. It’s honest, it’s driven with live music and band but it’s also hip-hop. It’s like rock-rap. Inspiration-wise, it’s somewhere between Uncle Kracker and Everlast or as far right as Fred Durst. It’s different.
Mel: Well I’m very excited that you stopped by and thank you for the music!
Follow Jelly Roll on Facebook, Twitter, and Instagram
ARTIST PROFILE: JELLY ROLL – ROCK ON THE RANGE was last modified: November 27th, 2017 by ROCKwell UnScene
0 comment
1
Facebook Twitter Google + Pinterest
Previous post
Next post 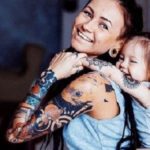