Highly Suspect… as I write this they are on Main Stage at Rock on the Range. This 3 piece went from a bar band doing covers to two Grammy Nominations at the 58th Annual Grammy Awards held earlier this year; “Mister Asylum” was nominated for Best Rock Album and “Lydia” was nominated for Best Rock Song. Meet the band: Ryan Meyer – drums, vocals, Rich Meyer – bass, vocals, and Johnny Stevens – guitar, vocals, synthesizer.

The vocals of the band have a sexy, dirty rock ‘n roll sound, but that isn’t great grandpa Jagger on the mic. Highly Suspect is one of those bands that you have to see live, and when you do, you will be thankful you did. Here’s what the band and their Tour Manager had to say to Rockwell UnScene and Tattoo.com, after they played the main stage at North America’s largest outdoor festival…Rock on the Range!

Mel: You guys kind of have that voice that makes panties fall.

Johnny: We’re just having fun. Our listeners have changed our lives and we’re super supportive of that.

Mel: How does it feel to be back at Rock On The Range?

Johnny: F***ing awesome. This year we’re on the main stage.Mel: That means next year you guys will be headlining.

Johnny: Next year we might own the festival, who knows? It’s no longer Rock On The Range, it’s Highly Suspect Fun Day.

Mel: We should write to Rock On The Range that Highly Suspect should headline next year.

Johnny: Alright, I gotta be honest. We had a lot of fun at one o’clock, but it would be really cool if you guys saw what we did at sun down. We should be on after dark because that’s when it happens. You want rock and roll motherf-rs and we bring it, so hopefully we’ll see you next year after dark.

Rockwell: Did you move to LA? I told you not to, did you?

Ryan: We live on a bus that this guy (their TM) drives.

Johnny: We technically kind of have a place in LA, but we still have our place in New York too.

Rockwell: I would take the bus over LA. I’m out.

Mel: We live in Riverside, so we’re basically neighbors.Johnny: California is amazing, and so is the East Coast. We’re big fans of both.

Tour Manager (TM): The middle is pretty cool too.

Johnny: If you’re in America go to the other parts of America; go to Indiana, go to Montana, go to Seattle, Carolina, Florida, Massachusetts – Just go. Hey, America! We are together. It’s a big place.

Mel: We want to see your guys ink.Johnny: I have this. [Drops Pants.]

Mel: Who did that?

Mel: Do you remember what state you got it done in?Johnny: In Colorado.

Mel: To whoever did that, it’s amazing.

Mel: Anyone else have any ink they want to show?

TM: I have this, it’s a hawk with a trucker hat because I really loved Sylvester Stallone in the 80’s. His name was Lincoln Hawk and he wore a turned around trucker hat. He was like a f****ing machine, he was unbeatable.

Ryan: Did you show them the first tattoo?

Rich: Oh yeah, my MCID tat. We all have them.

Johnny: That means we are all real f****ng people. Our crew is dope and it’s building. Let’s do it. That’s what I’m talking about.

TM: Drop the mic! Interview over. 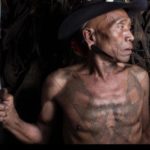