Memphis, TN, home of “The King”, is also home to one of the best, hardest working bands that always turn it up to 11 and always gives 110% to their fans. We sat down with 1 of the 2 founding members, Joey, at Northern Invasion (Somerset, Wisconsin) and talked with him about what’s new with the band, his tattoos, and Mischievous Mel asks him if he wears underwear…

Mel: Hey everybody this is Mischievous Mel here at Day One of Northern Invasion, and I am here with the one and only Devour The Day.  How is catering here in Wisconsin?

Joey: We arrived at noon and we went straight to catering. We had buffalo burgers, which is definitely a Wisconsin thing. I don’t know if you would get that at Rockville or anything like that. We’re feeling very spoiled.

Mel: I’m from Wisconsin, and I can just say you don’t get a body like this without eating cheese. But I stopped eating meat so they kicked me out and I had to go to Cali.

Joey: We had squeaky cheese last night in the tent, and it was strangely addictive.

Mel: Cheese curds, they’re like sex in your mouth.

Joey: It’s strange but yet so good.

Mel: Enough about food, we are here about music. Who writes your lyrics?

Mel: You guys are heavy, but those words are impactual (impactual is a Mischievous Mel word that has no correct spelling because it’s her word!).

Joey: I think the poetry aspect has always been an important part for Blake and I, but more importantly I think speaking from the heart and what you know. Are band, we don’t really have a gimmick, we kind of rest on the music and lyrics. These are all very real stories, and I hate getting through some of that stuff to get the lyrics but it’s worth it. I feel like what better way to be positive than to take those things and tell the world that they happened to us, and that helps other people deal with things. That’s what I think makes us human, otherwise we just exist; eating, working, shitting and sleeping. Telling those stories in transcending time is what makes us different.

Mel: What I think makes you guys different is you get up on stage and you actually sing and play your heart out. Some of these bands have backtracks and empty cabs.

Joey: We just can’t afford the cabs, that’s why.

Mel: It’s amazing to see you guys. You’ve been on the road for a while now, where are you coming up next at?

Joey: Next we’re finishing out a headlining run for the rest of the weekend, and then we have a run out in Oregon for my birthday. We’ll be smoking some fine, fine things, and then we go home for a little bit before we go on tour (which we’ll be announcing soon).
Mel: You have a few tattoos. Would you be willing to show us and tell the story?

Joey: This right here is the gas mask from the very first cover of the Egypt Central record, which most people wouldn’t know that. We actually toured for a long time with that band so that one is very near and dear to my heart.

Mel: You have another tat here. Do you want to tell me about that?

Joey: Yeah, this is from Boondock Saints the original, which is funny because it’s Norman Reedus who ends up becoming super famous in the Walking Dead but when I did it I was like 19 and the second one hadn’t even come out. There was a large bottle of alcohol and I thought it would be a good idea to get it on my trigger finger.

Mel: I’ve never looked at a toilet seat the same since that movie.

Joey: We were actually in New Orleans at Boondocks Bar and I got so drunk that I snorted mints. That’s an awful idea by the way, awful idea. I had a hard time turning down a bet.

Mel: This is a guy we need to meet up with. If I was a fan who never got to meet the band, I would wonder, “Do they wear underwear? And if so, what kind -boxers or briefs? What kind of cereal do you eat?”

Joey: My favorite cereal is definitely Cinnamon Toast Crunch and I haven’t worn underwear in many many
years.

Mel: Is there anything you want to tell the fans?

Joey: Yeah come out and see us – www.DevourTheDay.com  – everything is on there go check it out, and go get the new record. It just came out in April and I think you’ll really enjoy it.
Mel: You heard it here at Northern Invasion with Mischievous Mel! 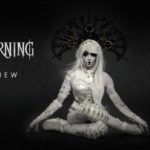