posted by Steph Castor
2016 appears to be a fruitful year for Equal Vision Records as they continue to release dynamic and arousing new albums from their artist roster. The lyrically driven indie alternative band known as ORBS showered the world of independent music lovers with tastefullty chaotic arrangements on their sophomore nine track collection, Past Life Regression, which hit stores on July 15.
Vocalist Adam Fisher layers an impressive experimental approach in the album’s songwriting, especially when compared to his previous metalcore driven band known as Fear Before (the March of Flames). Similar neurotic tendncies can be heard, which donates a flavorful authenticity to the album and the band as a whole.

Past Life Regression is more like a musical representation of severe attention deficit disorder, but in the best way possible. It never gets boring, to say the least. The record’s unpredictability is what draws listeners in, only for them to further appreciate the rapidly changing genres and modest musical expertise.
Tracks such as “Dreamland II” and “Giving Tree Hanging Me” paint a morbidly cosmic picture of deep oak roots intertwining with glimmering stardust.

ORBS creates music that stays true to the band name, however it must be said that the soundscapes are best experienced in small doses to avoid risk of simulated hallucinogenic trips gone awry. While Past Life Regression demonstrates a unique mastery of their craft, ORBS are definitely an acquired taste. But they are one to be greatly loved for those who understand the music’s bigger picture. With all that said, there is one thing I’m entirely sure of- there is no record out there like it.
Rating: 4/5 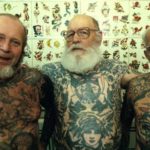