Album Review: ‘Gravity’ by Bullet for My Valentine

Six albums and two decades in, Bullet for My Valentine’s new album ‘Gravity’ is proving why they are and remain on the top of the metal scene worldwide.  Explained by Matt himself (via Spinefarm Records press release),  “While I’ve always been the main songwriter, it’s always been good having Padge supporting when needed… He’d bring ideas to the table, and now with Jason involved as well, it’s been incredible – he can write, sing, play guitar, drum, program electronic stuff, he just lives it. After the success of the last cycle, we clawed our way back up to where we needed to be, but this time we needed to do something people felt we couldn’t do. We had to make a statement – there could be no better time for the rebirth of Bullet. There’s no point relying on old glories to take us forward – that would be unimaginative, uncreative and boring. The history will always be there, it’s in the books. That’s Bullet. But we’ve moved on.”

That sums it up better than I could put it. This album is the musical embodiment of yin and yang. Some tracks are powerfully positive and other tracks are cynical and dark. Those songs seem to be the songs you would hear while huddled in the depths of despair.

I am playing the album as I write this and I have to say that it is on repeat. I did agree with what Matt said about a few of the songs on the album. New offerings such as ‘Letting You Go’, ‘The Very Last Time’, ‘Under Again’ and ‘Coma’ are among those that are guaranteed to mess with heads – marking a departure from the metalcore scene they were instrumental in popularising. It’s arguably the bravest move of their career to date, their ultimate act of defiance. And somehow, a song like ‘Coma’ could also contain one of the heaviest riffs this band has ever put their name to…“That’s a dark track with a lot of weight to it,” nods Matt. “It’s definitely one for those that like broodier, heavier songs. We tried to push the boundaries a bit further on that song with all the electronic stuff and loops. Lyrically, it’s a true representation of where I’ve been over the last two years, unfortunately… but now I’ve come out of the other side.”

I will admit I am a huge fan of the old Bullet style and music. I was fortunate enough to see them perform a new song from ‘Gravity’ live at Carolina Rebellion in early May. I was blown away. It was “Mischievous Mel Approved”. I also got to hear the crowd reaction and they were beyond ecstatic about what was happening on stage. Thousands of fans came together and for the first time had the chance to see the Bullet of today. I will admit when the single “Over It” dropped, I liked it, but it somehow seemed softer to me- it was a different Bullet. I am not going to say better – I am going to say a Bullet that, like the rest of us, have grown up and feel the growing pains of life. Seeing that song live was awesome because it came alive, harder and heavier than I imagined.

“Breathe Underwater” is certainly a softer side of Bullet. But not so soft that they are not themselves. In fact, it is making me love them even more. It is showing me that even the badass has a soft smooshy center. That is tuff to do and still keep your metal reputation, but Bullet has pulled it off.

“The Very Last Time”… Wow! I love the rawness and emotion in the lyrics and how it’s weaved into the music. This song is speaking to me on many levels. Again this is a different side of Bullet, but aside from that, I for one am happy the band was brave enough to unleash.

For old skool Bullet fans, I don’t believe “Gravity” will disappoint. In fact, it will make you fall in love with the band all over again. You will see how deep their talent runs and why they are a band that is not only standing out but leading the way. They have an attitude that is just as epic as their music. The stay humble and kind even at the level they are at.

To recap, Bullet for My Valentine is getting ready to drop their new album ‘Gravity’, out June 29, 2018, on Spinefarm Records. This version of Bullet for My Valentine features new drummer Jason Bowld, but it remains the same badass band that goes from balls to the wall heavy to the softer side of balls to the wall… a gentle mosh if you will.  You will be blown away (I know I was).

‘Gravity’ is a must-have, and I’m sure you’ll agree at first listen. After you buy it, then you need to see them perform it live. They are on tour now and you can CLICK HERE to find out where you can see them live.

Stay tuned to Mischievous Mel and Rockwell Anderson for more on Bullet for My Valentine at The Edge Rock Radio and Tattoo.com. 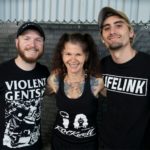