The delightfully inked and mysterious Bay Area babes known as AFI are back at it again with their newest track, “Aurelia,” off their forthcoming full-length, The Blood Album, slated for release on January 20th via Concord Records.

In celebration of their tenth studio album, AFI have also announced a string of upcoming tour dates in support of the record, which was masterfully produced by AFIs very own Jade Puget as well as Matt Hyde.

Check out upcoming AFI tour dates below with special guests Chain Gang of 1974, Nothing, and Souvenirs.

All shows feature Souvenirs as the opener 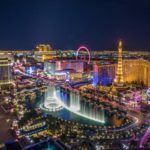