The sitcom is one of the most American things that exist. It’s something that people of all backgrounds, ages, economic status, you name it, can sit down, have a laugh, feel emotions, and relate to one another on a different level. There have been many sitcoms since they started, all with different plots and stories and all to entertain and reach into peoples’ lives and hearts through a television screen. If I were to ask most of you reading this post to think about some of your most warm family memories, I’d bet that many of you would automatically think about sitting around with your family, probably on a Friday night, laughing watching a sitcom together and eating snacks. What is your favorite sitcom and why? Would you ever get a tattoo from your favorite sitcom? That is exactly what the people on this list did. They are superfans and have that warm, cherished time of watching sitcoms permanently tattooed on their body to remind them of that feeling.

Are you thinking about getting a tattoo of your favorite sitcom? Check out the following 15 best sitcom tattoos for ideas and inspiration:

The hilarious show “Scrubs” is another fan favorite, here with its two main characters and best friends.

One of the funniest shows on television is “Curb your Enthusiasm.” It is one of the crudest, foul-mouthed shows out there, and Larry David will have you love him and hate him, all while trying not to piss yourself from laughing.

Steve Urkel from “Family Matters” is probably one of the most iconic characters associated with the word “sitcom” of all time. Remember “TGIF” on Friday nights after work? Yeah, those were good times!

Who isn’t a fan of “The Office?” Now, the bigger question, are you a bigger fan of the American version or the British version?

Seinfeld is one of the most popular and long-running sitcoms ever, and with good reason. It was almost a travesty when the last episode aired.

“Sanford and Sons” was a unique sitcom, and hilariously relatable. You couldn’t help love the characters and all their quirks.

Another I Love Lucy tattoo, this time of Desi Arnez.

Doesn’t everybody love to go where everyone knows their name?

Another Seinfeld tattoo, this time with George “CO-STAN-ZA.”

“Always Sunny in Philadelphia” is represented here with this hilarious yet also realistic black and gray tattoo. 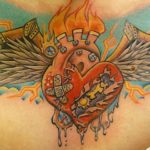