Metallica is one of the most well known heavy metal bands in the world, and for good reason. Formed in 1981 by James Hetfield and Lars Ulrich, their unique sound has garnered fans ever since. With their new album out, Metallica fans are excited once again. Some fans take their love for this band to the next level in the form of permanent ink. Some Metallica tattoos truly stand out, and that’s what this list is all about. We’ve compiled 13 of the best Metallica tattoos out there. Are you thinking about getting a Metallica tattoo? Not sure what kind of design you want? Check out these 13 Best Metallica Tattoos for ideas and inspiration:

A similiar concept as the previous Metallica full sleeve, this Metallica tattoo is another metal masterpiece.

With James Hetfield at the very top, using those amazing vocals, this full Metallica tattoo sleeve is a realistic black and gray work of art.

Gorgeous shading and detail went into this black and gray full back Metallica tattoo. We bet that fan is insanely proud to show off this piece!

The Metallica symbol, plain and simple, in dark black ink.

Hyper realistic portrait of Hetfield, doing what he does best.

Here is another Hetfield portrait, from earlier days of the band.

This Metallica fan also has a portrait of James Hetfield, and quite a bold and graphic style at that, as well as the name of his favorite album.

A James Hetfield portrait inked by the ever impressive Liz Cook? Too cool.

Here’s that symbol again, but taken way up a few notches, done in a 3D realistic style.

The color in this tattoo is simply amazing.

This fan’s favorite album is clearly “Ride the Lightning.”

Tattoo by Xam The Spaniard 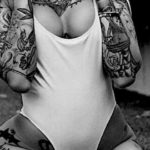