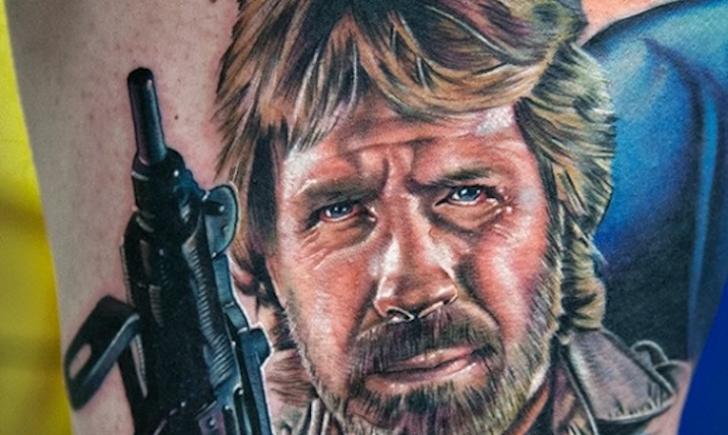 We all know Chuck Norris kicks all kinds of ass. He is the icon for toughness among men for many. It is no surprise that some people have decided to take their idol worship of their favorite tough guy and gotten Chuck Norris tattoos! Do you know someone with a Chuck Norris tattoo? Comment below! We’d love to see it!

Are you considering getting a tattoo with Chuck Norris’s likeness on it? Are you a superfan? Check out these 10 Kick Ass Chuck Norris tattoos for ideas and inspiration:

Using the left as a reference picture, we see the realistic black and gray portrait tattoo on the right. Well done!

Some fans like his later work on “Walker Texas Ranger” best, and so here we see Chuck in a cowboy hat in his well known roll.

Of course, there had to be one of these punching arm tattoos with Chuck Norris! Super cool!

Don’t mess with this tattoo enthusiast, cuz Chuck’s got his back!

Done in just black ink among some other ink, we see that serious Chuck Norris face.

Chuck Norris at his best, doing what he loves, kicking ass!

A more serious black and gray portrait of Chuck.

Chuck Norris in all his glory here in a full color, realistic portrait.

Another realistic black and gray portrait, with his shirt completely unbuttoned yet tucked in. Classic!