For the most part, tattoos are awesome. They are meaningful, they are personal. They are interesting, and cool. But sometimes, tattoos can set off an involuntary response, or have an ick factor to them. This factor is the common denominator in the tattoo pictures of this list. For better or worse, check out these 10 gross tattoo pics:

We have to admit, this is pretty cool, especially when you realize that the “shadows” are also part of the tattoo. That being said, definite ick factor here. The placement really helps with the effect, which is intentional. If you are touching one of your clavicles right now, this tattoo artist has done his or her duty.

There’s no doubt that this tattoo is awesome. I’m not saying that it’s not, because it is really impressive. But the idea that there is no skin layer and that we are looking directly at the working musculature is a bit unnerving don’t you think?

You can tell that the intentions behind this tattoo were goo, but the execution and the placement are just all wrong. I’m actually frightened by this one. It’s like a half formed face attached to his actual face.

Again, here is an example of a pretty awesome tattoo, but come one, the ick factor is definitely here! Double points for the facial hair looking like a raised eyebrow.

Completely unnerving is this giant crying cyclops eye tattooed on the back of this tattoo wearer’s head.

That’s great that you love Kim. We are all about love. But really, does everyone need to know what she LOOKS like? Perhaps if the tattoo were done better it wouldn’t be so gross.

Probably the grosses tattoos of all have infections or major keloids. It’s important to go to a good tattoo artist that knows what they are doing and are up to date with all of the hygiene procedures when it comes to ink. You do not want your ink to be riddled with infection or keloids.

Yes the subject matter is gross, but well done. This tattoo pic gets a double whammy and is on this list because look at those feet and toenails? UGH!

Gross yes, but also kind of cute. There are things with that combination that make you feel weird inside. Again though, those toenails!

Here is another tattoo that is pretty good, but the location is making me cringe! OUCH!

Lastly we have the infamous tattoos of Miley Cyrus all over a crazed fan that SHE herself was NOT a fan of. 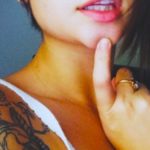