If you’re a fan of The Walking Dead, then you know exactly who Negan is. Love him or hate him, he’s got charisma! He’s easily the scariest villain yet for the series. We have shared many tattoos from fans of the Walking Dead, but this post is dedicated to everyone’s favorite evil post zombie apocalyptic villain, Negan. Of course, most of the Negan tattoos out there are actually of his precious Lucille (his barbed wire bound baseball bat), so maybe this post is really dedicated to Lucille instead!

Are you a fan of The Walking Dead? Is your favorite and most hated character Negan? Not sure how many people out there would consider getting a Negan tattoo, but if so, you might get some ideas and inspiration from the following 10 bloody Negan Walking Dead tattoos. And if you would never consider it, enjoy looking at them anyway. LU

Classic Lucille, with blood on her from a fresh kill.

Here’s artwork from the comic, in mid-swing, with comic letters saying “KRAKK!”

Here’s another tattoo dedicated to the “THIRSTY” Lucille.

Does this tattoo bring back any terrible memories from the first episode of the most recent season?

Lucille next to a not so fresh kill of a cracked skull.

Straight from the comic, this horror filled scene in the television series followed very closely to the actual comic sequence. 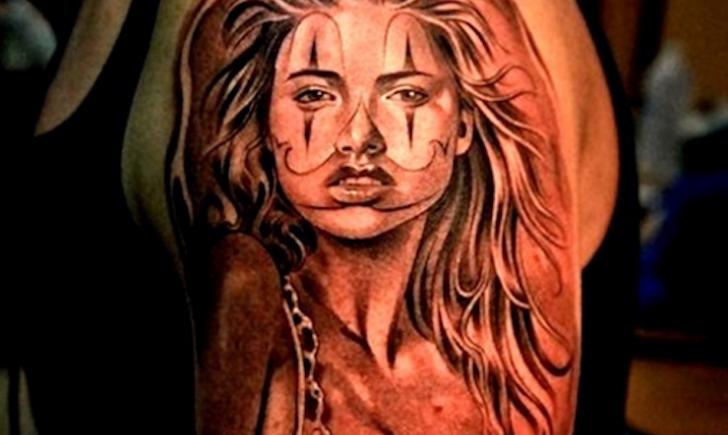