What better icon for the winter season than the snowman? He embodies the frostiness of the season, as well as the playfulness and nostalgia. A snowman immediately makes us think about Christmas and winter breaks. For some tattoo enthusiasts, this winter symbol means even more, and they have decided to make the snowman the center theme of their tattoos.Their love of the snowman shines through in the following tattoos, expressing their own feelings and ideas. Are you thinking about getting a snowman tattoo? Check out the following 10 best snowman tattoo ideas for inspiration!

Who remembers this abominable yet oh so friendly snowman from Rudolph the Red Nosed Reindeer movie (1964)? A classic Christmas film, with this gentle giant being one of its most beloved characters has been seen by millions of children around the world.

This classic snowman is seen against a bright pink sky with snowflakes falling all around him in a lovely winter scene.

The detail in the snowflakes coupled with the mainly blue and green (with a pop of red in his scarf and hat) makes this tattoo charming and eye catching.

This list would not be complete without a tattoo of Olaf, right? Here he is sitting gleefully on this enthusiast’s arm.

Here’s a clever way to create a tattoo that allows you to “build” a snowman anytime you want! Just make a fist! He looks a little surprised, but all is good with his cup of hot cocoa.

Here’s a different kind of snowman, a quite creepy one, with blood against his snow white body. Not sure what those two creatures are at the bottom, but something tells me they’re not made out of snow like he is.

This rather large side tattoo is absolutely breathtaking. This snowman is truly in a winter wonderland with blustery snow gusts and intricate snowflakes floating all around him. He stands tall and proud with his mighty broomstick. The limited color palette of blues and whites work really well.

This simple and cute little snowman from Calvin and Hobbes is just looking at a snowball with confusion.

To end this list, we have an epic snowman battle between two snowman tribes, taking up the entire upper back of this snowman and tattoo enthusiast. 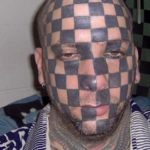