Tattoo.com and Danny Wimmer Presents (DWP) proudly present emerging artist of the week, Young Guns, and alternative rock band formed in High Wycombe, Buckinhamshire in 2003.  In the past six years, the group has released three full-length albums. Their newest album, “Echoes“, is set to drop September 16, 2016 via Wind-Up Records. Young Guns is well known for pumping out apocolyptic-themed songs; their sound has been compared to LostProphets and Taking Back Sunday.

In addition to Vans Warped Tour, Young Guns will be performing at Houston Open Air, Monster Energy Rock Allegiance, and Louder Than Life.

Click below to watch the official lyric video “Mad World” 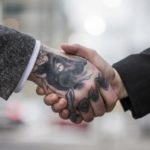