Day 2 of MUSINK 2017 started before doors opened at noon for us, because we were on a mission to interview some of the best tattoo artists before fans/clients were allowed entry.  We were successful in our mission in talking with three of the artists from 3 different states.  Stay tuned to Tattoo.com to find out who they are and to see examples of their world class art.

MUSINK as you should know, gets its name because it is also a music festival, and day 2 featured 5 bands including Hell or Highwater (featuring Brandon Saller of Atreyu), Story of the Year (whose interview will also be coming to Tattoo.com soon), Goldfinger with guest drummer and MUSINK title sponsor Travis Barker, Glassjaw, and The Used headlining the day. 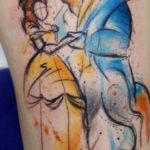